Hannah Oliver Depp is now the owner of Upshur Street Books, which will be rebranded as Loyalty Bookstores. 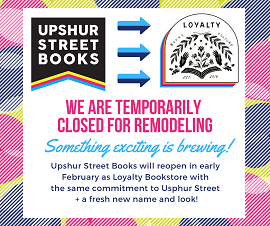 [words] Bookstore in Maplewood, New Jersey, is celebrating 10 years in business on Saturday, February 2, with a discount, treats, balloons, giveaways, and more.

For the third year in a row, Avid Bookshop in Athens, Georgia, appeared on the annual Bulldog 100 list, which recognizes the 100 fastest-growing businesses owned or operated by University of Georgia alumni. Bookstore owner Janet Geddis earned her M.Ed. from UGA in 2006. “I’m delighted by the honor,” said Geddis. “When my independent business is recognized for both the tangible and intangible benefits we bring to our community, it shines a light on all independent businesses that are providing cultural and economic benefits to their regions. Thanks to our customers nationwide, we have seen tremendous growth since our first shop opened in 2011, and we have been able to provide fulfilling jobs for our staff, many of whom are UGA graduates.”

Local Connecticut’s list of “20 Bookstores To Visit In Connecticut” included Books on the Common in Ridgefield, RJ Julia Booksellers in Madison and Middletown, River Bend Bookshop in Glastonbury, and many more.

Luisa Smith, buying director of Book Passage in Corte Madera and San Francisco, California, will serve as editor-in-chief of Scarlet, a new mystery publisher created by Otto Penzler of The Mysterious Bookshop and Pegasus Books.