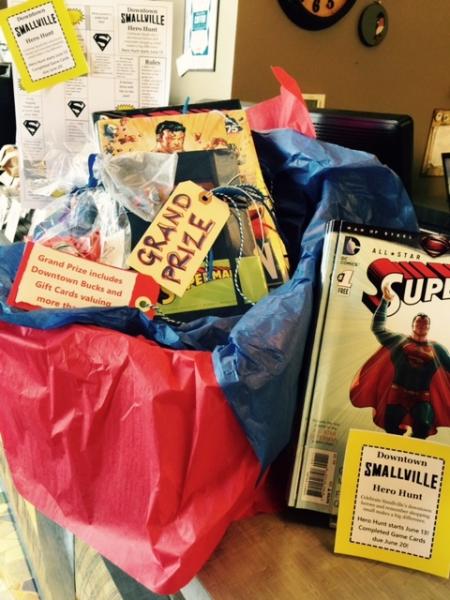 The Find Waldo Local event at Bluebird Books in Hutchinson, Kansas, was such a hit last year that organizers of the city’s annual Smallville Festival asked the store to create a spin-off: a Superman-themed Shop Local scavenger hunt.

The Smallville Festival, during the third week in June, celebrates the town of Hutchinson’s claim to be the home of Superman. Residents consider their town “the literal equivalent of the fictional town of Smallville, Kansas, where Superman grew up,” according to Bluebird Books owner Melanie Green.

In response to the request, Bluebird created the Downtown Smallville Hero Hunt. The event began at Bluebird Books, where scavengers received a free Superman comic book and a card with riddles that led to participating businesses, or, as Bluebird referred to them, Hutchinson’s “downtown heroes.”

“Participants matched their clues on a game card and found the downtown heroes,” said Green. “This is the first year we have done it, and it was a great success!”

Participants were then entered into a drawing for D.C. Comics merchandise and gift cards from participating merchants.

Burke’s Book Store in Memphis, Tennessee, is marking 140 years in business this year. Cheryl Mesler, who owns the bookstore with her husband, Corey, attributes the bookstore’s longevity to its 2006 relocation and its ability to change with the times, Memphis Magazine reported.

The Meslers purchased the bookstore in 2000 and have seen business boom since its move within Midtown Memphis nine years ago. “Moving here has been fantastic. Sometimes I think all we have to do is open the doors,” Mesler said. “We’ve been lucky, but the real secret is digging in your nails and staying with it. We’re dinosaurs and slow to change. But we adapted. Our inventory today is very different from when I started here.”

Since taking over the bookstore, the Meslers have extended the shop’s weekend hours and have launched an online bookstore; they are currently discussing purchasing a tricycle to enable the shop to make book deliveries in town.

“The biggest [challenge] is trying to convince people to shop here before they go to Amazon,” Mesler said. “We try to educate people that keeping the money here in Memphis makes a difference.”

Co-owners Susie Fruncillo, Faith Basten, Nancy Thysell, and Roberta Kiemele have all been with the store for more than a decade. The team is the second generation of owners, following the five female founders who opened the store in 1980.

“All four of us are here because we love this business,” Fruncillo told the Pioneer Press. While the owners hope to keep the bookstore in business for another 35 years, Fruncillo acknowledged the difficulty of that prospect.

“We are important to the community,” Fruncillo said. “People would be upset if we weren’t here anymore.” Customers come from several communities to visit the bookstore, which hosts a variety of author events (some in conjunction with the weekly farmers’ market); sells new, used, and self-published books; and features a bright chalkboard highlighting staff picks.

“Our customers are educated people who take literature seriously,” said Fruncillo. “A few customers on Manitou Island who live here part of the year think they are single-handedly supporting the store.”

June’s issue of Utah Business magazine looked at how businesses in the state square off against online retail behemoths and highlighted in particular Salt Lake City’s The King’s English for its strength in building relationships with customers to keep them shopping locally.

Customers visiting The King’s English rely on store staff for recommendations — rather than an algorithm — co-owner Anne Holman told the magazine. “There’s no substituting people. If you’ve been a customer for a long time, we know what you like, what your kids like.”

Holman also noted the importance of selling items online to stay competitive — the bookstore has added e-book sales through Kobo and is looking into textbook and audiobook sales — and in leveraging social media platforms including Facebook and Instagram.

Ultimately, explained Holman, The King’s English makes a point to offer a unique experience to its customers, while also giving back to the community by supporting local fundraising efforts and organizing community events for all to enjoy.

5280 Magazine talked with Tattered Cover Book Store owner Joyce Meskis about the two-year ownership transition beginning this summer that will see Meskis retiring and the passing of the reins to the Denver, Colorado, bookstore to new owners, Len Vlahos and Kristen Gilligan. Meskis has owned Tattered Cover since 1974.

“I wanted it to be left to the right people. They are perfect for the Tattered Cover,” Meskis said of the incoming owners. “These people are committed to the industry: Both have spent their careers in the book business and understand community. They know the blessings and curses. Often people have a dreamy feeling about owning a bookstore, and they don’t realize how hard it is.”