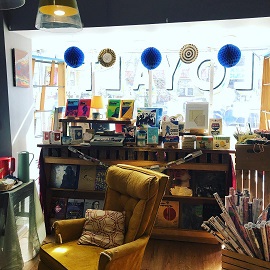 A look inside Loyalty Bookstore.

Caprichos Books in Bel Air, Maryland, is one of the inaugural tenants in the Armory Marketplace.

Peter Albertelli will be taking over as owner of BookTowne in Manasquan, New Jersey.

Andersons, a bookstore in Larchmont, New York, was reported to be thriving “after adding space for community gatherings.”

Gulf of Maine Books in Brunswick, Maine, will celebrate its 40th birthday on February 23.

City Lights Booksellers & Publishers in San Francisco, California, will celebrate co-founder Lawrence Ferlinghetti’s 100th birthday throughout the month of March. A full list of events can be found here.

Old Town Books was recognized for being a “cozy community nook” in Alexandria, Virginia.

Books Are Magic owners Emma Straub and Michael Fusco-Straub were featured in a video called “How to Run a Neighborhood Bookstore.”

WJLA reported on the blind date with a book program at Curious Iguana in Frederick, Maryland.

The Daily Trojan featured the article “The Black Cat: Eso Won Books allows me to reconnect to my roots,” about Los Angeles’ Eso Won Books.