Root & Press will open in Worcester, Massachusetts, on Saturday, May 18. 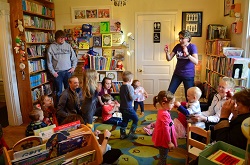 Attendees at the special Kindermusik storytime event held at Afterwords Books on May 11.

Paper Boat Booksellers will open in Seattle, Washington, this summer.

Afterwords Books in Edwardsville, Illinois, celebrated its 10th birthday by hosting a Customer Appreciation Day on May 11. Friends of the bookstore were treated to delicious cookies whipped up by a local bakery, t-shirt giveaways (custom printed by a local company), a special Kindermusik storytime event, and 20% off their purchases.

The Fountain Bookstore in Richmond, Virginia, was included in Southern Living‘s South’s Best Bookstores list in the magazine’s May issue.

Barbara’s Bookstore, The Book Cellar, and RoscoeBooks were included in an article titled “Reading local: Don’t turn the page on some of Chicago’s best bookstores.”

amNY.com covered The Lit. Bar in an article titled “The Lit. Bar, the Bronx’s only general interest bookstore, can ‘empower’ the borough, owner says.”

Kathy Burnette, owner of The Brain Lair, in South Bend, Indiana, spoke with the South Bend Tribune about selling diverse and inclusive books.

Half Price Books in Indianapolis, Indiana, collected thousands of books for children in need.

Reads & Company in Phoenixville, Pennsylvania, was covered in an article called “‘Amazon be damned’: Two guys are giving Phoenixville a bookstore. They may be nuts — or brilliant.”

Johns Creek Books and Gifts in Georgia was featured in an article called “Bookstore opens doors to Johns Creek community during library renovations.”