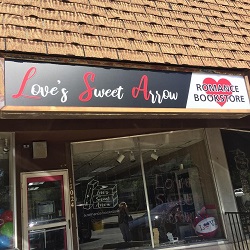 Page 1 Books in Evanston, Illinois, has opened a brick-and-mortar storefront.

Avoid the Day, a pop-up bookstore in Rockaway Beach, New York, will be testing a storefront through July 7. The store is also hosting a fundraising campaign to help raise money for a permanent storefront.

Idle Time Books in Washington, D.C., has been renamed Lost City Books by new owner and operator Adam Waterreus. On buying the store, Waterreus said in a press release, “Lost City Books will remain true to the core of what Idle Time Books was — a place for the bookworm and the intellectually curious, a bookstore engaged in culture both past and present, and a place full of unique and rare books — but we also intend to update the store and to revive it as it enters the next phase of its life in this neighborhood and in this city.”

Children’s Book World in Haverford, Pennsylvania, is celebrating its 30th birthday on Saturday, June 29, with a Birthday Read-A-Palooza.

The Well-Read Moose Bookstore and Café in Coeur d’Alene, Idaho, is celebrating its fifth anniversary.

LA libreria was featured on a list of five Latino-run bookstores in Los Angeles.

Petunia’s Place was mentioned on a list of the top bookstores in Fresno, California.

Dickens Children’s Books and Publishing in Vancouver, Washington, was featured in a segment on KOIN 6 News.

Hoodline looked at the best bookstores in Louisville, Kentucky, and in Portland, Oregon.