The Country Bookseller in Wolfeboro, New Hampshire, celebrated its 25th anniversary on July 1. 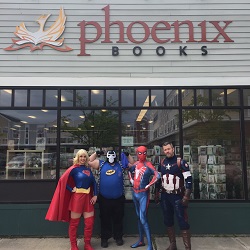 Women & Children First in Chicago, Illinois, will celebrate its 40th birthday on August 24 with a summer block party.

Wicked Good Books in Salem, Massachusetts, is celebrating its fifth anniversary this month.

Phoenix Books in Essex was visited by the Guardian Legion, a Vermont-based cosplay and charity group, on June 15, and about 60 people (including around 40 kids) stopped by to meet their favorite characters.

That Book Store in Wethersfield, Connecticut, was featured in a news segment titled “WorkinCT #CTConfident: That Book Store providing a community gathering place around the rows of books.”

A Room of One’s Own in Madison, Wisconsin, launched a fundraiser for #BookstoresAgainstBorders to benefit RAICES (Refugee and Immigrant Center for Education and Legal Services), an organization working to help detained refugees, including children, at the U.S.-Mexico border. Bookstore owner Gretchen Treu is also celebrating the first anniversary of her purchase of the store this month.

The Austin Chronicle published a list of 10 must-visit indies in Austin, Texas, which included BookPeople, Malvern Books, and BookWoman.

A number of indie booksellers appeared on the Kojo Nnamdi Show for a segment called “Every Trick In The Book: How Local Bookstores Build Community.”