Busboys and Poets, which has locations around Washington, D.C., will open a new, two-story location outside of the city. 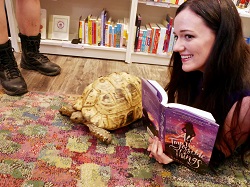 Lindsay Lackey, author of All the Impossible Things, posing with a special guest tortoise.

Commonplace Reader in Yardley, Pennsylvania, will host its grand opening on September 14.

Murphy’s Used Books and Media in Kettering, Ohio, has announced it will stay open.

Co-owners of Unlikely Story Bookstore & Café Jeff Kinney and his wife, Julie, have purchased a site across the street from their Plainville, Massachusetts, store; for now, it’s going to be used as storage for the bookstore while the two develop long-term plans.

Ellen Ourada of Wild Rumpus in Minneapolis, Minnesota, is set to retire after 17 years with the bookstore.

Hannah Oliver Depp of Loyalty Bookstore in Washington, D.C., wrote an article for the Washington Review of Books titled “We Need Diverse Bookstores!”

Boogie Down Books in the Bronx, New York, has partnered with two organizations to help provide incarcerated teens with books.

Actor, writer, and curator Lexie Bean has been selected as a recipient of the Bookshop Santa Cruz Writing Residency.

A two-day book fest called “The Book” will be hosted at Casa Camino Real Bookstore in Las Cruces, New Mexico. The event will begin on Friday, October 18.

Second Star to the Right in Denver, Colorado, hosted the book launch for Lindsay Lackey’s All the Impossible Things.

Hideaway Used Books in American Fork, Utah, was featured on a list of 9 Utah County bookstores.