The latest episode of On Point, called “Indie Bookstores, Once on the Verge of Disappearing, Are Making a Comeback,” featured a conversation between Wi15 keynote speaker Ryan Raffaelli and ABA president Jamie Fiocco.

In Washington, D.C., Idle Time has reopened under the name Lost City Books. The store will host its grand reopening on February 29 with food, live music, and an exhibition of local artists, among other festivities. 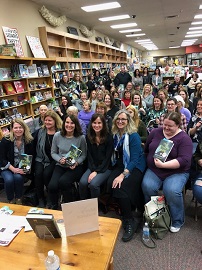 A full house for Mary Kubica's event at Anderson's Bookshop.

The Mustard Seed Bookstore in Bath, Maine, has been sold to employee Terri Shurz, who will open Mockingbird Bookshop in its place.

The Book Haven in Salida, Colorado, is under new ownership.

Barbara’s Bookstore has moved to a new location in Burr Ridge, Illinois.

Matt Miller, chief operating officer of Tattered Cover Book Store in Denver, Colorado, will retire on June 30. Kate Rothery, general manager at the store, will assume many of his responsibilities.

The Phoenix Bookstore is bringing “more than literature” to its Laredo, Texas, community.

Mary Kubica visited Anderson’s Bookshop in Naperville, Illinois, to celebrate the launch of her new book, The Other Mrs. (Park Row).

Nicola’s Books in Ann Arbor, Michigan, was featured in an article called “Staying Power: How Nicola’s Books has thrived despite book industry turmoil.”