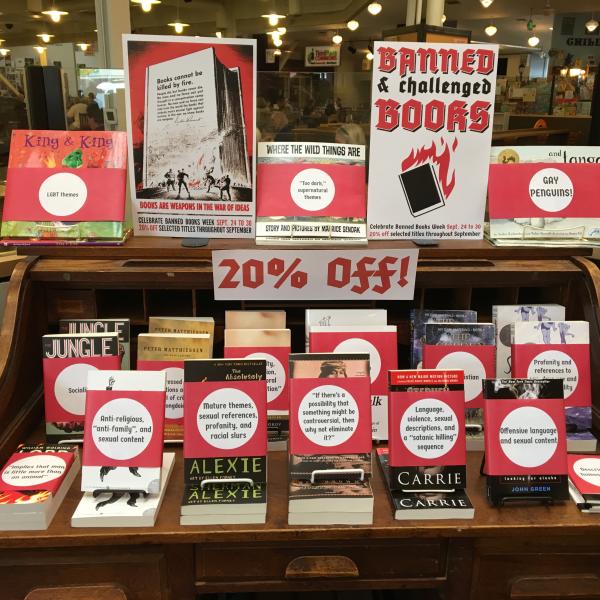 Banned and challenged books are 20 percent off for the entire month of September at Third Place Books, where customers can discover them in eye-catching displays designed to inspire spirited conversation about the First Amendment’s guarantee of free speech.

“What bookstores do at their best is provoke conversations and look at things outside their normal comfort zone. That’s what good books do, and what good bookstores do,” said Robert Sindelar, managing partner of Third Place Books and president of the American Booksellers Association Board of Directors. 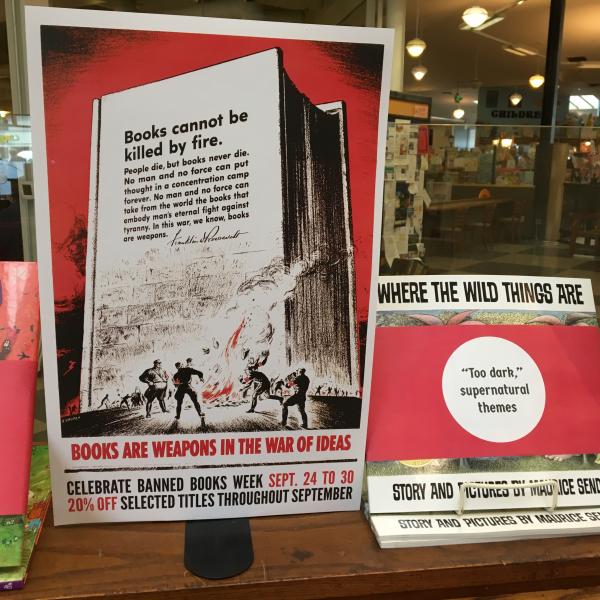 Third Place Books' provocative display was designed to remind customers of an era when books were burned to silence dissenting views.

Third Place Books’ staff designer tapped into the zeitgeist to create a display featuring a typeface that brings to mind Nazi Germany and propaganda from that era, Sindelar said.

“We had an offended customer who said, ‘Why did you chose this Mein Kampf font for this?’” said Sindelar, who replied with a reminder that Nazis burned books they didn’t like and that evoking that past is a deterrent to repeating it.

“It is jarring and uncomfortable to look at those images. That was the point,” Sindelar said.

Like Sindelar, booksellers across the country are readying Banned Book Week displays, events, and social media campaigns designed to spark debate and reflection about the nature of censorship and the rights of citizens to select their own books.

Charles Brownstein, chairman of the Banned Books Week Coalition, said the event gives the public a yearly reminder of something we all take for granted: free speech.

“We’re encouraging communities to join together in the exploration of the free expression that makes the United States the diverse country that it is,” he said.

Booksellers can facilitate that conversation. There are ample resources for both the public and booksellers on the Banned Books Week Coalition website, including shelf-talkers, activities, and signage, Brownstein noted.

“It’s a really good idea to bring members of your community together to exchange views in the safe, mediated space of conversation and reading,” he said.

The American Library Association’s Office for Intellectual Freedom reported that complaints about book censorship were up 17 percent in 2016.

“It’s about awareness and education. I’m trying to get as much info about banned books and how it’s still happening into the hands of our customers and the general public,” said Jenny Lyons, the sales and marketing manager at The Vermont Book Shop in Middlebury, Vermont.

Local paper artist Sarah Pope designed a window that features brown-paper-wrapped books imprisoned in a wire cage that will be up for the whole month.

“It’s right on Main Street, so it’s very visible,” Lyons said. “People are always very interested to talk about it. They are always surprised about the books that are banned.”

Booksellers can highlight ALA’s top 10 most challenged books of 2016, or choose from the hundreds of titles throughout the years that have faced the threat of censorship over their ideas, language, or images.

“Librarians and booksellers view those challenged books as something we have to pay attention to now,” Beach said.

Beach also plans to feature the classic Go Tell It on the Mountain (Knopf), a 1953 semi-autobiographical novel by James Baldwin, because her wife’s hometown high school in Hudson Falls, New York, challenged the book as a required reading text in 1994.

“We found that the conversations our customers have with each other while looking at the displays are very interesting,” Beach said. “Encouraging these conversations is important, especially here in New York City. Here, there is much less pushback about the kinds of books that get challenged. We are reminding people in Queens and the city that we are a country with people with a lot of different opinions.”

As a bookseller, Beach said she is mindful of free speech whenever she grapples with which titles to put on her shelves, whether it’s a classic from a bygone day when racial issues were handled less sensitively or a modern author with controversial views.

“As booksellers, we are tastemakers in our own small communities, and we have to make those decisions every day,” Beach said. “It’s an important one, and one that we take seriously. I try to listen to staff concerns when a new book is coming out. There is a lot of input. Ultimately, as long as I’m meeting my customers’ needs, I think I’m doing it right.”

In celebration of this year’s Banned Books Week, Ingram is offering a special promotion to independent bookstores.

From August 31 to October 5, booksellers can take advantage of an additional discount on initial orders of 25 or more books on a list of more than 450 banned and challenged titles on ipage®, Ingram’s search and order content platform, as well as on subsequent orders placed during that time.

For more information about the discount, stores should contact their Ingram sales representative, call Ingram Customer Care at (800) 937-8200, or e-mail orders@ingrambook.com.

To aid in promoting Banned Books Week, booksellers can access a variety of downloadable materials in BookWeb’s DIY, including counter cards, social media images, bookmarks, web banners, and more (a username and password are required to access the materials; stores needing login details can e-mail info@bookweb.org).