At the Bronx Book Fair panel “The Bronx ‘Book Desert’: Fighting Back Through Public Libraries and New Bookstores,” members of the literary community came together to discuss the lack of bookstores in the Bronx and how the borough is responding. 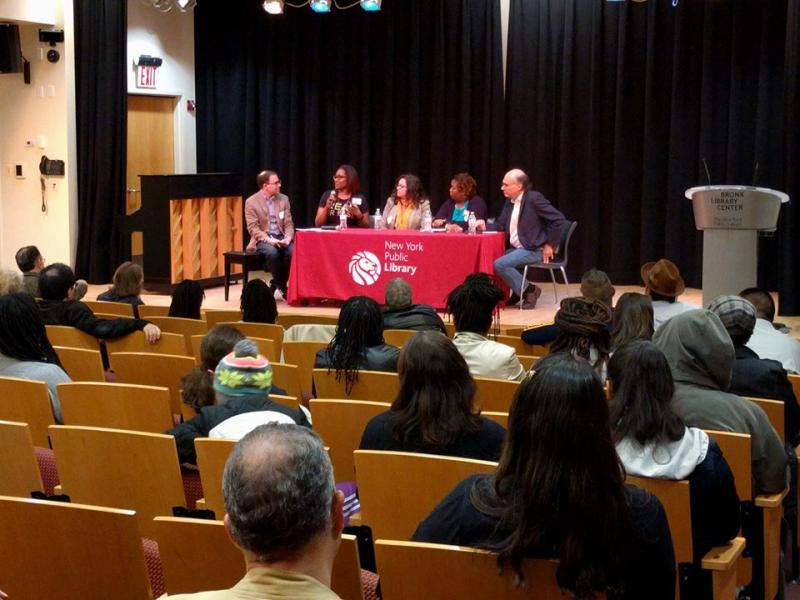 The May 6 panel featured Oren Teicher, CEO of the American Booksellers Association; Noëlle Santos of The Lit. Bar, a bookstore/wine bar coming to the Bronx; Melissa Coss Aquino of Bronx Community College; and Gesille Dixon, director of Bronx libraries for the New York Public Library. The panel was moderated by Robert Farrell of Lehman College. Following the panel, Teicher, Santos, and Farrell talked with Bookselling This Week about some of the highlights of the event.

The panel kicked off with a discussion about whether the Bronx is, in fact, a book desert: a geographic area in which access to books and reading material is limited. “The point was made that public libraries are serving a critical role in the borough, but with the lack of retail bookstores, including the closing of Barnes & Noble in Co-op City, there’s been a gap in the literary community,” Farrell said.

During their discussions, the panelists noted that bookstores provide children with a different kind of experience: One that allows them to connect with booksellers who can help them discover new titles in an environment that functions differently from a library and where they have the possibility of purchasing and taking a book home to keep, said Farrell.

Santos acknowledged the libraries that serve the reading population of the Bronx, but she believes that the borough needs more options for readers. With the theme of “graffiti and chandeliers,” The Lit. Bar will serve a niche market in the Bronx, she said, but she hopes other bookstores will open in the area so that they can band together to attract big-name authors and participate in literary events, such as Independent Bookstore Day.

“I learned a lot from the panel,” particularly about the services public libraries offer and the type of readers they serve, Santos said. But being on the panel also allowed her to share what will make The Lit. Bar different.

“I’m selling the same titles as everyone else but I’m packaging it differently, and the wine bar will allow me to do traditional and nontraditional bookstore events,” she said. “I’m a millennial; I represent my market, so that gives me a great advantage to bring something different that the libraries don’t offer. Incorporating Bronx culture and hip hop is a way to bring a young and more vibrant feel to the industry. Reading has always been cool, but sometimes you have to present it differently to the youth.”

Teicher said that “it was exhilarating to see such enthusiastic book lovers coming out on a beautiful Saturday afternoon — and to see such strong support for Noëlle Santos and The Lit. Bar, as she continues her work toward opening an independent bookstore that will reflect and serve readers and book buyers in the Bronx.”

The panelists recognized the value of libraries collaborating with bookstores, said Farrell, as well as the unique role that libraries play in places like the Bronx, where their reach is extensive and where literary events take place throughout the year. “The libraries do a huge amount of work to promote literature and increase literacy levels,” he said. “For our borough, in particular, the library is essential.”

In a borough of 1.4 million people across 47 square miles, “it’s just absurd that there are no general retail bookstores,” Farrell added, especially considering the many educational institutions in the county and its notably vibrant literary community, which is one of the things that the Bronx Book Fair seeks to highlight each year.

About 550 people attended the fair, which is in its fifth year, said Farrell, and many attendees reflected the demographics of the neighborhoods surrounding the event, which was held at the Bronx Library Center, a branch of the New York Public Library. Every panel or workshop at the fair featured or was facilitated by a Bronx resident, Farrell noted.