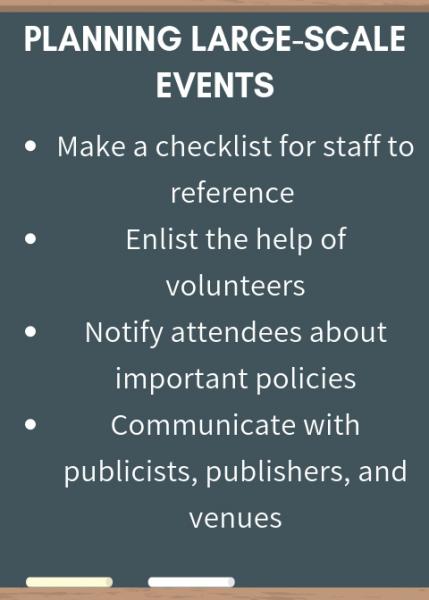 Four booksellers served on a panel at the American Booksellers Association’s sixth annual ABC Children’s Institute to discuss how they organize large-scale author events both in their stores and offsite.

For booksellers who have yet to book a large-scale event and are looking for where to begin, one of the first steps is writing a proposal to submit to publishers on Edelweiss.

“Everything I put in my proposal is aimed at reassuring them that we know what we’re doing and we’re not going to drop the ball,” said Appell, who shared specific aspects of Parnassus Books’ proposal for The Book Thief author Markus Zusak. “We talked a lot about the price point for the book and who the publisher is interpreting as the audience. We also put a lot of thought into what venue we were going to propose.”

Appell added that it’s helpful for booksellers to include if their store has hosted any comparable authors from the same publisher or genre, which can help support the store’s track record for hosting successful author events.

While communicating can sometimes be difficult, an author’s publisher can usually answer many of the questions booksellers might have when planning an event. If they can’t, Hebert added, it’s because they might not have an answer themselves. Booksellers should treat their relationships with publicists as a team effort.

Publicists can also tell booksellers their expectations for a specific event, which can help with the planning process. Hebert recommended asking publishers how many books they’d like to sell and how many people they’d like to have in the audience. She added that some publishers prefer seeing packed venues over sales.

When choosing a venue, the panelists suggested that booksellers pay attention to accessibility. If a venue isn’t fully accessible, the panelists noted that they would not book it in favor of one that can meet the needs of all of their customers.

Additionally, the panelists urged booksellers to watch for hidden fees that might come with certain venues in addition to rental costs. Before deciding, booksellers should ask the following questions:

Hebert added that some authors also require security, which can come at a large cost. While some publishers will help offset the cost, others might not. Booksellers should be aware of how much they’re responsible for early in the planning process. If possible, booksellers should try to build a relationship with venues that they regularly use, as this can also cut the cost of future events.

One way to help offset costs is to partner with a nonprofit. At Red Balloon Bookshop, Whited sends half-sheet fliers to local elementary and middle schools to advertise events that take place during the school year. Libraries can also help with event promotion.

In regard to how to ticket large-scale events, there are multiple ticketing agencies that booksellers can use. The panelists cited Eventbrite and Brown Paper Tickets, which both offer services to process credit cards and keep track of tickets sold. Booksellers can also use these platforms to easily e-mail customers updated information about the event.

Online ticket agency services allow booksellers to create a variety of ticket options. The panelists noted that booksellers might also consider offering a bundle ticket option that includes a book in the price of a ticket, which can boost book sales. For children’s events, Appell recommended creating a cheaper “companion ticket” option for parents who are attending with their child, which can make the event more affordable for families.

Booksellers should also utilize social media to promote their events. Shaffner noted that promoted Facebook posts prove to be most successful for featuring events at Brookline Booksmith. Appell added that booksellers should take advantage of the guest author’s social media platforms as well; Brookline Booksmith now requests that authors holding events at their store promote the event.

According to Savage, an important aspect of event planning is delegating tasks to staff members. When she scheduled an interview with Dave Pilkey 30 minutes before the event was supposed to begin, she missed an opportunity to debrief her staff, which led to a back-up in the ticketing area. Moving forward, she not only ensured that her staff knew the schedule for the night, but that she had enough staff members on hand to help as well.

Shaffner also stressed the importance of having enough staff members on hand. She shared with the audience that the first event she ever directed was Chris Colfer’s book tour for The Land of Stories, which included a pre-signing, a raffle, and a costume competition. The night became hectic as Shaffner and Colfer’s publicist realized they needed to hand out 210 raffle tickets to attendees participating in the costume competition.

For future events, Shaffner decided that staff would plan a checklist for all events with more than 150 attendees. Each staff member working the event is debriefed about who is assigned to what task, when breaks are allowed, when the guests will arrive, etc.

When the Red Balloon Bookshop hosted John Green on his tour for Turtles All the Way Down, the store had 20 volunteers help with the pre-signing portion of the night, which kept the event on schedule, said Whited.

The panelists also urged booksellers to remember that communication is critical when planning large-scale events. Appell shared that hosting John Green on his tour for Turtles All the Way Down was a particularly successful event, as his team clearly communicated their expectations with Parnassus Books.

Communication also played a key role in the successful execution of Children’s Book World’s event with Youtuber DanTDM. Hebert said that the event was unconventional when compared with what the store had experienced hosting in the past, but because of that, DanTDM’s team was extra communicative, which, in turn, allowed Hebert to communicate with attendees.

“We sent e-mails to every single person telling them exactly how [the event] was going to run, where they could eat, where they could park, how long it would be, when our back room would close, and when bathrooms wouldn’t be accessible. We put it all out there,” said Hebert.