While the store staff and the inventory won’t change in this new iteration, there will be different physical branding, including a new yellow color scheme. Johnson has been buying books for the store for a few years now, so the store’s personality is somewhat set in that regard, he said. At the same time, the store has also been tailoring its event schedule for Oakland, “so, in many respects, things will just be as they were, but it will be different because we’ll be answering as East Bay Booksellers,” said Johnson. The East Bay is a region of the San Francisco Bay Area, so the bookstore is named to reflect that love of place, said Johnson. 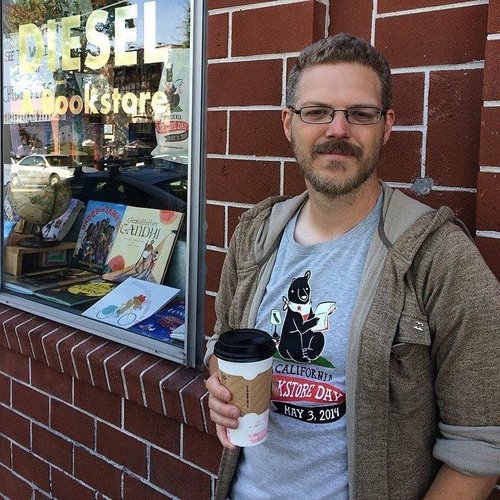 Husband-and-wife team John Evans and Alison Reid founded DIESEL more than 25 years ago, and Johnson started working at the 2,300-square-foot DIESEL Oakland store four years ago. Before that he had been an aspiring academic but had worked at bookstores and libraries during graduate school; he recently documented his transition to a career in bookselling in a piece for LitHub, “From the Seminary to the Bookstore.”

Last November, Evans and Reid, who own two other DIESEL locations, in Santa Monica and Larkspur, came to Johnson with the proposition that he buy and run the Oakland store on his own. Johnson said he had never considered owning a bookstore himself, and certainly not in the Bay Area, due to the high rents.

“I thought if I could raise the money to open, maybe it’s right; if I can’t, then DIESEL just keeps trucking along,” said Johnson. “And it worked! What we thought would be the most difficult or awkward part of this whole thing wasn’t: asking customers if they would like to support this transition that didn’t need to happen but was just something we wanted to do. And it didn’t take long to raise what I needed.”

The primary means Johnson used to raise money was the microloans model created by Greenlight Bookstore in Brooklyn, which several other bookstores have also used. The model involves securing small loans, most around $1,000 or so, from customers and people in the neighborhood. About 50 people offered loans; the bulk of the money came in during November and December 2016. Johnson was able to raise about $150,000 through loans and then an additional $9,165 through an Indiegogo campaign, which he launched after the loan period ended and people requested a way to donate money online.

“The loan part was so fun because it was in person. People would come in and I’d find out more about what they liked about the store, how long they had been shopping there,” said Johnson. “Some people had been customers since the doors opened, while some people were new to the area. They were just invested in local commerce, especially in a bookstore that they saw as more than any old shop, but as a place that actually trades in ideas and values.”

The transition to East Bay Booksellers has been made as seamless as possible for the six other booksellers on staff as well as for the clientele, said Johnson, and the store will soon be selling books online via its own branded IndieCommerce site. Going forward, Johnson is thinking about creating a sort of “library of resistance” shelf. Although they are not a political bookstore, said Johnson, DIESEL’s (and soon East Bay’s) displays tend to reflect their values and commitments, which lean to the left.

“I’m intrigued by the idea of having an evolving section of books that feed our sense of justice. Sometimes it may be as obvious as Rebecca Solnit’s Hope in the Darkness alongside other books about the [current political moment], but then there may also be books on mindfulness or children’s books that are against war or about empathy,” he said. “I don’t necessarily want it to be a hardcore ideological thing. I just like the idea of a pop-up section or shelf that from time to time is different when you come in.”

Johnson is also looking forward to the centralization of the store’s event coordination, aided by on-staff bookseller and events guru Aaron Bady, who Johnson said has a talent for creating out-of-the-box promotional strategies. Starting next year, East Bay Booksellers will begin running creatively themed event series, sitting down as a staff and picking a set of themes for each six-month events season.

“We want to attempt to create some narratives to our events, both what events we plan on having and what events we’ve had, which we will put into a year-end wrap-up of our event series,” Johnson said. Upcoming author events at East Bay Booksellers include appearances by Jesmyn Ward, Santiago Gamboa, and Daniel Handler.

Johnson said East Bay Booksellers’ relationship with DIESEL’s owners, who live locally, will continue as long as the store exists, with each store exchanging counsel, advice, and friendship with one another.

“There is this wonderful moment in bookselling right now, where you have these stalwart stores like DIESEL that have been guiding lights for a long time, figuring out ways of not just extending their own life, but also growing beyond themselves,” said Johnson. “The fact that I was able to raise this money and that others have been able to raise money for similar ventures really speaks to the general health of the industry. It makes me feel really optimistic.”