Holiday Shoppers Bring Their Dollars and Enthusiasm to Indie Bookstores

Bookselling This Week reached out to indie booksellers across the country in this first week of 2019, after a lively holiday shopping season spurred by top-selling local and regional titles, a crop of national bestsellers, and a higher recognition of the shop local movement.

Overall book sales across indie bookstores for 2018 increased nearly five percent over 2017, with a compound annual growth rate of 7.5 percent over the past five years. According to ABA’s IndieCommerce team, online holiday shopping from November 1 through December 31, 2018, saw a 21 percent increase in revenue versus the same period in 2017.

Sarah Hollenbeck, co-owner of Chicago’s Women & Children First, said her store had a great sales record in 2018, with a major highlight coming at the end of the year. 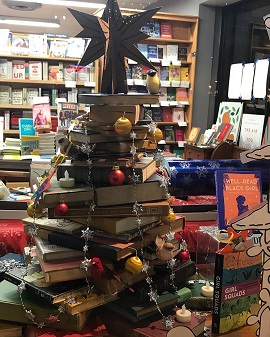 “In December, we had our single biggest sales day in the history of the store,” Hollenbeck wrote in a recent e-mail to customers. “Overall, sales were up 5 percent from last year’s holiday season and online orders were up 50 percent. We are so grateful to our community for making 2018 such a success.”

To cap off the end of the year, Books & Whatnot founder Beth Golay created a special “Year in Review” video highlighting photos from all of the store’s notable events and happenings. Women & Children First is already looking forward to next year, Hollenbeck said, when the store will celebrate its 40th anniversary with special promotions, a social media campaign honoring the store’s history, a storytelling event, a birthday party, and more.

Kathleen Millard, general manager at Elm Street Books in New Canaan, Connecticut, told BTW the store’s holiday sales were “up year over year and we basically sold all our overstock.”

“Some books were out of stock at publishers, which made for creative juggling by our talented booksellers to find other titles for holiday gift giving,” said Millard. “When we closed on Christmas Eve, all customers were happy and Elm Street Books had delivered a season filled with awesome books and great customer service.”

This year, {pages} a bookstore in Manhattan Beach, California, enjoyed a strong December with sales up more than 3 percent in the holiday season. Sales were up 20 percent for the whole year, making it the store’s strongest year yet.

“I can honestly say that this holiday season, {pages} had the best, most enthusiastic, well-read, and engaging group of booksellers on the floor that we have ever had,” said co-owner Linda McLoughlin Figel. “Additionally, as I’m sure did other ABA stores, {pages} benefitted from the increased enthusiasm and still growing trend of shopping small and local.”

McLoughlin Figel also shared some of the store’s standout sellers for the holiday season: Becoming by Michelle Obama (Crown), Leadership: In Turbulent Times by Doris Kearns Goodwin (Simon & Schuster), and Where the Crawdads Sing by Delia Owens (G.P. Putnam’s Sons), among others. 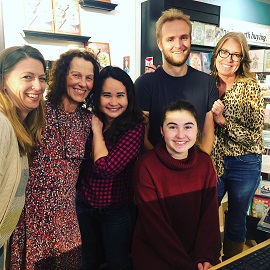 The staff of {pages} a bookstore.

Bel McNeill, owner of Bel and Bunna’s Books in Lafayette, California, told BTW that, happily, the store’s sales were up by 15.8 percent in December 2018 versus December 2017.

“We hadn’t expected it, but we were up over last year,” said McNeill. “I’m not exactly sure why, but I think there are a few reasons: We’re a kids’ bookshop, so, as usual, there were a few must-have titles. People more and more want to get their kids away from electronics, so I think giving books as gifts is a way of doing that. Plus, we’ve only been here three years, and I think more people know about us now and we’re getting more business as a result of that. It’s really a combination.”

McNeill said she was also proud that, as a store located close to a physical Amazon bookstore, they did well despite the challenges such a location could have posed.

“We’re five miles away from an Amazon brick-and-mortar store, and there are a number of independent bookshops in the area, so we’re all up against it,” said McNeill. “Last year it didn’t impact us, but we were worried this year. And it has been a very, very tough year, but I think people do want their indie bookshop, particularly in small towns like mine. It really is a bit of a community thing.”

According to McNeill, some of the store’s bestsellers included the new Dogman by Dav Pilkey (Scholastic), which was released Christmas Eve. McNeill took pre-orders and opened the shop at 7:00 a.m. on Christmas Eve so people could pick up their wrapped books for the holidays.

Tory Hall, general manager and head book buyer for Indigo Bridge Books & Café in Lincoln, Nebraska, said holiday sales were very strong. During the 2018 holiday season, which the store measured from Small Business Saturday through Christmas Eve, it saw a sales increase of 11 percent from the 2017 holidays.

“We had our second-best Small Business Saturday ever this year, and we also just celebrated our 10th birthday,” said Hall. “In general, we felt there was more buzz this year and more people in the store. The way we have always done Small Business Saturday is a 10 percent discount on everything the day of, and if anyone does a special order, we apply the discount as well. This year, for the first time, we were also offering a deal where every Saturday throughout the holidays, people could spend $50 and get a $5 gift certificate.”

The store’s bestselling books mostly came from store events with local authors, according to Hall, including an event with slam poet Andrea Gibbons the day after Small Business Saturday, which drew 100 people despite a huge snowstorm, and with Clayton Anderson, an astronaut. Some of the other top-selling titles were the newest Diary of a Wimpy Kid by Jeff Kinney (Amulet Books) and The Wonky Donkey by Craig Smith (Scholastic) for children, and for adults Girl Wash Your Face by Rachel Hollis (Thomas Nelson). 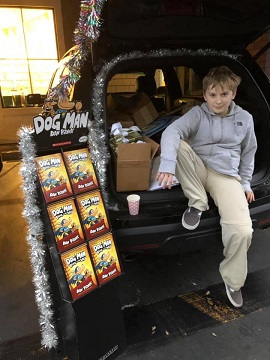 Ellen Mager, owner of Booktenders Secret Garden Children’s Bookstore & Gallery in Doylestown,  Pennsylvania, told BTW that because her store’s pipes burst in the beginning of the year, she was worried such a costly tragedy would be reflected in sales for the entire rest of the year.

“Because we had such a bad beginning of the year, I was really worried, but from September through December, we ended up almost the same as last year, even though the first two quarters started off badly. I was so thrilled,” she said.

Mager explained that one of the reasons Booktenders’ overall year turned out positive was, in part, due to the success of a myoblastoma fundraiser the store sponsored at the Mercer Museum in honor of two local sufferers. The event’s highlight was an appearance by children’s author and illustrator Paul O. Zelinsky, who gladly accepted Mager’s invitation. Mager said that while her goal was to donate $1,000 to the cause, they ended up raising $2,600.

“Everything evened out at the end of the year, and for that I was very grateful. It’s been one heck of year,” she said.

Mager also told BTW that she noticed more “showrooming” this year — customers taking pictures of books in-store to buy online later — but made sure to be vocal but polite if she saw a customer blatantly engaging in it. The idea of showrooming was brought to international attention via The Fountain Bookstore in Richmond, Virginia, after owner Kelly Justice tweeted about the number of shoppers who engaged in showrooming at the store. Justice’s tweet ended up going viral and inspired a story in The Guardian.

Will Peters of Annie Bloom’s Books in Portland, Oregon, was yet another store owner who told BTW that sales were up this holiday season.

“Our holiday sales were great,” said Peters. “We were up double digits percentage-wise for December. It was a good year for books in general.”

Karen Voigt, owner of The Second Story in Laramie, Wyoming, also told BTW that the store’s holiday sales were much better this year than they were last year.

“Our sales were up from last year,” said Voigt. “I don’t have all of the current numbers yet, but I can say that in December we were about 25 percent up from 2017, or close to that. So that is really good. A year and a half ago, Hastings, which was a big box store in the area, closed, so we had a great December 2017, but sales were even better this year. I think it just took a while for everyone to find us because now we’re the only bookstore left besides the local university bookstore.”

Eon Alden, events coordinator and general manager at City Lights Books in Sylva, North Carolina, said that not only was business booming at the store this past holiday season, but charitable giving was popular with customers as well. 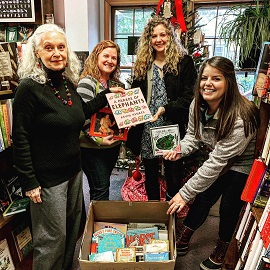 The Jackson County Health Department's CC4C team picked up a box of kids' books to donate at City Lights Books.

“We had a really good season. One of the highlights was that we did our 20th annual Giving Tree, where we partner with local agencies,” Alden said.

These agencies gave the store a list of kids in need, and customers came in for books related to the age and gender of the child and received a 20 percent discount on their purchase.

“We had a really great response from our community,” said Alden. “We actually finished up probably the quickest I can remember in terms of getting all the books selected for the kids, so that was a really positive thing.”

To encourage customers to shop, City Lights Books also participated in the Southern Independent Booksellers Alliance’s Holiday Catalog, which they promoted through social media, e-mail campaigns, and an insert in their local newspaper.

Check out last week’s issue of Bookselling This Week for a gallery of festive photos posted by indie bookstores on social media throughout the holidays.

— With reporting by Liz Button and Emily Behnke