On Tuesday, September 10, Margaret Atwood’s new novel The Testaments (Nan A. Talese/Doubleday), the long-awaited sequel to The Handmaid's Tale, was offiically released, and despite a rocky start, with Amazon violating Penguin Random House's strict embargo, indie booksellers and readers rejoiced. 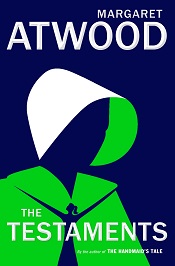 Despite heavy security around the title's release, on Tuesday, September 3, several consumers posted on social media that they had received their pre-ordered copies from Amazon in advance of the official on-sale date. Independent booksellers responded to the news on Twitter and in the media, including Publishers Weekly, the New York Times, and Gizmodo, expressing their anger that the company's transgression could potentially cut into indie sales, and wariness as to whether the retailer would actually face any consequences from the publisher. Many were further incensed by what they saw as a tepid response from PRH and an obfuscating one from Amazon.

Among the booksellers who voiced their dismay in the incident's aftermath were Lexi Beach, owner of Astoria Bookshop in Queens, New York, who posted an expansive thread on Twitter; Josh Cook, co-owner of Porter Square Books in Cambridge, Massachusetts, who penned a critique for LitHub; and The Raven Book Store in Lawrence, Kansas, which posted a Twitter thread illuminating the incident's potential to impact indies' bottom lines.

Shortly after the news broke, the American Booksellers Association released a statement in response, stating that the association had been in communication with the novel’s publisher, PRH, "to express our strong disappointment regarding this flagrant violation of the agreed protocol in releasing this book to the public." In addition, the statement continued, "in recent weeks ABA has communicated with appropriate officials at the U.S. Department of Justice and the Federal Trade Commission about the negative impact of Amazon’s market dominance in the book industry and U.S. retail overall. Amazon’s latest actions only further underscore how important it is that the appropriate federal agencies thoroughly investigate Amazon’s destructive business practices."

Despite the early furor, when the official publication day finally rolled around on Tuesday, September 10, indie booksellers did not allow their anger to dampen the occasion. Booksellers around the country spent the day blasting social media with posts that expressed their enthusiasm for the book, which has already been shortlisted for the Booker Prize and is in the works as a Hulu TV series. On Twitter, Facebook, and Instagram, booksellers did what they do best: entice customers to pick up a copy at their stores. Many of the stores that had waged spirited pre-order campaigns for the book also reminded customers to come in and retrieve their copies.

Below are some examples of indie booksellers' internet joy on the official The Testaments release day: 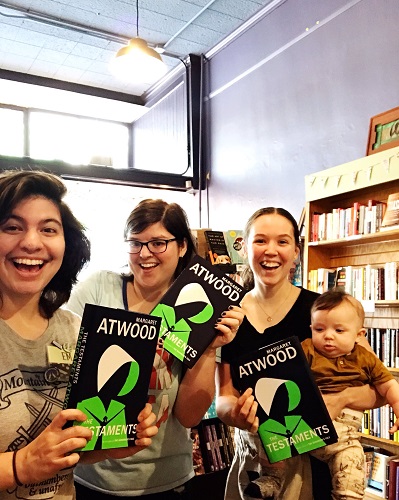 Curious Iguana in Frederick, Maryland, posted on Twitter: "Readers, are you ready?! THE TESTAMENTS By Margaret Atwood is now available! Swing by your favorite indie bookstore to snag a copy!" 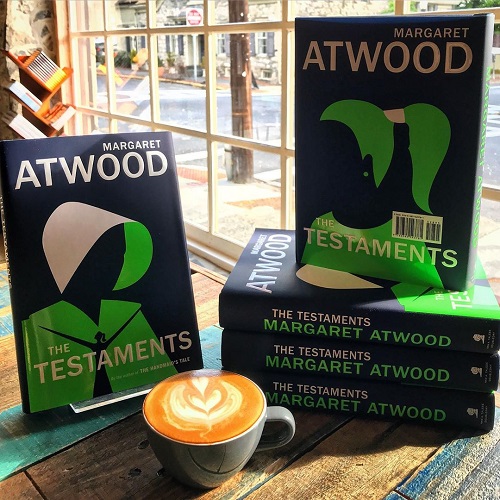 Rough Draft Bar and Books in Kingston, New York, posted on Instagram: "Today’s the day!! The highly anticipated sequel to The Handmaid’s Tale is HERE! Pick up a copy of The Testaments at your local independent bookstore, settle in with some coffee & get reading. We’ll race you to the end." 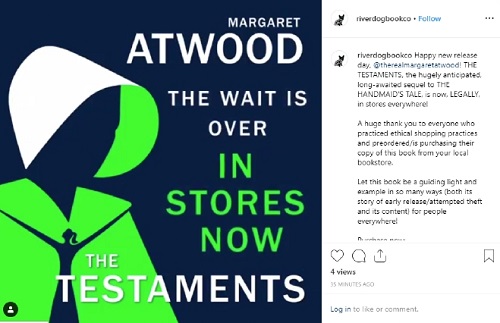 River Dog Book Co. in Beaver Dam, Wisconsin, posted on Instagram: "Happy new release day, @therealmargaretatwood! THE TESTAMENTS, the hugely anticipated, long-awaited sequel to THE HANDMAID’S TALE, is now, LEGALLY, in stores everywhere! A huge thank you to everyone who practiced ethical shopping practices and preordered/is purchasing their copy of this book from your local bookstore. Let this book be a guiding light and example in so many ways (both its story of early release/attempted theft and its content) for people everywhere! Purchase now: https://shop.riverdogbookco.com/book/9780385543781" 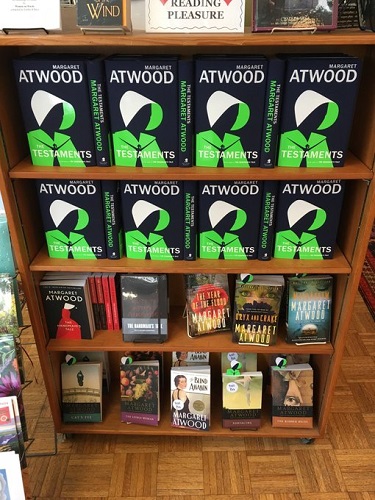 Malaprop's Bookstore/Cafe in Asheville, North Carolina, posted on Twitter: "@MargaretAtwood 's The Testaments is out TODAY! (we have lots of copies!)" 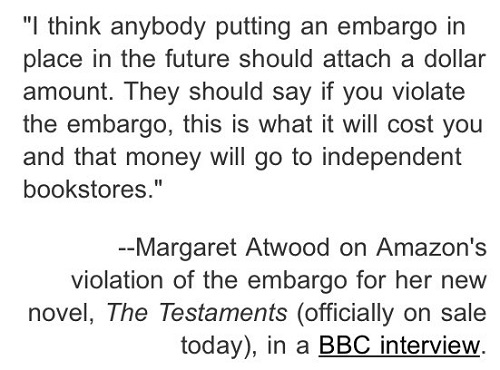 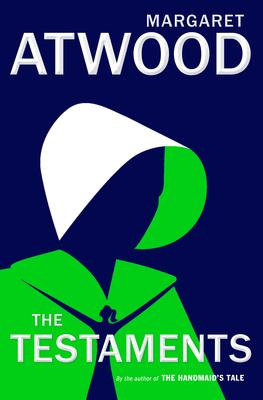 Gathering Volumes in Perrysburg, Ohio, posted on Facebook: "Tuesday is Book Release Day! Margaret Atwood's dystopian masterpiece, The Handmaid's Tale, has become a modern classic—and now she brings the iconic story to a dramatic conclusion in this riveting sequel. Shortlisted for the Booker Prize. Stop by Gathering Volumes for your copy of "The Testaments" today, or check it out online here." 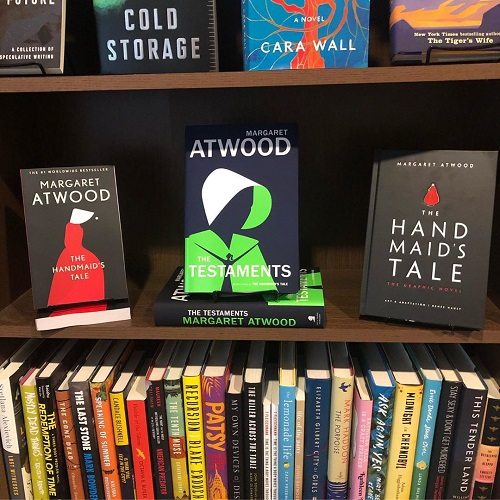 A Novel Idea on Passyunk in Philadelphia, Pennsylvania, posted on Instagram: "It’s finally here! Come by the shop today to grab your copy of The Testaments, the long anticipated sequel to The Handmaid’s Tale." 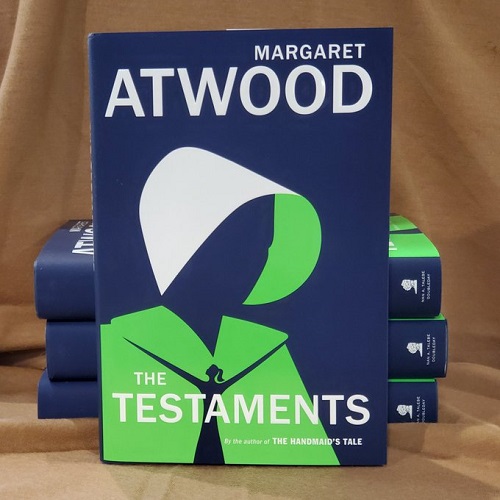 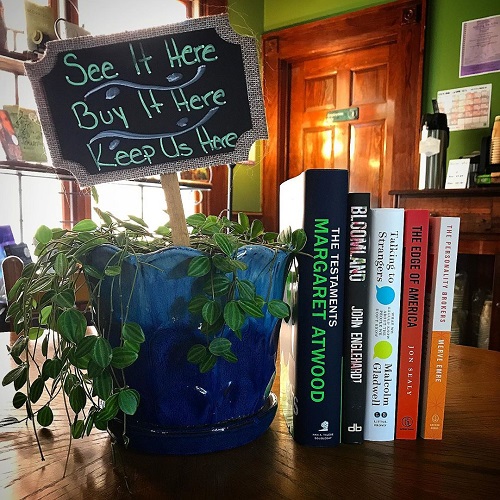 Foggy Pine Books in Boone, North Carolina, posted on Twitter: "It’s new book day! There was too much out for me to include everything in one picture so we’ll be featuring this week’s new releases for the rest of the week! The most exciting release is THE TESTAMENTS, a sequel to THE HANDMAID’S TALE. Drop by & grab your copy today!" 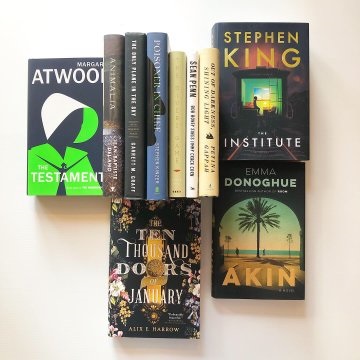