February is Black History Month in the United States, and to celebrate, independent bookstores across the country are hosting authors, creating displays, and sharing reading recommendations on social media.

Black History Month started as “Negro History Week” in 1926 due to the efforts of African American historian Carter Godwin Woodson. It was celebrated during the second week of February to coincide with the birthdays of Abraham Lincoln and Frederick Douglass. In 1969, the idea for extending the event for the whole month was raised, and, in 1976, President Gerald Ford recognized Black History Month for the nation’s bicentennial. 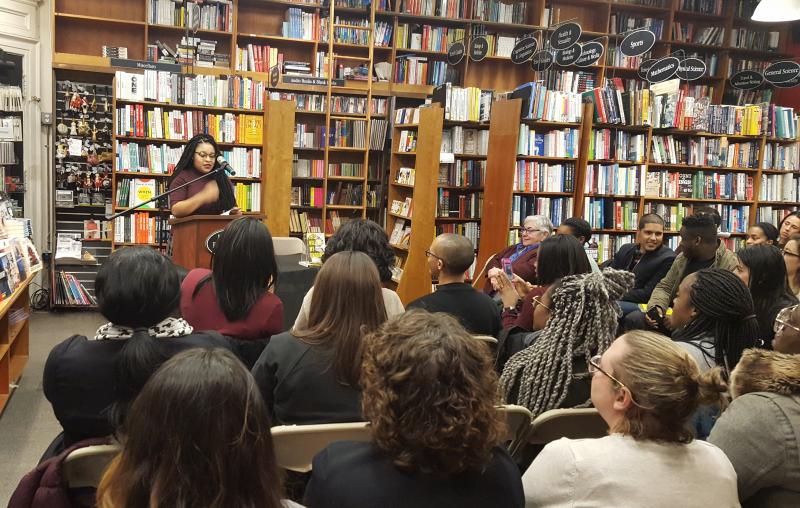 “We’re always, in our displays and our event series, trying to have as diverse a range of voices as we can and have displays that speak to the current moment,” she said. “In this particular month, it is really important to highlight to our customers that there is a huge range of thought in this area and a huge range of history. These are often voices that don’t get as much attention in the public media.”

The series of events at Harvard Book Store kicked off February 1 with an appearance by Morgan Jerkins, whose debut essay collection, This Will Be My Undoing: Living at the Intersection of Black, Female, and Feminist in (White) America, was published January 30 by Harper Perennial. 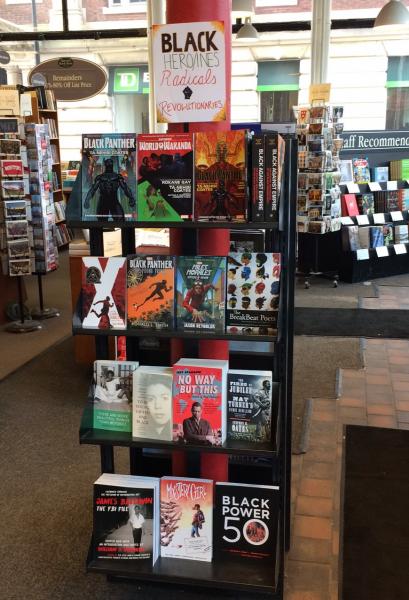 A display at Harvard Book Store celebrates black history.
A wide array of events is on tap for the month, including a visit on February 12 from Tayari Jones, whose An American Marriage: A Novel (Algonquin Books) was just picked by Oprah Winfrey for her book club. “I’m reading it and really loving it. She’s wonderful,” Cass said.

A bookseller for 12 years and a buyer for four and a half, Cass said it’s becoming easier to find books that reflect diverse voices, including those of African Americans, people who identify as LGBTQ, and those exploring disabilities, but the work is not over.

“We certainly see a lot of room for improvement,” Cass said. “We often see books that look like good books on a diverse topic, but they are still written by white writers or they are edited by white editors.”

Small and large publishers are realizing there is a demand from customers for diverse titles, Cass said.

“When we do displays for Black History Month or Women’s History Month — and we have a disability studies display going up very soon — those do tend to sell books because our customers are interested in perspectives they are not as familiar with,” she said. “We also have lots of customers who are in those communities, and being able to show them back to themselves and show them similar voices is important, too.”

“I think it’s important to balance things and make Black History Month not just about slavery every year,” she said. “It is about that, but it’s a much more rich and diverse history than slavery and the Underground Railroad.”

Word Bookstores in Brooklyn, New York, and Jersey City, New Jersey, not only has displays in windows and endcaps at both stores but is trying something new with its Instagram this year, said Communications Director Hannah Oliver Depp. “Our Instagram account is focusing on a different black author or subject each day this month, and we’re doing a Libro.fm playlist for Black History Month, as well as a special staff pick newsletter next week featuring entirely authors of color,” Depp said. 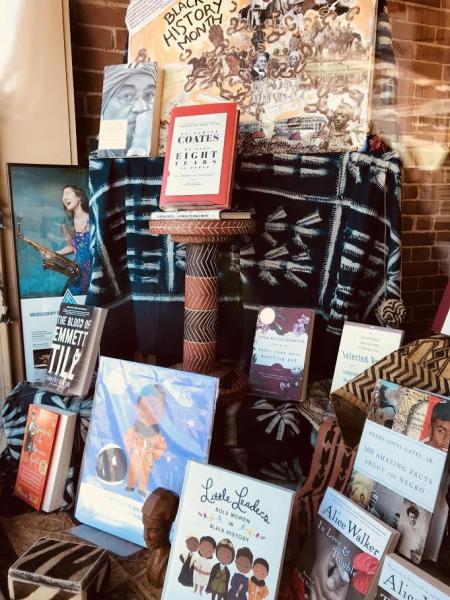 The window of the Vermont Book Shop highlights black history.
The Vermont Book Shop in Middlebury, Vermont, has once again tapped the expertise of local artist Sarah Pope to create a window display celebrating the event. “This year, we decided to focus on contemporary significant black authors for the window, and represent women a bit disproportionately,” said Jenny Lyons, sales and marketing manager.

The window also features new children’s titles such as Before She was Harriet by Lesa Cline-Ransome and illustrated by James E. Ransome (Holiday House) and Little Leaders: Bold Women in Black History by Vashti Harrison (Little, Brown Books for Young Readers).

This month marks a time when many booksellers are reflecting on their roles as educators and thought leaders for their communities as the issue of diverse representation in publishing is a growing topic of interest.

Danny Caine, owner of The Raven Book Store in Lawrence, Kansas, said that while he’s scheduled a variety of special events to mark Black History Month, he believes it’s his role as a bookseller to celebrate diversity every day of the year. 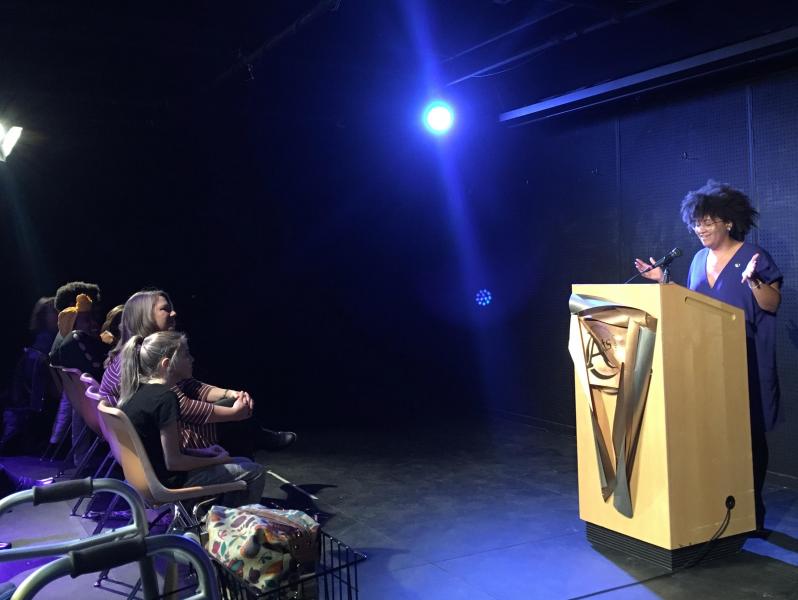 Poet Rachel Atakpa speaks at an event hosted by The Raven Book Store.
“It becomes a little more focused on black authors in February,” Caine said. “With a small indie, the selection is just naturally curated. To curate what goes on the shelves in a thoughtful way that emphasizes diversity is a part of my job.”

On February 1, the bookstore hosted its annual Langston Hughes Creative Writing Awards, presented in partnership with the Lawrence Arts Center. One of the winners was poet Rachel Atakpa, who has been appearing at the Raven’s Mic Supremacy open mic series. Caine started the series when he took over the Raven six months ago as part of his effort to become a resource for the community. “I think about it all the time as a bookstore owner,” he said. “How can I better reflect the makeup of my customers with the people in front of my microphone?”

On February 27, Hanif Abdurraqib is coming to read from his book of essays They Can't Kill Us Until They Kill Us (Two Dollar Radio). More than 130 tickets have already been reserved.

“I’m always trying to order diverse titles and feature diverse titles,” Caine said. “When someone like Hanif Abdurraqib is coming, it’s easy to sell that book and get people excited.” 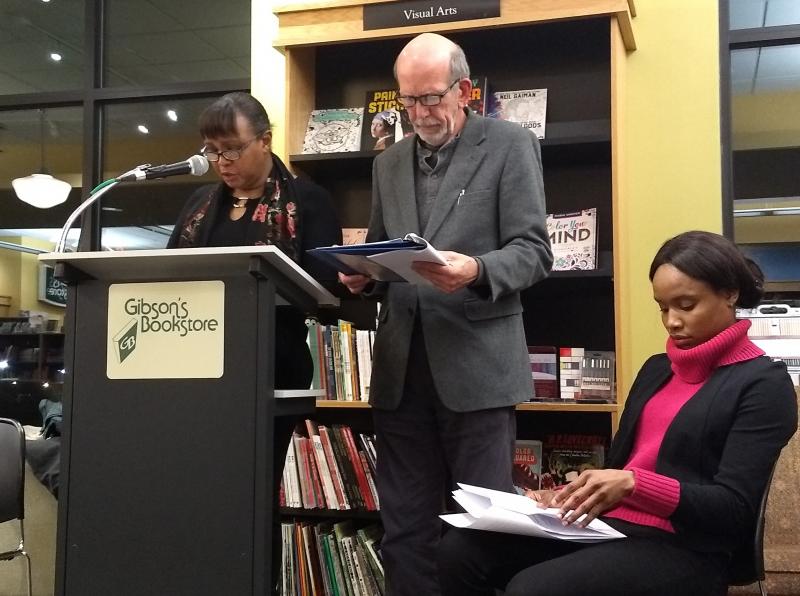 Elisabeth Jewell, events coordinator for Gibson’s Bookstore in Concord, New Hampshire, said that while her state’s residents are about 93 percent white, it’s her role as a bookseller to welcome diverse voices. For instance, on February 1, Gibson’s hosted author Masheri Chappelle to talk about her historical fiction novel, The Oracle Files: Escape (Black Rose Writing).

“It’s easy to accidentally become culturally isolated here, easy for the population to forget that they are not the default in the world,” Jewell said. “As stewards of books, it is our duty to present titles which share more experiences and viewpoints, to present stories and books in which our non-white populations might see their own faces or experiences reflected back, or which remind our residents that we are a small sliver of the world population at large.” 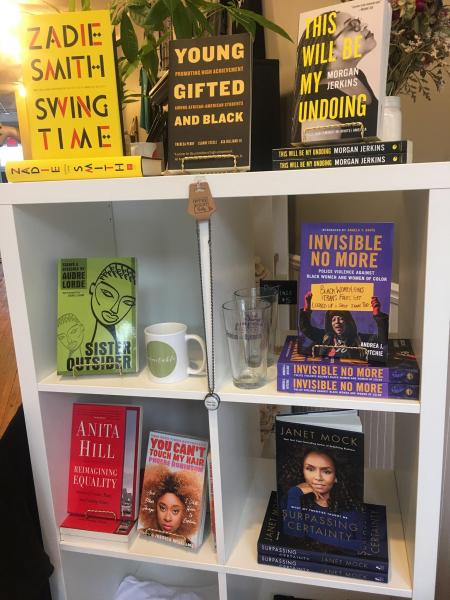 A display at Card Carrying celebrates black writers.
Sarah Blagg, co-owner of Card Carrying Books & Gifts, a feminist bookstore in Corning, New York, has a rotating indoor display of titles by black authors and is featuring authors of color three days a week on Instagram to celebrate Black History Month.

“To me, the importance of focusing on the experiences of black Americans is more vital now than ever,” Blagg said. “I see a lack of empathy toward those who are considered ‘other’ in our society when the reality is every single story is important. And the stories of those who have historically been — and, sadly, still are — silenced by the patriarchy are even more important to highlight. It’s my responsibility as a privileged white woman to lift the voices of people who face systemic racism.”