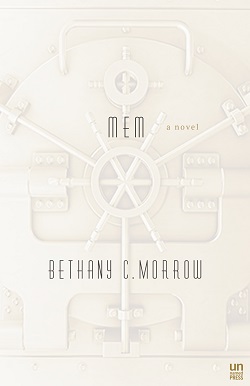 Bethany C. Morrow is the author of MEM: A Novel (Unnamed Press), an Indies Introduce Winter/Spring 2018 debut selection and a June 2018 Indie Next List pick.

MEM, which set in an alternate Montreal of the 1920s, explores the possible consequences of humans finding a way to extract unwanted memories and implant them in another being that looks and sounds just like the original. Dolores Extract 1 (Elsie) is just such a being. However, instead of simply reliving her origin’s extracted memory over and over, Elsie becomes sentient and continues forward with life, creating her own memories.

Morrow was born and raised in California. She holds a bachelor’s degree in sociology from the University of California, Santa Cruz, and studied psychological research at the University of Wales, Bangor, in Great Britain. She currently resides in upstate New York.

Justin Souther, a buyer at Malaprop’s Bookstore/Café in Asheville, North Carolina, was a member of the Indies Introduce bookseller panel that selected Morrow’s debut for the program. Here, he and Morrow discuss the themes of identity and memory that are central to the book.

Justin Souther: This is sort of the classic, worn-out question everyone asks authors, but where did the idea at the foundation of the story come from?

Bethany C. Morrow: I had the opportunity to talk about this a bit at Winter Institute, actually. I was literally laying in bed, thinking about the difference between science and science fiction, in particular how “cloning” in the real world was so much less remarkable — at least in terms of who the clone is. I thought about the way they don’t clone memories or experiences or personalities, and then, of course, how remarkable it might be if cloning were expressly for the purpose of sharing memories. Or removing them.

JS: What I find interesting about the book is that it’s a futuristic concept, but it’s set in an alternate history. What drew you to combine these two disparate notions?

BM: They don’t feel like disparate notions, I suppose. I think this memory extraction only seems futuristic because it hasn’t been done as yet. The desire, I think, is timeless. The inclination. If we could’ve, we would’ve, and so I think it fits just as well in any time period where humans reside.

JS: The nucleus of your novel is built around ideas of identity and memory. Are these thoughts you’re often drawn to, or did MEM’s concept tease that out?

BM: I’m sure they’re always at the core of my work because they’re at the core of life. Some have the supposed privilege of identity going unspoken but overrepresented, but I am writing of people for whom that isn’t true, nor do I desire for it to be. Memory, I think, is in some ways the great equalizer, in that all of us have to bear it, process it, choose whether to compartmentalize or integrate it. After MEM, or more accurately, all the discussion surrounding MEM, I think I’m more aware of these themes in other of my work that’s perhaps less overt.

JS: I’ve seen reviews of MEM that draw comparisons to the film Eternal Sunshine of the Spotless Mind and the novel Never Let Me Go. Were there specific works that you felt influenced MEM?

BM: When writing MEM I was writing Elsie’s story, following her desire or trauma, without knowing what would come next but having some idea where she might end up. At the time, what consciously influenced and inspired me was Montreal and my historical research about it. Interestingly, and relevant because, of course, my imagination doesn’t exist in a vacuum, Eternal Sunshine is one of my favorite films; I absolutely adore it. It’s funny that my brain didn’t outright think of it while I was writing this novel, but I love the comparison, because the film meant and means a lot to me. I first became aware of Never Let Me Go after writing MEM, and then watched the film, which was incredibly intriguing. The same is true of Westworld, which is another common comparison — I can’t help but think because of the name Dolores, which, to be fair, I was warned about before publishing.

JS: I’m personally a big fan of small, independent presses and the work they’re able to publish. How did you find Unnamed Press? Was there anything specific that drew you to them?

BM: I was looking specifically for a literary press for MEM from the beginning, with the exception of sending it to one traditional genre publisher that expectedly wanted MEM to lean further into its speculative concept and have the plot take that route. It wasn’t the story I was trying to tell, so I focused on finding an independent press that would connect with the story I’d actually written. Unnamed was among about a half dozen presses I submitted to in that round, and immediately I was very, very impressed — at their age, at the number of books they’d published, at their distributor and that they had one, at the reviews and where the books were being reviewed and talked about, at the covers! I read the openings of several of their novels and fell in love with The Sadness by Benjamin Rybeck, and ordered it to see what their books were like in my hands. It exceeded my expectations. Of course, the story and the prose were lovely, and then the book itself, the production, was beautiful. They jumped to the top of my wish list, so I became nervous about whether they’d connect with my weird book. Happily, they did, and they are the absolute perfect home for MEM.

Find out more about the author at bethanycmorrow.com.