Kepler’s Books in Menlo Park, California, has been selected by Facebook to join its 2017 U.S. Small Business Council; the bookstore was chosen from a pool of five million businesses that currently advertise using the social media platform. 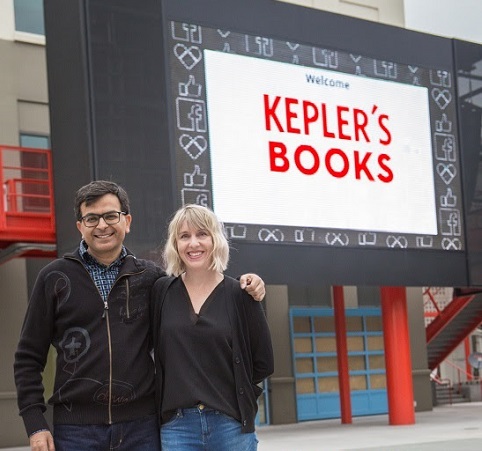 Over the last five years, since launching the Kepler’s 2020 initiative to build the bookstore of the future, Kepler’s has reorganized itself and is now comprised of the bookstore Kepler’s Books; the non-profit Kepler’s Literary Foundation; and GiftLit, an online subscription-based book gifting service.

Kepler’s was one of just 11 businesses from across the U.S. invited to join the council. Praveen Madan is the CEO of Kepler’s and a founding board member of the non-profit Kepler’s Literary Foundation. His business partner and wife, Christin Evans, is the lead partner managing The Booksmith in San Francisco and Berkeley Arts & Letters in Berkeley, California.

Madan and Nicole Hughes, director of special projects for the Kepler’s Literary Foundation, recently had the opportunity to spend two days at Facebook’s Menlo Park headquarters in Silicon Valley. There, they met with Facebook’s product and marketing leaders to learn more about how Kepler’s, as a small business, can better use Facebook to serve the area’s reading community. Madan said that the two-day excursion consisted of back-to-back meetings, presentations, discussions, and workshops with Facebook managers about the company’s various products, including the photo-sharing platform Instagram (which Facebook bought in 2012) and Facebook Messenger.

According to Madan, Facebook goes through a rigorous selection process to choose the 11 businesses on the council, including candidate interviews and a host of other requirements.

“I think it’s because they are institutionalizing this Small Business Council program to a greater and greater degree every year,” Madan said of the program, which launched in 2014. “There is a lot of innovation going on in bookselling, with a lot of people trying a lot of different things. We just think this is one thing to which we are particularly well-suited, given where we are and who we are.”

According to Facebook’s Small Business Council webpage, the chosen businesses should have a record of “us[ing] Facebook and/or Instagram as their primary form(s) of marketing,” which has resulted in its growth in terms of sales, specific campaign wins, hiring, and/or business expansion.

At the moment, Kepler’s uses Facebook in a variety of ways. Madan noted that Kepler’s promotes GiftLit book collections through Facebook posts and Facebook ads; in fact, one of the company’s most popular book collections is the Lean In collection curated by Facebook COO Sheryl Sandberg, who said in a statement about Kepler’s: “Small businesses, like Kepler’s, are the backbone of our economy and the heart of our communities, so when they succeed, everyone wins.”

According to Madan, Kepler’s has long had a mutually beneficial relationship with Facebook; now, being part of the Small Business Council gives Kepler’s even greater access to Facebook’s executives, knowledge, and best practices.

“For us, Facebook is becoming a very, very important strategic partner across a number of areas of our business,” said Madan. “From Facebook’s standpoint, they’re interested in democratizing access to the tools and technology small businesses need to build online communities. I think Facebook is just trying to put themselves in small businesses’ shoes and learn more about small business concerns and issues and how they can better serve that marketplace, because a very, very large number of users and advertisers on the platform are small businesses.”

Madan thinks that Facebook chose Kepler’s in part because they were aware of the Kepler’s 2020 project, which launched in 2012 to transition the company from a for-profit bookstore to a hybrid consisting of both a community-owned bookstore and a literary nonprofit. The Kepler’s 2020 program was conceived and launched by a group of community champions in Silicon Valley to “build the bookstore of the future” at a time when prospects for independent booksellers looked bleak in the face of the bankruptcy of Borders, rising sales of e-books, the growing dominance of Amazon, and Kepler’s own historic struggles to find a sustainable business model.

One of the original principles of Kepler’s 2020’s mission, said Madan, was finding ways to better leverage technology, which means having a strong virtual presence and making sure that technology is fully integrated in the store so books can be sold through multiple channels and platforms.

“At most technology companies, a lot of the product development ends up being led by engineers who are fast and furious at work building all of these robust products packed with new features and functions,” said Madan, “But with this program, we’re working with marketing people who are trying to better understand what our marketing needs are as a small business; they then translate them back to the [product engineers] so that they know who they are building it for and how it will be used.”

The two days of meetings earlier this spring were just the start of the bookstore’s new relationship with Facebook. “Our understanding is that there are going to be more immersive engagements like this one, and we are already seeing results from our enhanced access to Facebook product and marketing groups,” said Madan.