Kim Scott, author of Radical Candor: Be a Kickass Boss Without Losing Your Humanity (St. Martin’s Press, March 2017) will deliver the final keynote of Winter Institute 12, on Monday morning, January 30.

Scott, who spoke with Bookselling This Week in anticipation of her talk, said that while a bad boss can make employees miserable, stifle growth, and create instability, a great one can be a boon for individuals and companies in many ways. Importantly though, she said, being a good boss requires fostering relationships with your employees, especially those who report to you directly.

“The theme throughout the book is that in order to be a great boss, you have to have a very personal relationship with the people who work for you,” said Scott. “But it’s a very specific and different type of relationship, and it’s also a completely new one in terms of human history. This institution of the boss/employee relationship only really came about since the Industrial Revolution.”

Scott said her book includes instructive stories and anecdotes about her own successes and mistakes and those of others’ in order to illustrate the dos and don’ts of good management.

Before writing Radical Candor, Scott served as a CEO coach at Dropbox, Qualtrics, Twitter, and several other Silicon Valley companies. Prior to that, she worked as a member of the faculty at Apple University, where she developed the management course “Managing at Apple.” Earlier in her career, Scott led AdSense, YouTube, and Doubleclick online sales and operations at Google and served as co-founder and CEO of Juice Software, a collaboration start-up. Scott received her Master of Business Administration from Harvard Business School and her Bachelor of Arts degree from Princeton University. 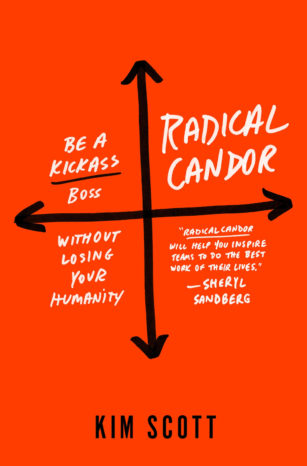 “When I was teaching the class at Apple, I felt the thing that really made the class come alive was when somebody would ask a question and I’d tell a story from my own experience,” she explained. “Storytelling is the best way to teach management. I really wanted this book to read more like a book of short stories.”

Since there is very little management training at most companies, Scott said she decided to use some of her and others’ experiences under bad bosses to show how she learned to be a better one, and how others can do the same.

“I always felt throughout my career as a manager that there is so much unhappiness in the world because of bad bosses, and the problem I think is largely because when most people become a boss, no one teaches them what the job is,” said Scott.

The first step, she said, is relationship-building.

“In order to build a good relationship with an employee, you have to care about them personally, and at the same time, you need to challenge them directly,” Scott said. This, combined with a management style that involves praise for employees that is sincere and criticism that is delivered kindly, is precisely what Scott means by employer-employee relationships based on “Radical Candor.”

“By far, the most common mistake I see is Ruinous Empathy,” said Scott. “You want to be nice to somebody — you don’t want to hurt them — so you don’t help them when they screw up. But if you had been telling them all along that they had been screwing up [they may have improved].”

“It’s hard to criticize other people’s work,” Scott acknowledged. “It’s hard to find the energy to be specific and sincere; praise can often feel very patronizing and criticizing can feel mean, but in order to give employees good guidance, you have to try to praise and criticize on a regular basis.” 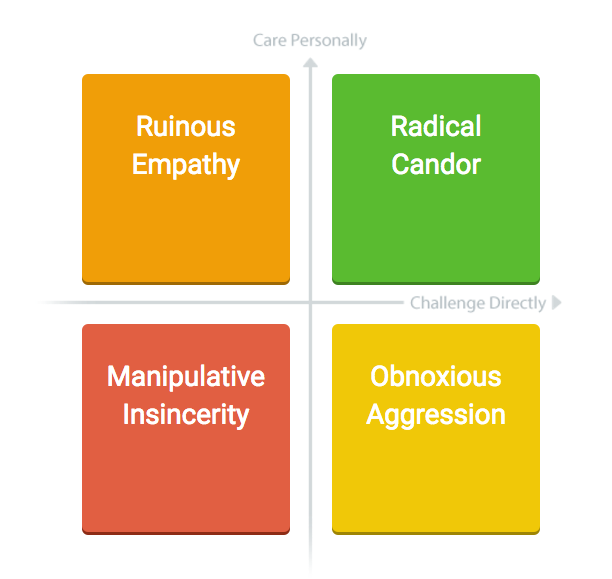 This practice of giving praise and criticism, when it is done immediately, humbly, specifically, and in-person, is the first of three key steps in becoming a good boss or manager, Scott said. The second is soliciting feedback from employees about one’s own performance. When doing so, Scott advises that bosses first ask, “Is there anything I could do or stop doing to make it easier to work with me?” If an employee gives an answer the boss doesn’t agree with, Scott advises embracing that feeling of discomfort and not getting defensive, while listening in an attempt to understand.

Third, Scott said, bosses must have occasional career conversations with their employees. “You can give people work that will have more meaning to them if you understand what motivates them and what they want to accomplish in life,” said Scott. This will both help that employee grow and be better at their job, while making their work more personally rewarding.

Scott and Russ Laraway, a former Google colleague, recently launched Candor, Inc., a management solutions company providing online tools and software to make it easier for employers to follow the advice offered in her book. The company is working on an online tool to help facilitate more productive career conversations. According to Scott, these conversations are the best opportunity for a boss to start soliciting feedback from an employee; a feedback gauge is already available on the Candor website. Scott said she and Laraway are also working on building a digital management coach tool to help employers handle difficult management challenges.

Overall, Scott said she hopes that her book, and the philosophy of Radical Candor, will “help people have better relationships at work and do the best work of their lives.”

Scott will deliver her breakfast keynote on Monday, January 30, from 7:45 a.m. to 8:45 a.m. in the Hyatt Regency Minneapolis’ Nicollet Grand Ballroom.