Kim Scott Doles Out Some “Radical Candor” at Winter Institute 12 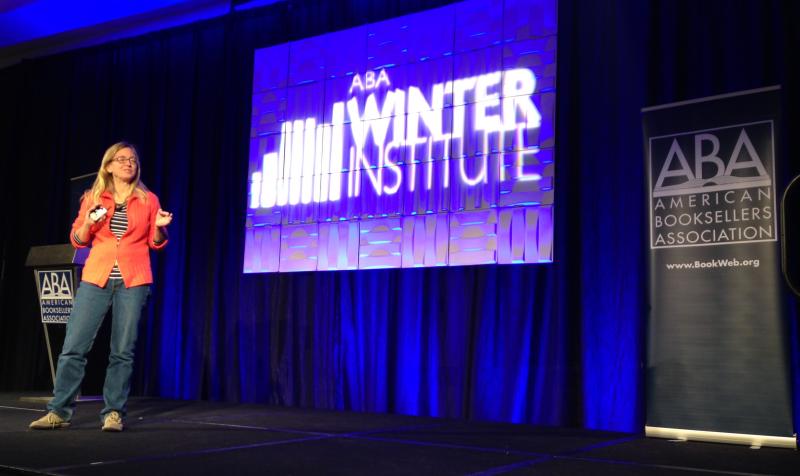 Scott’s new book, Radical Candor: Be a Kickass Boss Without Losing Your Humanity (St. Martin’s Press, March 2017), illustrates the dos and don’ts of being a boss through stories and anecdotes that arose from her own experiences as a manager, an employer, and an employee.

“If you can put [radical candor] into practice,” Scott said, “it will help you do the best work of your lives, but, more importantly, create the best relationships of your career.”

Scott began developing the curriculum in her book while working as a member of the faculty at Apple University. Before that, she served as a CEO coach at Dropbox, Qualtrics, and Twitter. Earlier in her career, she led AdSense, YouTube, and Doubleclick online sales and operations at Google.

Scott started her talk with an anecdote about working for Lean In author Sheryl Sandberg at Google. After giving a presentation that she thought went quite well, Scott said, Sandberg pulled her aside and told her bluntly, “When you say ‘um’ every third word, it makes you sound insecure and stupid.”

While some might argue this was a mean thing to say, Scott said at the time she felt like “I had gone through my whole career like I had my fly down,” and no one had told her.

As she wondered what made Sandberg so able and willing to give her such honest advice, Scott realized that being a good boss requires fostering strong relationships with your employees that involve both caring and challenging. She went on to develop the philosophy of “Radical Candor,” which she said means caring about an employee personally, and at the same time, challenging them directly, combined with a management style that involves sincere praise and tactfully delivered criticism.

To illustrate this concept in her book, Scott created a two-by-two diagram with “caring personally” and “challenging directly” on each axis: the other three quadrants, along with radical candor, are obnoxious aggression, ruinous empathy, and manipulative insincerity.

“They are not personality types,” Scott stressed. “We all spend time in all of these quadrants.” The biggest problem she said she sees is ruinous empathy, an approach that led her, early in her career as the founder and CEO of a software start-up, to retain an incompetent but likeable employee for much too long, until she was eventually forced to fire him. To her shame, she said, the action appeared to her employee to come from out of the blue.

“When it comes to being a professional, an awful lot of people think that means leave everything at home and come to work like some kind of robot, and I think that’s a terrible mistake,” she said. “We have to be more than professional. You’ve got to bring your whole self to work because when you are just professional you are on a slippery slope….We have a tendency to divide people into friend or foe and when we start out thinking about people as just professionals, then they slip in to the foe category too often.”

But people who manage other people also need another dimension, she said: bosses must be willing to piss people off, but many people’s reluctance to do this starts very young, when, as children, they are told not to say anything if they can’t say something nice. Scott said that when you become a boss, however, “now it’s your job to do it and that is hard, but that is what you need to do to be successful.”

“I would argue that it’s not just your job, it’s your moral obligation to challenge the people around you,” she added. “If you manage somebody, they are growing, they are learning. You’re in a position of authority and when you see them screwing up, it is your job to tell them they are screwing up.”

At the conclusion of her talk, Scott said she hopes that booksellers can use this axis of radical candor as well as the other tips in her book to create an environment in their store where they and their employees love and enjoy their work.