Earlier this month, Jan’s Paperbacks in Aloha, Oregon, hosted an event that owner Debbie Burke said amounted to her highest grossing day ever.

Kobo Writing Life, Kobo’s do-it-yourself eBook publishing platform, sponsored the November 2 event that brought together independent booksellers and local authors. Seventy people participated in an afternoon educational workshop on Kobo and Kobo Writing Life’s self-publishing portal and even more participated in an evening reception to celebrate the relationship between authors and independent bookstores.

“The response was just amazing. It was beyond what we all could have planned for,” said Burke.

Mark Lefebvre, director of self-publishing and author relations for Kobo, and Christine Munroe, Kobo Writing Life’s U.S. manager, worked with author Maggie Jaimeson to develop the event for Jan’s Paperbacks. Now, they are looking to coordinate more events that team independent bookstores and local authors (both self- and traditionally published) with Kobo. 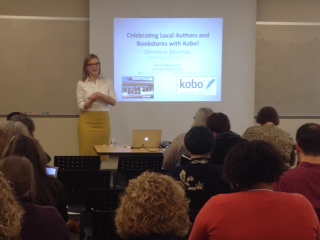 “Our goal with Kobo Writing Life is to do these kinds of things and drive people into the store. I know the importance of getting foot traffic,” said Lefebvre. “The more people that we can get to set foot in the store, the more likely it is that those consumers are going to find something they love because, sometimes, all it takes is getting inside and seeing what the indie bookseller is up to in order to recognize the tremendous value a local bookstore brings to that community.”

“The response from authors was huge,” said Burke. The workshop, which was open only to booksellers and authors, brought in a surprising number of attendees, nearly all authors. “Some published and some just hoping, but everyone wanted to learn,” said Burke. 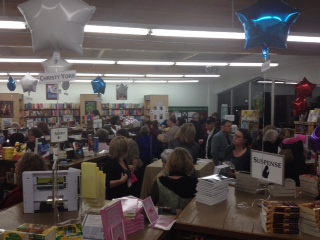 Munroe, Burke, and Jaimeson spoke at the workshop, giving different perspectives — from Kobo, a bookseller, and an author — on self-publishing, eBooks, and the bookstore-author relationship.

Following the workshop, 18 Pacific Northwest authors attended a three-hour reception at the bookstore, where they met with more than 75 workshop participants and customers and gave away coupons for free eBook downloads through Jan’s Paperbacks, via Kobo.

Food and drinks were provided by Kobo, as well as a Kobo device for a raffle and promotional cards for free eBooks. The store also offered giveaway baskets featuring signed books from a variety of authors.

Burke said that the register continued to ring up purchases throughout the night.

“It was amazing to have the authors in the bookstore space, meeting fans face-to-face,” said Munroe. 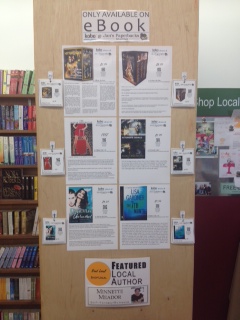 The event was deemed a resounding success by Jan’s Paperbacks and by Kobo. In the days following the event, nine of the 18 reception authors saw their titles rise into the top 50 bestselling Kobo eBooks, and Jan’s saw a huge leap in sales during the event.

Lefebvre credits Jan’s Paperbacks for making the event so successful. Having already embraced the world of digital reading and author relationships with a curated display of digital-only titles and endcaps featuring plentiful local authors, “Jan’s demonstrates that all it really takes is the right combination of the right store owner or manager willing to work with local authors, whether they’re independent or not,” said Lefebvre.

Munroe and Lefebvre plan to create both large and small Kobo Writing Life events that are carefully developed to suit the needs of bookstores across the country.

At WORD bookstore in Brooklyn, New York, author Barry Lyga, who has published traditionally in the past and is now releasing a self-published title, will meet with fans on December 4.

At the event, customers will receive cards with a QR code leading to WORD’s website, where they can purchase Lyga’s book. Lyga will discuss his life as a hybrid author, and Munroe will talk to attendees about the importance of buying eBooks through WORD, via Kobo, and supporting the local store. Free food and drinks will be provided to attendees, as well as an eReader giveaway.

For her part, Burke highly recommends stores try out an event with Kobo Writing Life. “I wish I could do one once a year,” she said. “This turned out so well.”