Sorcery of Thorns follows Elisabeth Scrivener, an orphan girl being raised in one of the Kingdom of Austermeer’s Great Libraries, where she hopes to become a warden and protect the kingdom from the power of magical textbooks called “grimoires” by keeping them from the hands of sorcerers. But when one is released in an act of sabotage, Elisabeth must work together with her sworn enemy, a sorcerer named Nathaniel Thorn, and his demonic servant to prove she wasn’t the one who did it. 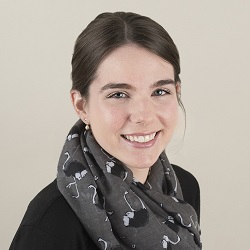 “A beautiful, dark, atmospheric YA fantasy that kept me guessing and my heart pounding, Sorcery of Thorns is set in a world where libraries are full of magical books that contain all the mysteries of the world,” said Danica Ramgoolam of Townie Books in Crested Butte, Colorado. “Elisabeth Scrivener is an awesome, strong, brave character who doesn’t need rescuing and is determined to fight evil, even though her definitions of evil keep shifting as she discovers the truth. The love story is quirky, steamy, and not cheesy, which I loved, and I grew so attached to the characters and their struggles.”

Rogerson is the author of the New York Times bestseller An Enchantment of Ravens. She has a bachelor’s degree in cultural anthropology from Miami University. When not reading or writing, she enjoys sketching, gaming, making pudding, and watching documentaries.

Here, Bookselling This Week talks worldbuilding and craft with Rogerson.

Bookselling This Week: What inspired you to write this story?

Margaret Rogerson: After finishing my first book, An Enchantment of Ravens, I succumbed to the infamous sophomore novel crisis. I spent about a year and a half working on manuscripts that lacked some essential spark. During that time, I threw out somewhere close to 200,000 words — the equivalent of two completed novels. Eventually, I realized that I needed to rediscover my joy of writing by choosing a topic I felt truly passionate about, the same way my passion for art inspired An Enchantment of Ravens. Books sprang instantly to mind. Since I write fantasy, I wanted to make them magical in some way, and that led to coming up with the idea for the living grimoires and the Great Libraries.

BTW: How did you create Elisabeth’s character? Why did you decide to center the story on her? 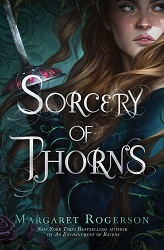 MR: I knew that the main character needed to have a deep connection with the Great Libraries in order to tell the story I had in mind, so I created Elisabeth around that initial concept. She ended up being an orphan who grew up in a library, without any children her own age to interact with, so the books became her friends instead of people. Her peculiar upbringing shaped her personality in specific ways that I enjoyed discovering as I drafted — another character calls her a “feral librarian” and isn’t necessarily wrong about that.

BTW: Sorcery of Thorns is set in the Kingdom of Austermeer’s Great Libraries, which are home to magical books called grimoires. How did you build this world? Why libraries?

MR: The libraries came first, and the Kingdom of Austermeer second. I always build worlds around the needs of the characters, and to a lesser extent the plot, because I find that when I try to insert characters into a pre-established setting, I have trouble giving them satisfying developmental arcs. A late Regency, early Victorian-based world ultimately felt right for the conflicts the characters were facing. One of the most fun parts of the worldbuilding ended up being the kingdom’s history, in which many pivotal events were defined by magic, like a medieval war won with necromancy and a period of magical reformation that made certain spells and artifacts illegal.

BTW: This book features excerpts from some of the grimoires Elisabeth encounters. What was the process of writing those like? Did you have to do any outside research?

MR: I had a blast writing Elisabeth’s interactions with the grimoires. Fortunately, since their contents are so fantasy based — she reads a few excerpts from a book about the history of sorcery, and another about demons — I didn’t have to do research. My main consideration was giving each grimoire a unique personality, as well as figuring out what magical qualities they should have. For example, the first grimoire is friendly and opens itself to sections it thinks she might be interested in, while the second, the Codex Daemonicus, turns out to be indecipherable. Its sentences crawl across the pages, rearranging themselves into different paragraphs faster than she can read them.

BTW: Demons also play a role in this book. Why did you decide to incorporate this element? What went into creating Nathaniel’s demon, Silas?

MR: I figured out fairly early on that I wanted to base the magic system on classic demonology. It’s a fun system to work with because many fantasy readers are already familiar with the premise: a magician summons a demon, makes a bargain with it in exchange for power, the demon then becomes their servant, etc. Using an existing magic system felt more accessible to me, and demonology specifically gave sorcery the sinister air that I wanted.

Silas was initially inspired by a side character in An Enchantment of Ravens named Gadfly, who I enjoyed writing so much that I wanted to write a similar character in my next book as part of the main cast. I love writing non-human characters, because they can end up being involved in such complicated and interesting relationships with the human characters. Silas is driven by an insatiable hunger for human life, but also genuinely cares about Nathaniel despite being destined to kill him, which made for an intense emotional conflict.

BTW: While the Kingdom of Austermeer is fictional, Elisabeth encounters real issues regarding women’s security and autonomy, such as how she isn’t taken seriously by medical professionals and the anxiety she feels encountering men on the streets. How much of the current political conversation inspired events in this story?

MR: Without going into too many spoilers, there’s certainly a reason why the book’s villain is a powerful male politician. The struggles that Elisabeth faces are more or less true to 19th-century history, when men who wanted to get rid of difficult women could have them institutionalized for any number of trivial reasons. Women were admitted to asylums for “reading too many novels” (believed to inflame the female brain) or even for exhibiting “political excitement.” It’s terrifying to think about, and worse to consider that men in positions of power are still using similarly manipulative tactics to dismiss and control women today.

BTW: Another issue that’s at the center of this book is what we should do with dangerous knowledge. The wardens of the Great Libraries choose to lock away and protect certain grimoires, instead of destroying them altogether. Can you speak more to this aspect of the book?

MR: Many of the high classification grimoires contain spells that have the potential to cause terrible harm. Conversely, those same spells could save lives. The grimoires themselves are very dangerous, perhaps even evil beings, but they didn’t choose to be that way. They were created by humans, and therefore had no part in determining their own nature. Can they be blamed for wanting to hurt people? Do their own lives have value? Can they be good as well as evil, just like the knowledge they contain?

These are underlying questions in Sorcery of Thorns, some of which don’t have easy answers. Elisabeth’s journey involves learning that good and evil coexist in all things, even the things she loves. I hope readers walk away with the message that it’s more important to have an open mind and keep asking questions than it is to know all the answers.

MR: My current project is still under wraps, but I can share that I thought of the idea for it after a visit to a psychic, who told me that he kept seeing ghosts in my cards and suggested I write a book about ghosts.