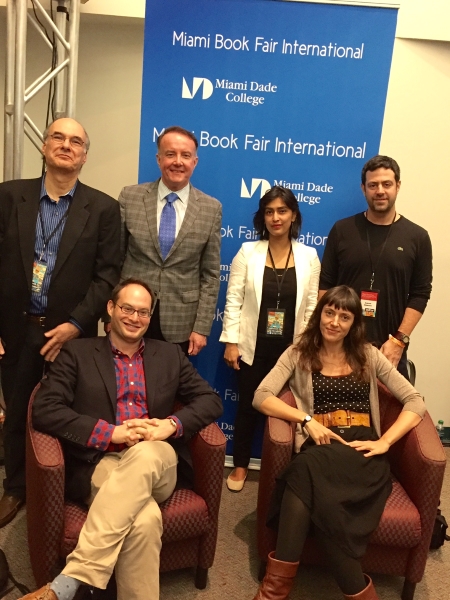 On Sunday, November 23, at the Miami Book Fair International, in the panel discussion “Do Monsters Live in Our Laptops?,” book industry experts discussed whether the promise of digitization as a democratizing force has instead led to large corporations dominating the book industry.

Appearing on the panel was Andrew Albanese, Publishers Weekly senior writer; Franklin Foer, the editor of the New Republic; Astra Taylor, author of The People’s Platform; and Oren Teicher, the American Booksellers Association’s CEO. The panel discussion was moderated by Christopher Kenneally, host of the “Beyond the Book” podcast from the non-profit Copyright Clearance Center.

Highlights of the panel included discussions about publisher consolidation, as well as a look at the Hachette-Amazon dispute regarding e-book pricing and whether Amazon holds monopoly power in the book industry and, if so, what can be done about it.

“The title of your session about monsters living in laptops is very apropos,” said Teicher. “And it’s important to disabuse you of the notion that the monsters in this laptop are the Muppet-cuddly kind of folks. These are big, massive companies.”

And while the merger of Penguin and Random House certainly concerned booksellers, Teicher continued, the combined global business of Penguin and Random House is just five percent of Amazon’s sales. “And if you take the big-five publishers and put them all together we are barely in double digits in comparison to what Amazon does. This company, Amazon, is massive and it influences everything about the book business.”

More importantly, books have become loss leaders for Amazon.com, Teicher said. “Those of us in the book business need to understand that our business, and ultimately … the interest of consumers, is being interfered with because there is a company that is using [the book industry and its consumers] as collateral damage to do something else.”

The Amazon-Hachette dispute, said Albanese, “was pitched to us as the battle for the future of the book, and, in reality, what it was a negotiation between two parties.” As public as the dispute was, he noted, it ended in a private settlement, the terms not disclosed.  “It was a little frustrating to me because I believe we need to have a good conversation about the future of digital reading. We have to talk about digital rights management, data in libraries, and all of these things…. We are a long way from getting that conversation.”

Albanese added that if Amazon is going to be discussed as a monopoly then the five big publishers must be discussed as a “cartel. They control 90 percent of the bestseller list. One company controls 50 percent of the bestseller list. I think what we’re seeing are the beginning stages of a longer battle over how we’re going to access digital books.”

Kenneally noted that Amazon accounts for 41 percent of book sales and 67 percent of e-book sales.

In response, Foer said those numbers were “overwhelming” and decades ago, this type of market dominance would have prompted the government to intervene to “break up the company or impose some other sort of remedies.” He stressed that when the book industry is under threat the book is under threat. Amazon’s price cutting has a ripple effect in the industry, he argued. “When publishers get squeezed, they squeeze the authors.” He added, “As companies become bigger and fewer, writers have fewer places to sell their books.”

Despite the challenges facing the book industry, Teicher noted, “The extraordinarily good news about our business is that … [independent bookstores] actually are doing well” and “are providing an extraordinary, indispensable function in their communities everywhere across the United States. And the good news is these stores are doing better today than they were a decade ago.” He noted that an event such as Small Business Saturday, where approximately $5.7 billion was spent at independent retailers in a single Saturday last year, shows that consumers appreciate the value of shopping at locally owned businesses.