Author Jenny Lawson expected a relatively small number of orders to come in after her official announcement that the website for Nowhere Bookshop was now live. But when Lawson made that announcement on her blog on Tuesday, October 15, her surprise turned to shock as hundreds of orders began flowing into Nowhere’s IndieCommerce online storefront. 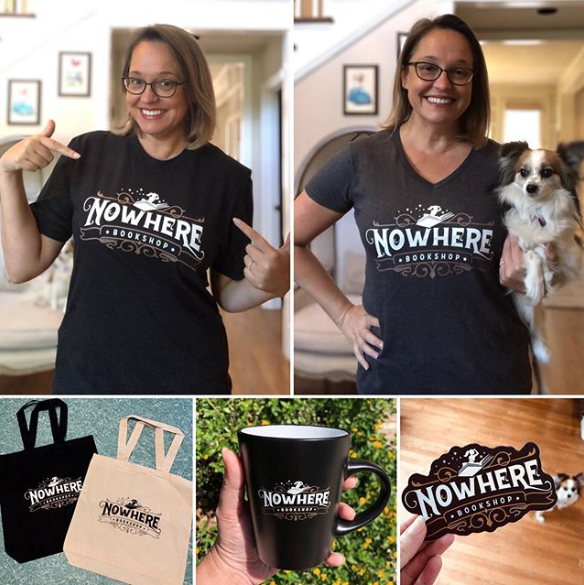 Jenny Lawson shows off her Nowhere Bookshop merchandise on Instragram.

Earlier this month, Bookselling This Week reported that Lawson, author of the books Let’s Pretend This Never Happened (Berkley), Furiously Happy (Flatiron), and You Are Here (Flatiron) and who blogs at The Bloggess, was planning to open the San Antonio, Texas, store later this year with her husband, Victor Lawson. She told BTW she hopes the store will be a community and event-driven space with a robust program of readings and workshops, including a bar that serves beer, wine, and coffee.

Since the store is not yet selling its full inventory of books and gifts, the influx of 1,800 orders this week was even more surprising due to the limited merchandise currently on offer, Lawson said.

“The only things we’re selling right now are signed copies of my own books and Nowhere Bookshop merchandise like T-shirts, mugs, and tote bags, so it was sort of doubly shocking how many people came out and said, ok, we’ll buy merch from this nonexistent idea of a store that we want to be a part of,” she said. “It’s really great, like an entire community building a bookshop together.”

Lawson told BTW that having a pre-existing broad base of support makes all the difference when it came to this unexpected flow of orders. As an established author and blogger, it has been helpful to have that a built-in audience of readers and followers right from the beginning.

“I have had so many people for the last three or four months who were like, ‘We want to help you! What can we do to help you?’ And every time I’m like, ‘I don’t know! It’s so complicated. I don’t really know what I’m doing!’” said Lawson. “This was sort of the first time I was able to say, ‘If you’re able to help, here!’ And then suddenly hundreds and hundreds of people showed up and it was kind of amazing.”

IndieCommerce Senior Manager Geetha Nathan said that while the website was technically able to receive orders beginning several days earlier, the store saw a big traffic spike on October 15, the day of The Bloggess announcement, leading to $58,000 worth of orders. So far the store has gotten 1,800 completed orders.

“It’s unique to see a brand-new store, especially one without a physical location yet, have so many orders in their first week of launching the site,” said IndieCommerce Specialist Ryan Quinn. “We’re looking forward to seeing how they grow and seeing how we, the IndieCommerce team, can help them do so.”

With the store likely opening in January, the Lawsons and store manager Elizabeth Jordan, who most recently served as CEO of BookPeople in Austin, Texas, are currently working with architects to make up a floor plan, and this week, contractors will start to come in with bids. At the moment, though, all three of them have their hands occupied with fulfilling orders, as boxes and items to ship fill living rooms, guest rooms, and garages. 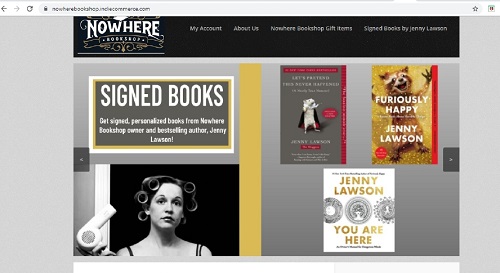 In addition to Nowhere Bookshop merch, Lawson's website is currently only selling her own three books while she is preparing to open a physical store this winter.

“It’s all so new to me that I am still just kind of winging it,” said Lawson. “I’m very lucky we have Elizabeth, who came from BookPeople so she knows so much about the industry. And my husband is really good with business. Basically, my job is to do all the ridiculous stuff and to handle the social media.”

Now that Jordan has sent out the first batch of books to customers, the store is reordering stock and will be getting in more screen-printed T-shirts and mugs to send out; everyone who placed an order was also promised a free customized book plate with their order while supplies last. The Nowhere Bookshop website currently notes that some of the more popular style or sized items may arrive a few weeks behind schedule due to the unexpected volume of orders. Right now, said Lawson, they are considering hiring some paid or volunteer assistance to help with the task of fulfillment.

“It’s overwhelming but it’s such a good problem to have,” she said. “At the time it was like oh, ok, we went through all of our stock super quick we had to go put in a rush order to try to get new stock in... and then there’s a problem with where do you put that many packages in the first place? We may have to end up getting some extra help.”

While Lawson, who is very candid about her anxiety, depression, agoraphobia, and other mental health issues in her books and on her blog, said that the whole ordering and fulfilling process has been exacerbating her anxiety, she emphasizes that she is deeply grateful for all of the support.