At the 14th annual Library of Congress National Book Festival, official bookseller Politics & Prose will be showcasing upwards of 17,000 copies of more than 200 titles and sharing the spotlight with fellow indie bookstores through a specially created wallpaper featuring the names of all ABA’s member stores.

With the August 30 event just two weeks away, the store is busy making final arrangements for the daylong celebration at the Washington Convention Center. “We are exactly where we hoped we would be in terms of planning and preparing for the festival,” said store co-owner Bradley Graham.

Author pavilions at the festival will highlight writers from a wide range of literary genres — including children’s books, culinary arts, fiction and mystery, and more. The Book Sales Pavilion will be a 200-foot by 80-foot space, where Politics & Prose will handle sales of titles from all featured authors.  Prominently displayed in the pavilion will be special “wallpaper,” created by ABA, featuring the names and locations of more than 2,000 member bookstores. The displays will measure 12 feet by 8 feet, and five displays will be in the selling space.

“This is the first time that anything like this, featuring the whole community of independent bookstores, has been tried at the National Book Festival,” said Graham, whose store was tapped to be the event’s first-ever independent bookseller earlier this summer. “What we hope to do is take this opportunity to let people who come to the festival know that the indie bookselling community is alive and well in the United States.” 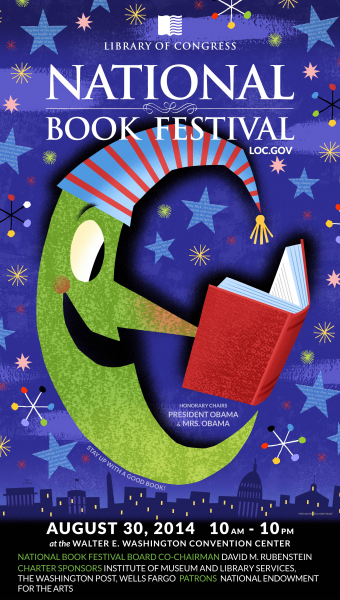 Located on the second floor of the convention center, next to the author signing lines and housed on the floor just above and below a variety of author events, Politics & Prose’s vendor booth will be in the center of the action. “It’s going to be, we hope, a very action-packed day with simultaneous author talks and signings going on, covering a range of literary genres and subject areas,” said Graham.

Ingram Content Group is working with Politics & Prose to coordinate the delivery of the tens of thousands of titles for the festival. Eighteen cash registers will be available to ring up customer purchases, and many of the store’s employees have been enlisted to man them or to be on the sales floor throughout the day. Four ABA staff members, including CEO Oren Teicher, will be joining Politics & Prose to help with the wallpaper and with customers on the sales floor.

Due to the re-seeding of the National Mall, this is the first time the festival will be held indoors at the convention center. “There have been many moving parts in preparing for this festival,” said Graham. “The wild card for everyone remains just how many people are going to show up because the festival, in 14 years of existence, has never been held indoors before — it’s always been outdoors on the mall, and never over Labor Day weekend.”

Politics & Prose is sharing details about the event through its website and social media. It’s also conducting and promoting interviews with festival authors to heighten customers’ awareness of the event. While it remains to be seen how the new date and venue affects this year’s celebration, Graham said, “We think we’re in a good position right now for a successful festival.”