Post-Election, Bookstores Offer Safe Spaces for Communities to Come Together

Following last week’s divisive presidential election, independent booksellers across the country are reaching out to remind customers that their bookstores are safe, bipartisan spaces where community members can come together to communicate, commiserate, discuss politics, or just escape into a good book.

In the November 9 edition of Bookselling This Week, ABA CEO Oren Teicher released a statement on the importance of bookstores in healing the divisions that the contentious campaign and election have brought to the fore. As the week continued, bookstore owners used store newsletters, e-mail messages to customers, and social media posts to offer customers a place of solace after the election had shocked many into realizing the degree of political division in the U.S. 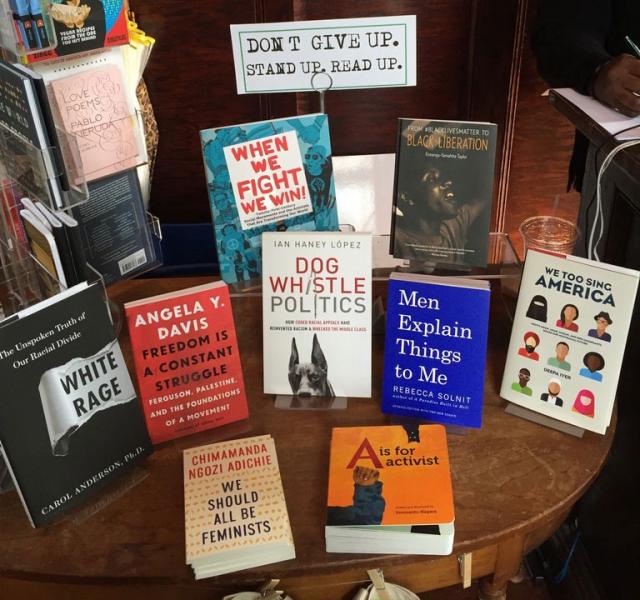 The Politics & Prose "Stand Up, Read Up" book display.

Politics & Prose owners Brad Graham and Lissa Muscatine provided customers with a message of reassurance in the Washington, D.C., store’s e-newsletter last week. The post, titled “In Moments Like This, We Still Have Books,” reads: “P&P will still be here to provide a needed sense of community and a place of informed and respectful discussion. No excuse should be necessary to dive into a good book, but especially in challenging moments, books can offer a welcome break — and more. They are wellsprings of solace, wisdom, and deeper understanding. Our booksellers are ready as always to suggest books that will make you think, reflect, have a good laugh or a good cry… And be assured that our bookstore will continue to do its small part to help bring Washington, our country, and the world together.”

The message also invited customers to check out the store’s new “Don’t Give Up. Stand Up. Read Up” book display.

In Steamboat Springs, Colorado, Emily Katzman, owner of Off the Beaten Path, hosted a political letter “write-in” on Monday, November 14. The nonpartisan gathering gave people a place to meet their neighbors, share and discuss ideas, and write letters to elected officials. Katzman said 18 community members showed up to the event, where the store provided templates and suggestions on writing an effective letter to legislators, pertinent names and addresses, proofreading support, envelopes and postage, and complimentary mailing.

“I swell with pride when I think about the role this bookstore serves as a community gathering space, a place where others, too, feel free to meet, engage, expand, or even to retreat and escape,” Katzman wrote in a letter encouraging other Mountains & Plains Independent Booksellers Association members to try a similar event at their stores. “To be candid, I’ve felt rather disengaged and politically powerless for a long time. Based on casual conversations I’ve had with friends and family and, yes, bookstore patrons, I get the sense many people feel this way, too.”

Katzman characterized the November 14 meeting as “very productive” and said participants spent about two hours discussing individual issues that mattered to them, including the potential deportation of friends who are immigrants, the environment and climate change, and public land concerns specific to northwest Colorado. 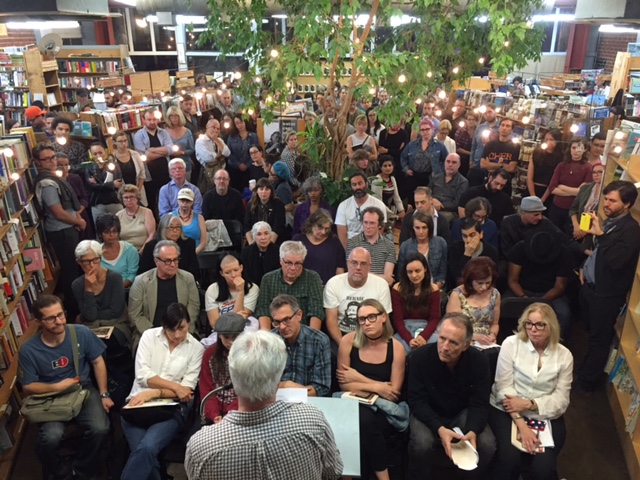 “Ultimately we realized that in order to write a really effective letter to a congressperson you have to be armed with well-researched facts,” Katzman told BTW. “We decided to set up regular meetings and divide up the labor on research. Then we’ll present what we find to people so we can send letters to those same lawmakers that will have more of an impact.”

Katzman said she hopes the group’s next meeting will resemble something closer to a bipartisan meeting; future outreach will focus on attracting a larger variety of people with a greater diversity of viewpoints.

On Monday, November 14, Skylight Books in Los Angeles teamed up with the Los Angeles Review of Books to invite writers, including David Ulin and Aimee Bender, artists, critics, and the public to express their post-election feelings through readings of their own and others’ work. The store also displayed a selection of books germane to the political moment along with a list of organizations, local and otherwise, needing donations.

“What Monday’s event showed us is that there’s a real thirst for community get-togethers and that there are plenty of members of our customer base who are eager to participate in the conversation,” said Williams. “There’s an ongoing discussion here at Skylight about how best to respond to the election, and creating opportunities for our customers to express themselves is going to need to be a part of it.”

Following the election, Matt Keliher of SubText Books in St. Paul, Minnesota, said he’d like the store to be a place where political action can flourish and where the community can gather.

“In the aftermath of the election, many folks had their values and identities shaken to their very core, including me” Keliher told BTW. “They flocked to the bookstore in search of a community that shared their experience and perspective. They hoped to find comfort, and sci-fi escapist literature. It is the role of a bookstore to reflect the needs of the community it represents. And I know that this is a need within my community.”

SubText is currently working on creating a new political action committee (PAC), which Keliher described as “a small group of determined, vigilant, like-minded folks who want to get more involved in local politics.” The store is also offering handouts of contact information for legislators and representatives and even creating a PAC book club, whose first read will be Becoming A Citizen Activist by Nick Lacata (Sasquatch Books).

“We want to be a place where people have the opportunity to direct their feelings into action,” Keliher said. “[After reading Becoming a Citizen Activist, our book club will] cover a whole host of other politically engaging titles.”

Josh Christie and Emily Russo, owners of Print: A Bookstore, opening December 3 in Portland, Maine, wrote in an e-mail to prospective customers that as the results of Tuesday’s election came in, opening their bookstore began to feel even more important than it had that very morning. 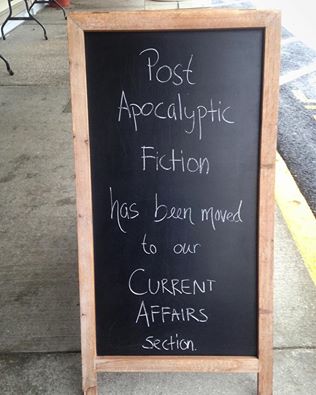 Chalkboard sign posted outside of The Bookloft, which went viral after the election.

“Bookstores, especially those deeply entrenched in their communities, have always been crucial gathering places for residents to turn to in both celebration and mourning. Books provide and will continue to provide windows into the experiences of others and mirrors for the disenfranchised among us,” the letter stated. “We spent yesterday discussing how Print can be as committed to the ideas of empathy and progress as possible. This is a guiding principle that will be reflected both in the books that we carry and in how we work with others in our neighborhood.”

With that in mind, the owners stated that they plan to make donations on behalf of Print to two local charitable organizations: The Locker Project, which helps food-insecure children in Maine, and The Telling Room, a Portland-based nonprofit writing center that works closely with the city’s immigrant population.

In an e-mail to customers, Gayle Shanks, the co-owner of Changing Hands in Tempe and Phoenix, Arizona, offered customers something constructive to do following the election: she invited them to attend a discussion led by attorney and Changing Hands fan John Dacey. Shanks wrote: “If, like me, you want to start anew after the election, determined to be the change you want to see in the world, come to the talk at The Newton on de-privatizing prisons ... In the meantime, books help — at least they help me.”

After days of wondering what to do, author Ann Patchett, who owns Parnassus Books in Nashville, Tennessee, with Karen Hayes, wrote on the Parnassus blog that what she most wanted to give people, at this moment, was a bookstore.

“Here at Parnassus — and at bookstores all across the country,” Patchett wrote, “we are offering shelter from the storm. Not only do we promise a culture of intellectual freedom and intellectual expansion, we promise dogs who love without judgment… At Parnassus we specialize in books, and books, along with dogs, have been the greatest comfort of my life. Karen Hayes and I opened the doors five years ago and since then Parnassus has been a vital part of Nashville’s community through good times and bad. Regardless of whether or not you see this as a good time, a bad time, or just another moment in history’s larger picture, we’re here for you now.”

Patchett’s post also listed several titles she thought might offer instruction for the present moment, including Underground Airlines by Ben H. Winters (Mulholland Books), Destiny and Power: The American Odyssey of George Herbert Walker Bush by Jon Meacham (Random House), This Changes Everything: Capitalism vs. The Climate by Naomi Klein (Simon & Schuster), The Handmaid’s Tale by Margaret Atwood (Anchor), and The Angel of History by Rabih Alameddine (Atlantic Monthly Press).

A photo of the chalkboard sign in front of The Bookloft in Great Barrington, Massachusetts, became an unexpected viral sensation after it was posted to the store’s Facebook account last week. The sign, which reads, “Post Apocalyptic Fiction has been moved to our Current Affairs section,” was created by bookseller Zazu Galdos-Shapiro, said store owner Pam Pescosolido.

On Monday, November 14, the store also posted the back of the sign on Facebook: “Just a reminder: The Bookloft is, and will always be, a SAFE SPACE for every person, regardless of race, religion, sexual orientation, gender identity, abledness, etc. We’re here for you. (Plus we have books. You’re probably going to need them.)”

Pescosolido, who bought The Bookloft from Eric and Ev Wilska earlier this year, was out of town when the photo was posted and saw the image for the first time on her news feed. She told BTW that she is “proud of store staff for doing an amazing job in numerous ways over the last week,” including creating the signs, being there for customers, and providing support to her and to each other. 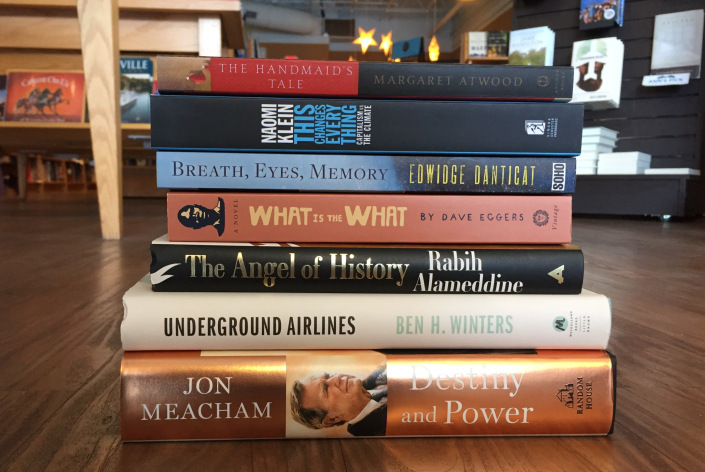 The post, which was also shared with customers via the store’s e-newsletter, reads: “In response to the recent political unpleasantness, we at The Regulator rededicate ourselves to supporting diversity and sustaining civil discourse in our community… As we approach The Regulator’s 40th anniversary in December, we especially want to thank all of you who continue to support our endeavors. Our founding goal was to create a space where everyone can feel comfortable to thoughtfully explore their lives and the world around them. We hope you will join with us in carrying this ideal forward. And, as the saying goes — don’t anybody mess with our First Amendment rights!”

Bookstores that are connecting with customers in creative ways post-election are encouraged to contact Liz Button. Some stores’ activities will be featured in a follow-up piece in next week’s issue.