A Q&A With Megan Hunter, Author of November’s #1 Indie Next List Pick

Megan Hunter’s dystopic debut novel The End We Start From (Grove Press, November 7) is booksellers’ number-one pick for the November Indie Next List. 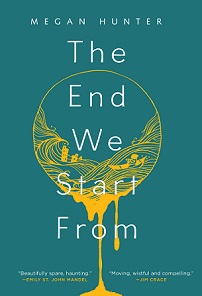 Written in a poetry-prose hybrid that resembles fragments of a diary, this modern-day parable opens with an unnamed woman giving birth to her first child, Z, as London is overtaken by catastrophic flooding. The journey of mother and son in search of refuge from the rising water is punctuated by moments of humanity and kindness, and Z thrives against all odds, even as civilization crumbles, the sea overtakes the land, and dangerous crowds clamor for basic supplies.

“Luminous and sparse, heartbreaking yet hopeful, The End We Start From is a lyrical rumination on environment, normalcy in the midst of crisis, new motherhood, unavoidable endings, and tentative beginnings,” said Rebecca Speas, a bookseller at One More Page Books in Arlington, Virginia. “A slim and stunning debut whose echoes will be thunderous.” The End We Start From was also an Indies Introduce Summer/Fall 2017 selection.

Hunter lives in Cambridge, England, with her two young children. She has a bachelor of arts degree in English Literature from Sussex University and a masters of philosophy degree in English Literature: Criticism and Culture from Jesus College, Cambridge. Her poetry has been shortlisted for the Bridport Prize, and she was a finalist for the Aesthetica Creative Writing Award for her short story “Selfing.”

The End We Start From was pre-empted by publishers from around the world following the 2016 London Book Fair. It was published in the U.K. in May and film rights have been sold. Here, Hunter talks with Bookselling This Week about the book’s unique, stripped-down style, her book’s parallels to the recent hurricanes in the Americas, and the singular nature of a mother’s love.

Bookselling This Week: Where did the idea come from for this story?

MH: I was actually writing a longer novel about successive generations of women giving birth. This was going to be one of the generations of women who was giving birth slightly in the future, as I imagined her. The rest of the novel was of a fairly conventional style, but this part just seemed to have its own life and its own momentum. So it sort of emerged from some kind of idea of a larger work.

I’d been thinking about disaster for a while and reading novels about it, and thinking about motherhood, too, so it was just bringing those two things together, setting them side by side and thinking, “Well, what would happen if you just had a newborn baby…” and using the inherent drama of that. The novel begins and she’s literally hours from birth; there’s that whole kind of intrinsic drama of birth set alongside the extraordinary situation of this catastrophe. All the energy kind of comes from putting those two things together.

BTW: Some of the horrific scenes depicted in your book seem a bit too familiar, especially after parts of Houston, Florida, the Caribbean islands, and Puerto Rico were devastated by hurricanes in recent months. Have you been watching the news in the U.K. and thinking about the parallels?

MH: Yes, I’ve been seeing lots of reports and it’s horrific, really. I’ve been aware of catastrophic flooding in other parts of the world, in the U.K., as well as the flooding with Hurricane Katrina, and I’ve also been hearing reports about the refugee crisis. I don’t think I thought this through consciously before I wrote it, but I think what I was trying to do was process these things that I was hearing about in a very distant way but bringing them very, very close to home, and to imagine, what if that happened to somebody like me? A lot of it is about the emotional impact. The book is fairly light on detail, but what I was trying to imagine and to fictionalize was the emotional, existential impact of a disaster like that.

BTW: As you intimated, it’s not really explained in the book why the flood happens. Was climate change on your mind when you wrote the book?

MH: Yes, definitely. I’ve been concerned about climate change for most of my life, and I think when you have children you begin to think, I’m not going to be living until 2100 but my children may be. You start to think about that as a real thing; it’s not a distant possibility anymore. And this is all becoming more and more real with the extreme weather that’s been happening. That was one of the reasons why it was important to me that it was a flood because that is one of the main risks of climate change, with sea levels rising, so it’s become a very realistic possibility.

The other reason it was a flood is for the metaphorical weight of a flood and the link to the woman’s body — the waters of life, the amniotic fluid. The world floods and her water breaks at the same time so there is that link between the two events.

BTW: Phrases in italics are interspersed throughout the text that tell the story of Noah and the ark along with other stories that reference the earth’s creation. Were these actual passages from the Bible or are they your reinterpretations?

MH: They’re mainly adaptations. Some are from the Bible but most of them are adapted from the many diverse creation myths from around the world that come from lots of different countries and cultures, mainly from that mythological period prior to the Bible. But there is the odd passage from the Bible, and obviously there is the reference to the biblical flood.

It’s a very, very common story. An alternative title for the book at one point was The Earth Diver, which I found to be the most common creation myth around the world. It’s found in lots of very geographically separated countries: the myth of some kind of creature going down into the water and bringing back a scrap of material that then becomes the whole world.

BTW: One of the other ideas in the book is how people coexist during disasters, from changes in the dynamics of families to the creation of a mob mentality. In writing this book, did you also attempt to explore the way disaster affects human behavior?

MH: I think the whole book was me interrogating my sense of how we relate to each other when we’re in particularly extreme situations. I think the book has a very pessimistic view of mass groups of people, of crowds, and I suppose that reflects my sense of global inequality and global injustice but also the day-to-day callousness of people not taking care of each other at that public or communal level. But I’m not a hopeless person; I know there’s a huge amount of amazing kindness and heroism in the world and examples of people putting others before themselves. So I hope I’ve also shown some hopeful examples of people banding together when it’s not just for their own benefit.

There is also ultimately this relationship at the core of the book between mother and child. The mother in the book is very much putting the child’s life, in a sense, above her own, as you do. With that, I was just thinking about how when you have a child you have this incredible love for them; it operates on that one-to-one basis, but how does that translate into how we relate to the rest of the world, and how much further does that go? It’s something that I’ve thought about quite a lot when I had my children: that kind of overpowering, infinite love you have for one person.

BTW: Why did you decide to only use first initials when referring to the book’s characters?

MH: It just felt natural to me. I’ve kept a diary at points in my life and I’ve always referred to people by their initials. I would never write their full name; I wouldn’t need to because obviously I know what their name is. To me, it reflects the intimacy of the text. There’s also a sense of it being something like a fable or a parable whereby the people are kind of everywoman/everyman characters; so it’s that as well. I didn’t really find it a big deal when I wrote it, but I’m always asked about it now, so I know it’s quite prominent in the book for people.

BTW: Your title comes from a quote from T.S. Eliot’s Four Quartets, which also prefaces the book: “What we call the beginning is often the end/And to make an end is to make a beginning/The end is where we start from.” How did you choose this quote?

MH: I was just kind of scribbling and playing around, drawing little covers; I think maybe I’d scribbled it down during the writing of the book, but I hadn’t actually considered it as a title. The idea of it as a title definitely came afterward — it really felt like a kind of gift. It’s so fitting because obviously there is this huge ending for her and there’s also an amazing start. The book has a kind of circular structure as well, which also fits the title.