In late July, the Washington Post published an in-depth article by columnist Steven Pearlstein headlined “Is Amazon Getting Too Big?” In the piece, Pearlstein wrote of rising concerns about competition and market power, and whether U.S. antitrust laws were adequate in dealing with technology companies such as Amazon.

The article focused in large part on Lina Khan, who wrote a comprehensive and attention-grabbing article in the Yale Law Journal, “Amazon’s Antitrust Paradox,” and it also discussed the efforts by New America, a progressive think tank, to shed light on how Amazon just might be entering monopoly territory. Khan is a fellow with the Open Markets program at New America, where she researches the concentration of power in America’s political economy and the evolution of antitrust laws.

Following the publication of Pearlstein’s Washington Post piece, Khan responded via e-mail to some key questions regarding Amazon, U.S. antitrust law, and the online giant’s role in the book industry.

Bookselling This Week: Do you think it is significant that a Jeff Bezos-owned newspaper is now taking on the idea that Amazon might be a monopoly? If yes, why? 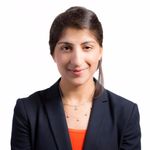 Lina Khan: When news first broke that Jeff Bezos was purchasing the Washington Post, many wondered what this would mean for the newspaper’s coverage of Amazon. Indeed, some speculated that Bezos bought the publication in order to sway Beltway coverage of the antitrust issues that Amazon would inevitably come to face. For the Post to publish as its leading business piece in the Sunday edition a story questioning Amazon’s growth and dominance is commendable. I look forward to the Washington Post’s continued coverage on this important issue.

BTW: Do you think technology has made it tougher for courts to determine when a company is violating antitrust laws, or is it antitrust law that is at fault? Or some of both?

LK: Congress originally passed antitrust laws in order to safeguard against excessive concentrations of economic power and control. Our antitrust laws were defanged by a new legal philosophy that took hold in the 1970s and 1980s. This “Chicago School” approach established that efficiency, measured in terms of “consumer welfare,” was the proper goal of antitrust. This move overturned a century of anti-monopoly thinking, which had been suspicious of excessive concentration and consolidation. Under the new “consumer welfare” regime, by contrast, concentration of power is assumed to be benign unless a company raises prices. This radical reorientation of our antitrust laws is the root of the problem we now face. New technologies are underscoring the problem and inviting a broader rethink of where competition policy went awry.

LK: Amazon’s dominance is different in a few critical regards. Standard Oil was dominant as a producer, and it used its control over oil to cut favorable deals with railroad companies and to squash rivals. A&P was dominant as a retailer, which gave it immense clout in negotiations with suppliers and producers. Amazon, by contrast, serves as both a producer/supplier as a well as a retailer, as well as a platform for other producers/suppliers and other retailers. Amazon is perhaps best understood as an infrastructure company, on which a host of other businesses now depend. In this way Amazon has become a gatekeeper, a chokepoint, and it can use that power in abusive and anti-competitive ways. The other key difference is that Amazon is an information-age company. It collects a swath of information on the consumers and the companies using its services, and it can use that data to further entrench its dominance. For this reason, in some critical regards Amazon has even more power than Standard Oil or A&P did in their heyday.

BTW: Does Amazon represent a monopoly in the book industry, given its size and dominance, and does its size there alone warrant any antitrust action, in your opinion?

LK: Amazon enjoys a dominant share of both the e-book and print book markets. There are different legal and technical definitions of monopoly. But let’s look at Milton Friedman’s definition. In Capitalism & Freedom he wrote, “Monopoly exists when a specific individual or enterprise has sufficient control over a particular product or service to determine significantly the terms on which other individuals shall have access to it.” The company certainly “determines significantly” the terms on which a growing share of Americans access the book market. And equally as critically, Amazon enjoys monopsony power over publishers and may dictate terms to them.

Under existing U.S. law, attaining a large size alone is not a violation of antitrust laws. Only if a company attained its size through anticompetitive means, or abuses its dominant position, does the company run afoul of antitrust laws. That said, several aspects of how Amazon has used and acquired its size seem anticompetitive. At minimum, its conduct merits an antitrust investigation.