Tubby & Coo’s Doubles Down on Board Game Trend

Candice Huber, owner of Tubby & Coo’s Mid-City Book Shop in New Orleans, has introduced a host of board game-related initiatives in conjunction with the store’s third anniversary this month, including board game rental and exchange programs and a board game club.

“We’ve been selling board games since we opened, but the specific board game-café model is what’s new for the third anniversary,” said Huber. This popular new business model is used by bars and coffee shops that charge a cover for people to play games while enjoying their food and drink, capitalizing on the increasing popularity of board games in recent years. As reported in Adweek, in the last year, board game sales in the U.S. grew by 28 percent, according to NPD Group, while global board game sales increased to $9.6 billion in 2016 from $9.3 billion in 2013, according to Euromonitor International.

Tubby & Coo’s, whose tagline is, “It’s all geek to me,” sells science fiction, fantasy, graphic novels, and children’s books and has hosted a board game night every Sunday since opening in 2014, drawing 20 to 30 people each week. According to Huber, while most of the board games she sells are under $60, she actually makes more money off of board games than books. Since opening, Tubby & Coo’s has developed a small but avid gaming community within the store, amidst the greater gaming community in the city, said Huber.

“Books and board games were hobbies for me and what I spent all of my time on outside of work, so now to be a professional nerd and do all this stuff is awesome,” said Huber, who also maintains a gaming blog where she reviews and ranks new games. “For me, this is a life dream come true.” 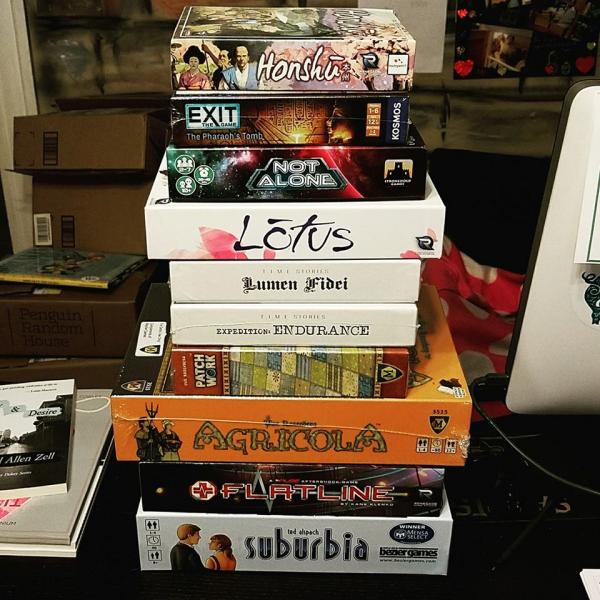 A few board games from the Tubby & Coo's collection

As part of her push to add more of a gaming focus to the store, Huber has created her own board game-café by converting the store’s reading room, which was rarely used, into a gaming room containing two tables and a game library. More than 230 different games from Huber’s personal board game collection are available to play, including classics like Jumanji and Settlers of Catan as well as newer strategy games like Agricola. Each game is labeled with a traffic-light color — red, yellow, or green — to indicate difficulty, and, said Huber, if people don’t know how to play a game, she teaches them.

Customers pay $5 to play all day, said Huber, and most customers are mid-level gamers who come in on weekends to play one- to two-hour strategy games. But the all-day deal has also been popular with families who come in on Saturdays, Huber said.

“Gamers don’t often end up buying books, but they do sometimes,” added Huber. “The main crossover is with families; people will come in and play games with their kids and buy kids’ books.”

Huber also offers an annual membership for $25, which includes five days of gaming as well as a discount on additional days ($3 instead of $5), two guest passes, one snack and one drink per week, 12 game rentals annually, and discounts on special gaming events. Since launching the membership program two weeks ago, Huber has already sold 10 to 15 annual memberships, even without any publicity or marketing efforts, and the program’s popularity has continued to spread through word of mouth.

In addition to the store’s new gaming room and weekly board game night, Tubby & Coo’s also has a new board game rental exchange program, which allows people to rent a game from the store’s stock and try it out before they buy it. The rental costs $1 per day for up to seven days, with a minimum two-day rental. In addition, customers can bring in board games they don’t play anymore to donate to the store’s game library in exchange for store credit.

Huber also brings games into the store by ordering demo copies from distributors; she will usually have at least one demo game out on display at all times. Distributors and game publishers send retailers demos at deeply discounted rates; the demos, which are similar to book publishers’ ARCs except they are available after the game is published, are used to help retailers sell the games through demonstrations.

In addition to these initiatives, Tubby & Coo’s also supports the local and regional game design and development community by organizing events through the Unpublished Game Network (Unpub), which helps unpublished games and their designers get constructive feedback through public play-tests, where people can test out unpublished games for free. The store held its first Unpub Mini event as part of its three-year anniversary celebration on Saturday, September 2, Huber said.

Huber, who runs the store on her own and is also crowdfunding a new publishing venture, has also developed partnerships with local businesses. She travels to breweries, restaurants, and coffee shops to put on game nights, which are often themed and will feature, for example, pirate, Halloween, or medieval-themed games.

“It’s more of a marketing thing for us, and it doesn’t cost anything. It’s where people are already, so we just bring games there. It gives people something to do and it allows people to learn about us,” said Huber. “We’re still fairly new; as much as we have done to get the word out, there are still people who don’t know we exist, so it helps with that. It also drives people in the community to these other businesses as well.”

Booksellers who would like to get started with board games would benefit from having someone on staff who knows about the gaming industry or, ideally, both the bookselling and the gaming industry, Huber said. It would be helpful to have someone who knows the different categories of games and who plays those games. This can help the store successfully market the games, since different types draw different crowds, she said.

Also like in the book industry, there are many different board game publishers, both independent and mainstream, Huber said. “There is a whole other distribution world for board games out there if you want to sell board games or get demo copies for your store," so it would be ideal to have someone who is somewhat familiar with it to help set it up, she said.

“The gaming industry is as vast as the book industry. There’s a lot going on in the board game industry: you can have direct accounts with publishers or you can have accounts with distributors, just like with books,” added Huber. “It’s very similar to the book industry, actually, so I don’t think it would be too difficult for a bookseller to catch on because it is very similar to books as far as how it works.”

A number of other bookstores across the country, including Aaron’s Books in Lititz, Pennsylvania, and Hearthside Books in Juneau, Alaska, have also capitalized on the board game trend.

Aaron’s Books’ Of Dice & Pen is a separate shop within the bookshop focusing on European-style tabletop games, role-playing games, graphic novels, and gifts and books from a variety of pop culture fan worlds. The shop also carries select comics, as well as snacks for those testing out demonstration copies of games, and hosts regular Dungeons and Dragons games, family game nights, game tournaments, and author and game creator events.

Hearthside’s Juneau Board Game Club meets on the first and third Sundays of every month from 12:00 to 5:00 p.m. in the Nugget Mall Community Room, located across from the store. Participants ages 14 and up can bring their own game to play or try out a new game; games are available both for purchase or to borrow from the store’s free board game lending library. Participants pay $5 for food and drink, which is used to cover the community room’s clean-up policy.