Wi13 Education: A Bookstore on Wheels: Owning and Operating a Bookmobile

The Winter Institute 13 education session “A Bookstore on Wheels: Owning and Operating a Bookmobile” focused on bookstores that have chosen to create a mobile version of their store and brand. 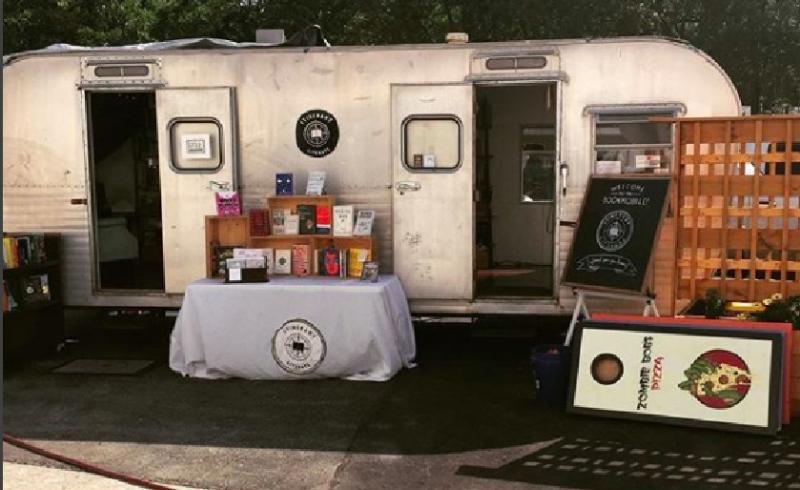 The Itinerant Literate Bookmobile based in Charleston, South Carolina

Thompson opened Itinerant Literate in 2015 with friend and publishing colleague Julia Turner as a way to ease themselves into opening their own brick-and-mortar store at a later date. After receiving positive feedback from other booksellers at Winter Institute 10 in Asheville, North Carolina, Thompson and Turner got started raising money via an Indiegogo campaign and ended up raising $9,536 from 93 backers.

“Neither of us had any retail experience or money, so we decided to test the idea in the way that a lot of food trucks had been starting out. That was our logic,” said Thompson.

In April 2015, they began doing pop-up events and started renovations on a 24-foot 1958 Yellowstone trailer they got for $3,000 off Craigslist. They were finished by April 29, 2016, the night before their advertised debut on Independent Bookstore Day. Now, Itinerant Literate primarily sets up shop at breweries and beer gardens, restaurants, coffee shops, street fairs, markets, and festivals, as well as “places with long brunch lines.” While they started out doing a few events a month, now they typically set up one location a week, but often do so three or four times a week.

“Charleston has a pretty healthy, cool market scene with night markets and artisans and people selling vintage clothes, and there are already a few mobile retailers in Charleston,” said Thompson. “We like to partner directly with businesses so we don’t have to worry about getting parking permits and we can be somewhere with lots of foot traffic and parking — so we are not limiting our flow of customers.” 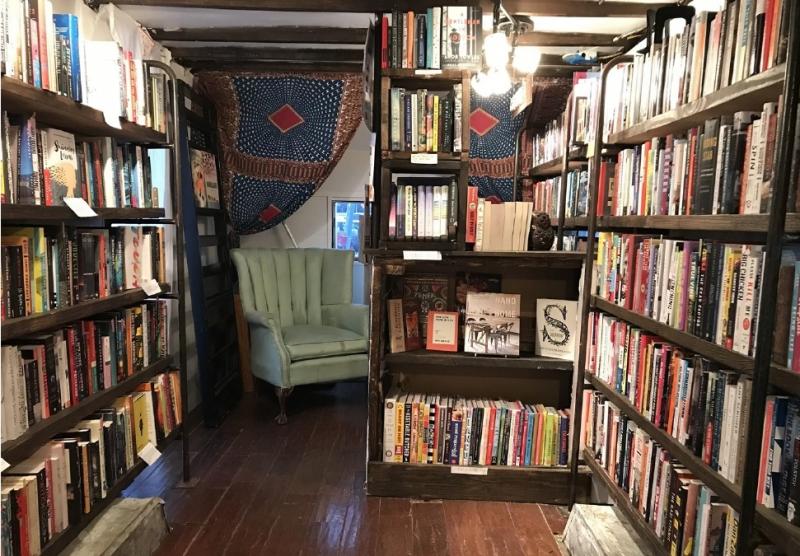 “We’ve really never been turned down wherever we have asked to park because we have something to offer these businesses,” added Thompson. “People have consistently had higher sales when we have parked there, so now we are at a point where people are coming to us and asking us to come their location.”

Since the store opened, Thompson and Turner have been making consistent improvements, including rebuilding the interior with higher quality wood, filling up their shelves with books the community wants to read, redoing the lights, repainting, waterproofing, and considering other adjustments and adaptations. For example, Thompson advised booksellers to think about accessibility, especially if your bookmobile, like theirs, doesn’t have ramps.

“If differently abled people want to come into our store they can’t, so we try to be very mindful that we are always looking out the door so we can help anyone who wants to come in,” she said. “We make sure we’re being very active about going outside and bringing the books out to them.”

Parnassus Books launched Parnassus on Wheels in March 2016, making real the longtime dream of Karen Hayes, who co-owns the store with author Ann Patchett. Since then, Grace Wright has handled all aspects of the bookmobile and is looking forward to starting the bookmobile’s third season.

The Parnassus bookmobile trailer is nicknamed “Pegasus,” or Peggy, after Parnassus on Wheels by Christopher Morley, the 1918 novella about a traveling bookstore driven by a steed named Pegasus. The bus also features a quote from the novella: “Books, the truest friend of man/Fill this rolling caravan.” Wright said they found a 28-year-old trailer in working order on eBay that had been a tri-county library bookmobile in South Georgia.

“We were really lucky to find it — it was already built out, and the shelves were already there, so we were very fortunate to have that interior set-up there for us,” said Wright. “It’s been wonderful so far. Obviously, we did a lot of interior and exterior renovations, but it was nice to already have that structure.”

The Parnassus on Wheels Bookmobile based in Nashville, Tennessee

Following the launch, Wright learned the best practices for operating a bookmobile through trial and error. For example, the bookshelves need to be tilted backward with books shelved spine-out, not face-out, so they don’t fly off the shelves: “We learned that the hard way,” she told booksellers. She also learned that their biggest expense would not be overhead costs like gas, but mechanical repairs, including a leaking power steering line and a failing engine, which cost about $10,000 to replace. Wright advised booksellers in the audience to “make friends with a good mechanic,” or become junior mechanics themselves.

“We worked with a company that works on semi-trucks and they sent a mechanic down with us to look at the bookmobile to make sure it was mechanically sound,” she said. “If anyone has owned old or used cars, when you invest in that, you really are investing in the extra cost for mechanical issues. There is nothing worse than having to call someone who was really excited and have to say, ‘Hey, I literally can’t get my bus there.’”

Wright also advised making the business’ social media links as noticeable as possible on the side of the bookmobile, in order to maximize the vehicle’s potential as a marketing tool. Wright told booksellers who want to launch a bookmobile as an extension of their store to think about how the venture will integrate with their existing business.

“When you are on the road you want to be an advertisement for yourself and what you’re doing,” said Wright. “The bus is great in its own right, but you can use it to promote your store every single way you can and every single moment of its life. It really will help you reach parts of the community that maybe your brick-and-mortar hasn’t, just because of location.” 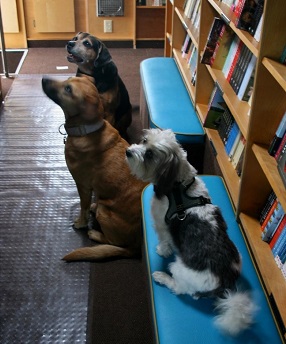 Interior of Parnassus on Wheels with three of the store's dogs

Wright said she has found that festivals and farmers’ markets make the best sales partners and sometimes even accept a story time or craft area in lieu of a set-up fee.

Wright also told booksellers to be aware of any parking permits or business licenses they might need for an event: Parnassus’ bookmobile license is tacked onto the store’s, while the Itinerant Literate’s will vary from town to town: some municipalities require an itinerant business license, while others require a temporary seller or event license.

The PowerPoint presentation from this education session is available here.