Wi13 Education: Emergency Preparedness and Resiliency for Your Business

Booksellers attending the “Emergency Preparedness and Resiliency for Your Business” panel at Winter Institute 13 in Memphis received helpful tips for preparing their business to withstand and recover from natural disasters, from hurricanes, wildfires, and floods to other unforeseen events. 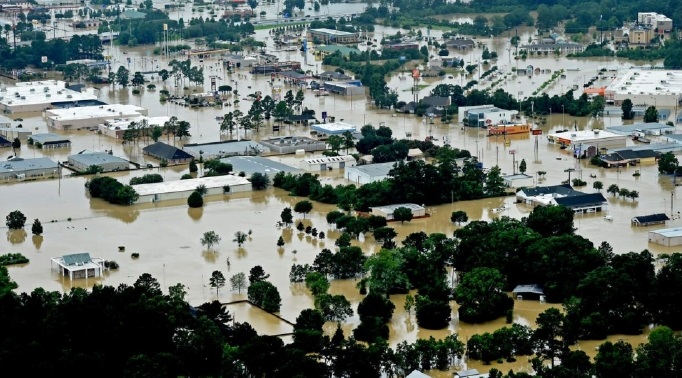 Much of the city of Denham Springs, Louisiana, was underwater after the catastrophic flood event of August 2016.

Much needed after the natural disaster-heavy year of 2017, the January 25 panel featured two booksellers who recently experienced disasters affecting their store and communities: the panel’s moderator, Valerie Koehler, owner of

Koehler said that while neither her store nor her home received major damage when Hurricane Harvey hit the Houston region last August, some of her employees’ homes did. This large-scale disaster, Koehler said, taught her the importance of being prepared with the requisite information, including where your store is geographically situated.

“There were a lot of people who didn’t know we had dams near us; they never even paid attention to the fact that we live on the coastal plains of Texas,” Koehler said. “That was my big takeaway: to understand where your shop and where your homes are located, and to understand what the potentials are to be prepared for in a natural disaster.”

Two years ago, the city of Denham Springs, Louisiana, was not at all prepared for the eventuality of a major disaster, Cavalier said. Over the course of four days in August 2016, the city was swamped with floodwaters that immersed 90 percent of the city’s structures, after a front from the north dumped 30 inches of rain on the area. Cavalier said that while his store did not experience damage during the 2016 flood, for which he is very grateful, his house and the warehouse for their book fair business did have flood damage.

From this unexpected disaster, Cavalier learned that “emergency preparedness and resiliency planning is not about having all the answers — it’s about gathering the right tools.” Unfortunately, he added, “Denham Springs didn’t have a cohesive emergency operations plan before the flood. There were plans for the city offices, the police, and the fire department, but not a unified one. No one was prepared for anything of this scale.”

After the floodwaters receded and recovery began, Cavalier got involved with the city on preparations for future disasters, serving as a volunteer on Denham Springs’ long-term recovery plan and natural disaster recovery framework.

When a disaster area is declared, FEMA steps in. FEMA agent Philip Strouse was part of ABA's emergency preparedness panel at Wi13.

“It’s difficult to wrap your mind around what to do and how to get ready,” Cavalier said. “It’s a daunting task, and the biggest point I want to get across is that you don’t have to get everything ready. You don’t have to have every answer to every question. You just need to get things together for your specific instance or your specific disaster that you’re prone to in your community. Try to put together a toolkit so that you can respond to whatever the situation may be.”

Cavalier’s key advice for booksellers and small business owners is to have a business emergency operations kit with emergency contact lists; a list of your accounts and customers; tax returns and insurance coverage information; photographs of your store; and the necessary backup discs for information. Booksellers should also learn about their local emergency plans and procedures, digitize and upload important documents to the Cloud, and share their store’s tailor-made disaster plan with staff and neighbors.

Booksellers should also consult their state and local Homeland Security and Emergency Services offices, which have great community-tailored plans specific to an area, as well as the Department of Homeland Security’s business-specific disaster preparedness website and the FEMA website, Cavalier said.

Philip Strouse, the FEMA liaison for the southeastern U.S., explained how important it is for small business owners to connect with their local governments so their interests are part of the conversation when it’s time to create a community preparedness plan.

“You want to be involved at the local level when the sky is blue, when emergency managers and local officials have time to listen to what small business communities’ interests are. You can learn how you can be involved, what the emergency plan is, what the flood zones are, so that you are in the group around the table to make decisions for the betterment of the community,” said Strouse.

Strouse also recommended that booksellers find out who their local emergency managers are, including their county flood manager: “Get to know them, see what the flood zones are, and then make sure you’re a part of that conversation. I know that for small business owners it’s hard based on your schedules, but if you can form a group, a network, that is key. That’s what it all comes back down to.”

Last year, Binc provided thousands of dollars in support for booksellers affected by the wildfires and mudslides in California and the devastation of Hurricanes Harvey, Irma, and Maria in Texas and the southeastern U.S. French, Binc’s executive director, told booksellers that the nonprofit helps booksellers in three ways: disaster relief assistance, under which for the first 72 hours after an event, Binc will mail American Express gift cards to be used for shelter, food, water, diapers, prescriptions, and other essential items. After those first 72 hours, Binc will help with disaster recovery assistance, including repairs to the home if not covered by insurance, the replacement of lost belongings not covered by insurance, help with relocation costs, and income replacement if a bookseller misses more than 50 percent of his or her shifts.

In 2017, Binc also began a pilot program to help bookstores with recovery from natural disasters, and so far, it has been very well-used, said French. This is the first time Binc has been able to assist booksellers at the store level, including for loss of income and for rent, mortgage, and utilities payments missed due to business disruption.

“We went through our entire budget between all the hurricanes and the wildfires, so the board of directors went back and doubled our budget this year,” said French. “While we’re not able to help with inventory replacement, we can help with the physicality of your store, especially if you’re not able to open.”

French said helping booksellers over the past year has taught her a lot about what people need most in the midst of a disaster. What comes up the most when she is talking to individuals, she said, is getting in touch with people.

“We highly recommend having a designated meeting place for your staff and also for your family,” French advised. “We’re typically talking to people sometimes within hours of an emergency, and a lot of the time that is top of mind: I don’t know where my staff is. I don’t know what my mom was doing today. It’s also important to have everybody’s name, phone number, and e-mail address in hardcopy and uploaded to the Cloud. Those are usually the biggest questions we get when someone is in the throes of an emergency.”

The PowerPoint presentation from the session, which contains additional resources for booksellers, is now available in the ABA Education Curriculum section on BookWeb.