Owners of small stores on the “Small Stores, Big Clout” panel at Winter Institute 2018 in Memphis demonstrated to attending booksellers some of the ways small stores can have an outsized impact on their communities and on the larger literary world. 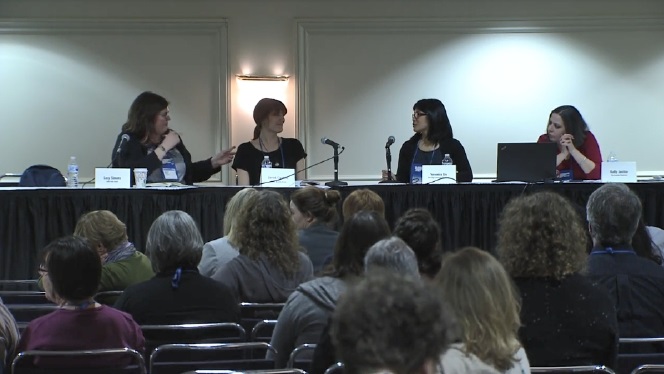 Geddis opened Avid’s 790-square-foot location in 2011, then later opened a 1,100 square-foot store only two miles away. She told booksellers she was unable to expand her first business due to physical space constraints and thought opening a new location would help make the business steadier and stronger.

“One of the challenges we had at my first store was that there was no storage and no back office, and while a lot of customers thought it was very quaint that we were receiving books right at the counter, it always frustrated me,” Geddis said.

Word Up Community Bookshop opened in 2011 as a pop-up shop. The community rallied behind the store, which then went on to receive extensions on its lease for a little over a year. Today, Word Up operates in a 1,100-square-foot space, with about 600 square feet of selling space and the rest serving as an art space and education center. It is run by a 60-person collective made up entirely of local residents who keep the space open seven days a week. Liu said the store was a 100 percent volunteer workforce until September 2017, when she became the store’s first paid employee.

“The fact that we’ve been able to exist this long still blows our minds. Our intention is to be around for a long time and to own our own building one day,” said Liu.

Justice has owned the 1,000-square-foot Fountain Bookstore since January 2008, at the start of the Great Recession. After years of trying to grow the 40-year-old bookstore within the medium-sized city of Richmond, she decided it was time to try a different, less community-centric approach that aimed for success on a larger scale.

“‘Why does Richmond have to be the only market?’ I thought. So I started thinking in terms of a bigger picture,” she said. “That’s the angle that I come from: top down rather than community up, because I already tried that approach and I couldn’t grow things organically within our town.”

Also founded in 2011, hello hello books is a 750-square-foot store selling new and used titles, but owner Simons said she sometimes wishes the store could be bigger. “We’re this size because we couldn’t afford more rent, but I wish we could expand more. If I had an extra 250 square feet I feel like I could take over the world,” said Simons.

But whether the panelists’ stores were small by design or small by necessity, they were each ready to share ways other small store owners can make the most of minimal space. According to Justice, other stores like hers should focus on making themselves visible to publishers and to the national media, especially if they are working with a top-down model as she is.

“I worked for years trying to get large talent to Richmond before we started getting big headliners,” she said. “One of the first was Tom Wolfe, and I made sure Fountain was associated with every press release that went out. This is one situation where [the concept of] ‘trickle-down’ actually works.”

“Once you’ve created that national story, your local media is forced to cover you,” she added. “Today, 15 percent of Fountain’s business is online, which is unheard of in the indie bookstore world,” but that, she said, is because she has worked aggressively to make Fountain a global brand.

Another thing booksellers can do is to look for mentors, not just among other booksellers and people they know, but also within the wider world; hers, she said, are Barbara Corcoran of the TV show Shark Tank, Oprah, Anthony Bourdain, and RuPaul, all of whom have strong brands and are super ambitious, but who are also humanitarians and decent people.

“I think this industry has a serious issue with navel-gazing and constantly thinking about the book business. You need to think about having a larger market and world view than just the bookstore,” said Justice.

For her part, Liu suggested to small stores that want the support of their communities to “go to community board meetings and make announcements about the new programs you have. We do that when we have anything where we want to let people into our process and into our journey.”

In addition, she said, there are many other ways the collective model of working can be adapted to the paid working environment. “Our customers are from the neighborhood and they want to make sure that we continue to exist,” said Liu. “Fifty percent are people of color; they are a self-selecting group of people who want to help their local bookstore, so it follows that lots of them are also connected to lots of other local organizations, and them having those connections out there has really helped us.”

Another initiative that has helped Word Up thrive as a small community store is starting a membership program. Their CSB, or Community Supported Bookstore, program is modeled after CSA (Community Supported Agriculture), where members pay upfront at the beginning of each season and collect their produce, or in this case their books, throughout that period. Liu said Word Up provides those in the program with six wooden nickels they can turn in for books, and also gives participants a free tote bag when they sign up. The program is also a helpful way to collect people’s information for mailing lists, she said.

At Avid, Geddis said that one of her biggest challenges has always been getting publishers to recognize the store as a viable business, and the number one way she has been able to accelerate that is by having her staff review books and post Indie Next List blurbs on Edelweiss.

“We wanted publishers to recognize us not only as a place to send authors, but as a place to generally send attention to,” she said, “so if your booksellers are already writing reviews and shelf-talkers, just use that same information to blast it nationwide.”

Geddis said it has also been important to educate publishers on Avid’s actual geographic location and to provide publishers with the names of other, non-competing stores nearby where their authors could stop.

The PowerPoint presentation from the session can be found here.