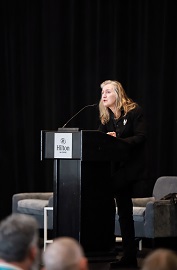 Rebecca Solnit during her keynote address.

On Thursday, January 23, Rebecca Solnit — the author of more than 20 critically acclaimed books, including her upcoming title, Recollections of My Nonexistence (Viking, March 2020) — appeared before independent booksellers at the American Booksellers Association’s 2020 Winter Institute for the afternoon keynote “A (Feminist) Field Guide to Nonexistence.”

Solnit began her talk by noting that bookstores, especially in today’s political climate, are “temples of resistance.” Said Solnit, “[You] take care of something grander than any of us — the collective imagination of the sense of history and possibility, of the depths of which empathy and understanding unfold.”

Part of what needs defending now is language itself, Solnit noted. “We’re not only fighting against certain principles, we’re fighting that words have meaning and that actions have meaning,” she said, referencing an Iranian student who was recently deported by ICE despite his case still being in court. “Language describes what we’ve written, who we’ve seen, where we’ve been, what happened, what the law is. There is a crisis of meaninglessness.”

Her upcoming book, Recollections of My Nonexistence, is about what it means to not have enough power, she said: “What it means when your words are taken from you, when they have no power, when they die in your mouth because no one will listen to you. Or they’ll punish you for speaking up. Or they won’t believe you. Or they will believe you, but it won’t matter because there will still be no consequences.”

Due to factors such as race, gender, sexual orientation, economic status, and immigration status, there are a number of people in the United States whose words don’t have enough power, she said, while there are others whose words have too much power. Said Solnit, “What I argue for in almost everything I’ve ever written is a democracy of voices in which everyone is heard.”

In Nonexistence, Solnit explores her time as a girl and woman living in daydreams, books, and revelries, but she noted she also explores the world “in grimmer ways as well.” Particularly, she said, “the threat of annihilation” of her voice, her writing, her freedom, her confidence, and her bodily integrity and survival.

“I wanted to describe how deeply it impacted me, how those particular kinds of nonexistence threatened to overwhelm me at a time when I was not only trying to make a life for myself as a young woman, but a voice for myself,” she said. “A voice that each of us needs to be a member of society, of any group, of a relationship, to tell their own story, to matter.”

Though her new book is indeed her story, Solnit added, it isn’t memoir in one crucial way. “We have mostly learned to tell our stories as personal stories — what happened happened specifically to me and can be remedied by me, by my escape, my overcoming, my healing, my reconciliation,” she said. “I chose to write a memoir that is in no small part about gender violence, although it’s centered on no single spectacular incident. I wanted to tell a different story.”

“There was no single thing that injured me and no single process of recovery because this violence is ambient,” she continued. “Because it looms as something that could happen, as well as something that does and did over and over. Because it affected my mother and grandmothers, my friends and acquaintances, and the dead women I read about almost every day, and that you probably read about because this stuff is in the news every day, mostly as dots that are not connected because we do not talk enough about the fact that this is an epidemic that has so deeply shaped the lives of women from India to Argentina to the United States. Because no woman is an island entirely to herself, and these injuries affected me because it could have been me. But not only because it could have been me, because it mattered to me even though it was them and not me. Because there’s evidence of a categorical hate that included me even when it was not me. And because it was pervasive, leaching into acts that were far from physical violence, but shared some of the annihilating, silencing goals.”

This violence is one manifestation of a broad, deep contempt for women that displays in many other ways, Solnit said, including the disregarding of voice, which “can be a matter of life and death.” This has layers of consequences, she added, ranging from mere annoyance to women being told in court that they are incapable of bearing witness.

“Part of what we’re trying to do in books is to turn people into readers and listeners, into people who pay attention to other voices, other experiences, other perspectives,” said Solnit, noting that she has written before about dismantling the literary canon dominated by white cisgender male authors.

“I believe that feminism is a project to liberate everybody, and it’s inseparable from the queer liberation that is also about breaking us out of our gender roles,” Solnit added. “There are books that confirm and confine the reader’s identity, that make white people whiter and straight people straighter and men more inclined to stick with their own point of view. But at their best, books invite us to be other kinds of beings in other times and places and circumstances, or to be the things we already are but in some deeper, more implicated, complicated way that we may not have thought about yet.”

Solnit concluded her keynote by noting that booksellers are responsible for the diversity that exists in the book industry right now as well as the profound impact it has on readers around the country. “You all are why people can buy these books,” she said. “It’s not Amazon. It’s not the chains. It’s independents deciding this is what’s going next to the cash register, this is what’s going on the table, this is what we’re going to hand to readers who come in unsure of what they want.”