Karen Kilgariff and Georgia Hardstark, hosts of the hit true crime/comedy podcast My Favorite Murder, took the stage for a large audience of booksellers at the lively “Mariachi & Murder” grand finale at Winter Institute 14. 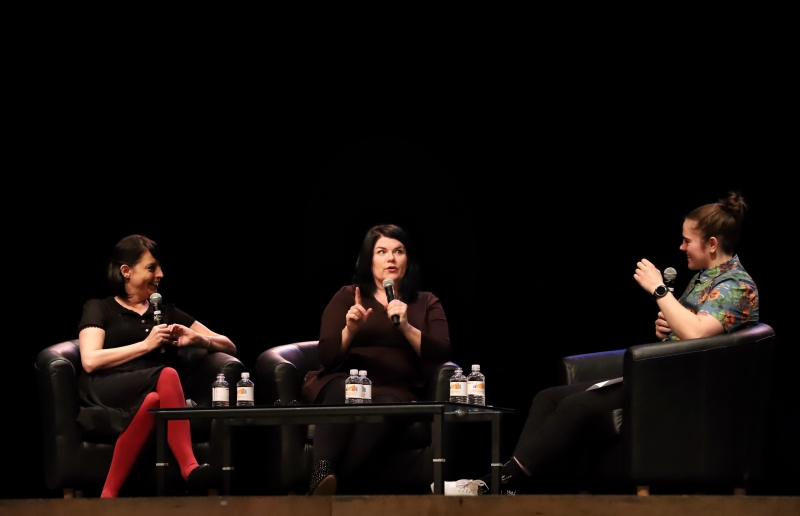 The finale, which took place on Friday, January 25, in the Kiva Auditorium at the Albuquerque Convention Center, also featured a performance from Mariachi Buenaventura, a mariachi ensemble from Santa Fe. Before bringing the guests of honor up on stage for an interview, Kelsy April, manager at Savoy Bookshop and Café in Westerly, Rhode Island, described discovering My Favorite Murder for the first time. Said April, “I was obsessed with how these two badass ladies who co-hosted the show managed to talk about true crime in a way that made it feel a little bit less taboo — that it was ok to talk about something that might make you feel vulnerable, but in the end can relieve some of your own anxieties.”

Kilgariff and Hardstark are the authors of the upcoming Stay Sexy and Don’t Get Murdered: The Definitive How-To Guide (Forge Books, May 28), which is being marketed as a “dual memoir/humor/advice book” and was chosen by a committee of booksellers as a Winter/Spring 2019 Indies Introduce debut selection. “Where the hell am I supposed to put that in the store?” joked April, to kick off the conversation. “Right in the front, baby!” Kilgariff responded.

Each week on the podcast, which launched in 2016, Kilgariff and Hardstark discuss true crime cases with a sense of humor and insight that have earned them a cult-like fan base and 19 million downloads a month; fans of the podcast are called “murderinos.” 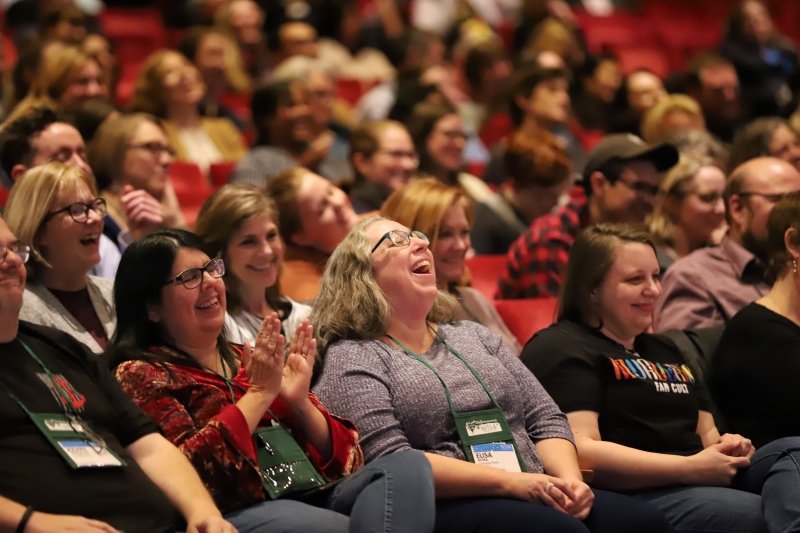 As the final event of Winter Institute 14, attendees heard from Hardstark and Kilgariff, hosts of the popular "My Favorite Murder" podcast.

Kilgariff and Hardstark each previously had their own comedy podcasts and have loved and been involved with the medium. As a performer, Kilgariff has appeared on TV programs like Mr. Show, The Book Group, and Conan and was the head writer for the first five years of The Ellen DeGeneres Show. She then wrote for shows like Other Space, Portlandia, and Baskets. Her musical comedy album Live at the Bootleg was included in Vulture’s Top 9 of 2014 and in Stitcher’s Top 11 of 2014. Hardstark is a food writer and Cooking Channel on-camera personality; she co-hosted the travel/adventure/party show Tripping Out With Alie & Georgia and regularly appeared on the Cooking Channel’s Unique Sweets. She is also a frequent guest narrator on Comedy Central’s hit show Drunk History.

Kilgariff told the audience that what makes their show different is that, while most true crime podcasts and other media are made by professional journalists who know how to write news stories or TV pieces, she and Hardstark are actual consumers of true crime, just like their audience.

“We basically present it in the way that people actually consume it… You’re watching Forensic Files and you freak out, you text your friend, and say, oh my god, can you believe it?” said Kilgariff. “It’s much more like we’re the observer and sharing with all the other people who love true crime media, saying, can you believe we just saw that? So it’s a little different. And, of course, the comedy comes because that’s just how Georgia and I talk to each other.”

“It’s the same way that a lot of people do podcasts that are reviews of TV shows, like The Bachelor,” said Hardstark, which consist of people talking and gossiping about the shows with their friends. “You can have that conversation at any party, but then with true crime that is not the case. You’re risking being a weirdo if you bring it up, and so the minute we found out we were both into it and we started a podcast about it, we found out that there are so many others, mostly women, who are not able to discuss it with anyone either and are actually really interested. So it’s really cool.” 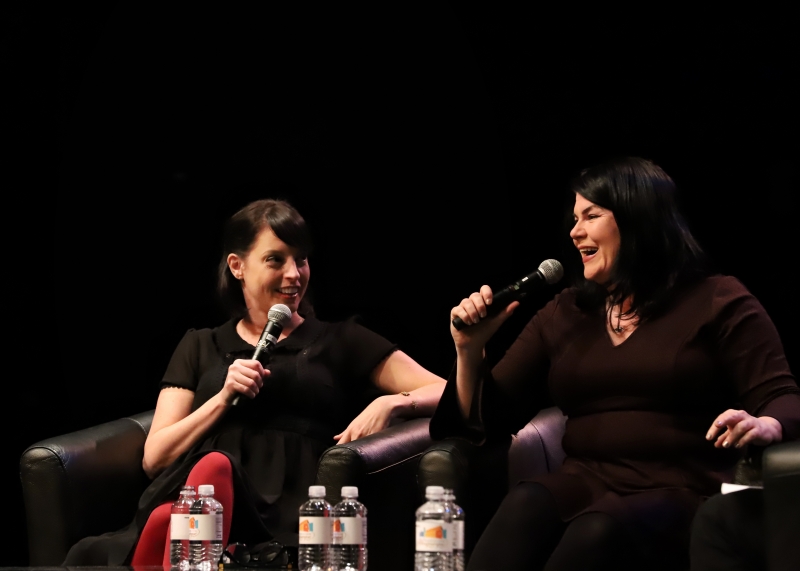 Hardstark and Kilgariff chat about their successful true crime/comedy podcast and upcoming book.

April continued by praising Kilgariff and Hardstark for their compassionate work on the show: avoiding victim-blaming, raising money for victims’ organizations, and normalizing the prioritization of mental health. She also commended the hosts for creating a wide-ranging interactive community of fans who communicate with one another and with the hosts, perpetuating an ever-growing group of compassionate, curious women. Being an independent bookseller, said April, is also about making connections within a community of consumers.

“We realized pretty quickly that if you get stopped and someone is a listener, it’s usually some girl who you could be friends with, who you could hang out with,” Hardstark said. “It’s been this really cool thing of meeting all these like-minded women; it’s a lot of people who are so similar to us, so when they say I feel like I know you, it’s like, well, you do because I speak to you as exactly who I am.”

“In my hometown, our indie bookseller is Copperfield’s Books,” said Kilgariff, “and I remember being 12 and going into the true crime section and it was like I was in the adult book section. Looking through and seeing the different stories in there, there was this feeling of taboo, that I shouldn’t be there, that that’s not for me. I think that’s one of the experiences that people have with this podcast, and hopefully with the book, where you discover that you get to like whatever you want and that there are lots of other people who like that same thing.”

Just like them, said Kilgariff and Hardstark, My Favorite Murder listeners are intrigued by the often very-human narratives behind the violent murderers and bloody tragedies they study, from famous serial killers like John Wayne Gacy, Ted Bundy, and Richard Ramirez to lesser-known figures like Israel Keyes.

Many booksellers in the audience were excited to see the hosts of "My Favorite Murder."

Finally, April asked the hosts what it was like to transition from working on a podcast to writing a book; as it turns out, not so easy. “Guys, it’s so hard to write a book,” Hardstark said. “Since I was in high school I was like, I want to write a book someday, and then it happened, and I was like, oh shit, I have to write a book.”

To wrap up the finale, Hardstark told booksellers that one of her favorite party questions to get to know someone has always been to ask: What’s that crazy thing that happened in your town? Everyone has one, she said. When they first started the podcast, Hardstark and Kilgariff asked listeners to send in their hometown murder stories, something that has since become a weekly episode in which the hosts read people’s stories out loud. In honor of that show tradition, April recounted a murder that happened years ago in her hometown of Mystic, Connecticut.

Booksellers can look to upcoming issues of Bookselling This Week for more coverage of Winter Institute 14 in the coming weeks.