Whether or not the groundhog sees his shadow on Friday, Arlene Lynes expects to see plenty of sales at her bookstore, located in the center of one of the country’s biggest Groundhog Day celebrations.

Read Between the Lynes is right on the village square in Woodstock, Illinois, the filming location for the enduringly popular 1993 movie Groundhog Day. 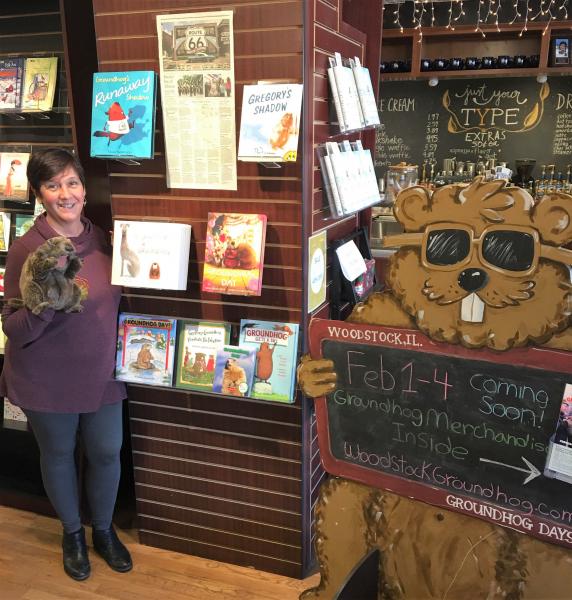 Between 3,000 and 5,000 visitors are expected to arrive in town beginning February 1 for the annual Groundhog Days weekend, which includes weather predictions from the town’s own groundhog, “Woodstock Willie,” at 7:07 a.m. on Friday.

“Our sales on Groundhog Days weekend rival the second to last Saturday before Christmas,” Lynes told Bookselling This Week. “It’s probably my number-two weekend of the year.”

In the movie, Woodstock stands in for Punxsutawney, Pennsylvania, the original home of groundhog weather prognostication beginning in the 1880s.

The filmmakers choose Woodstock for its historic square, Victorian architecture, and charming atmosphere. Director Harold Ramis was also a native of nearby Chicago, and star Bill Murray grew up in Wilmette, Illinois, just an hour away from Woodstock.

This year marks the 25th anniversary of Groundhog Day, which was added to the National Film Registry in 2006 as a “culturally, historically, or aesthetically significant” movie.

The tale of an abrasive TV weatherman who must relive the same day again and again until he learns to be a better person has become so revered that tourists flock all year long to Woodstock to see famous sights from the movie.

“People come from all over the world,” Lynes said. “We have met people from Australia, Spain, Germany, and even one summer had a young couple come through from Moscow, Russia. They were visiting the United States, and Chicago was one of their stops, but they came out here specifically because it’s where the movie was filmed.”

The Chicago Tribune listed Woodstock’s Groundhog Days weekend as its number-one pick on its “bicentennial bucket list” of events not to miss during the 200th year of Illinois’ statehood, which Lynes hopes will bring even more tourists than usual to the village.

“There’s been a tremendous amount of press,” she said, including reports in recent days by ABC7 News and WGN Radio out of Chicago.

Lynes moved to Woodstock in 1997 and opened her bookstore in 2005. She said the location was empty when the movie was shot in 1992, and filmmakers used it as a green room, break room, and storage area. 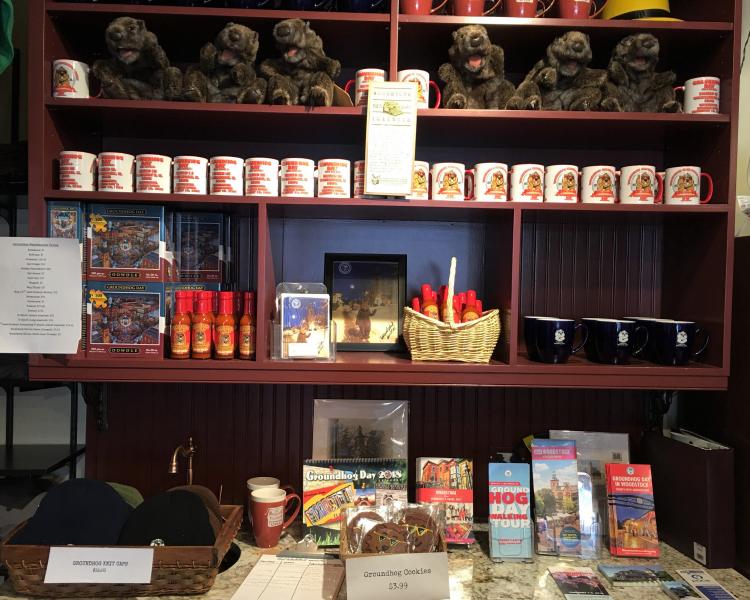 Woodstock’s visitors’ center inside the bookstore is ready for Groundhog Day.

Today, the 2,800-square-foot bookstore hosts the official Woodstock visitors’ center at a counter that displays plush groundhogs and related merchandise, which means that all the tourists coming to the area usually find their way to Read Between the Lynes.

Lynes is waiting for them with a wide array of groundhog-themed merchandise and every children’s book on Groundhog Day she can find. “My sales reps crack up when it comes time to present the children’s lines because I always ask if there’s anything new with a groundhog,” Lynes said.

This year, she ordered 40 copies of the newly published Groundhug Day, written by Anne Marie Pace and illustrated by Christopher Denise (Disney-Hyperion), a children’s tale that combines the Groundhog Day and Valentine’s Day holidays. 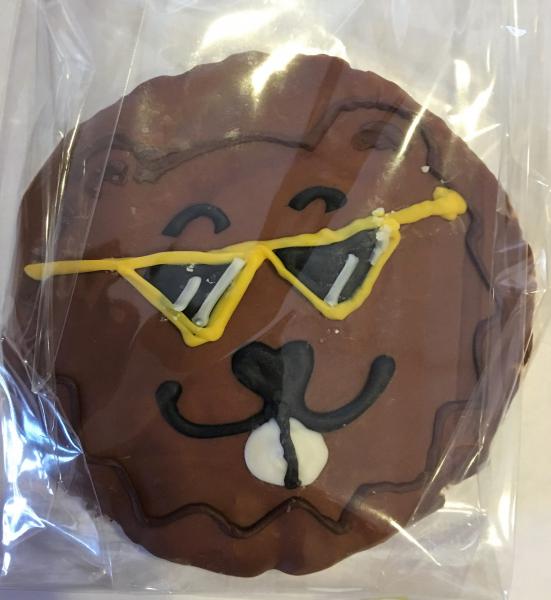 Customers stop into the bookstore for hot drinks and groundhog cookies.

The bookstore’s café will be busy on Friday morning, in particular, as visitors stop in for groundhog-themed cookies, coffee, and cocoa on their way to the square to discover what Woodstock Willie predicts for the length of the season. In the air all weekend long will be the sounds of the film’s soundtrack broadcast from the gazebo featured in the movie.

“When you walk onto the square, it’s like walking onto a movie set,” Lynes said. “The music is playing, and it transports people to a different place and takes them out of their everyday life.”

As for her own relationship with the movie, it started out rocky because she fell asleep the first time she saw it on video as a tired young mother of three. “I moved here, found out the history, and re-rented it and became a convert,” she said. “It’s very fun to watch it and see your town and all the places in it.”