Our Daily Nada to Open in Missouri 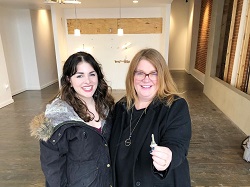 Amy Covitz and Andrea Baca will open Our Daily Nada bookstore and bar in the River Market neighborhood of Kansas City, Missouri, this June, reported the Kansas City Star.

The bookstore will offer locally roasted coffee, wines, and small plates, soups, and sandwiches. Events will include book clubs and open mic nights.

Covitz and Baca worked together at a law firm, but Covitz, whose husband owns a local men’s clothing shop, said she had always wanted to open a bookstore with a bar.

Oak Park, Illinois’ The Book Table will celebrate its 15th anniversary this summer by taking over its original location next door. The space, which has just become available again, will grow the store by 50 percent, from 5,600 square feet to 7,900.

“Our shelves are crowded, the piles are overflowing. And on top of that, we have an enormous backlog of really cool inventory that has nowhere to go. In particular, we have had the opportunity over the last few years to buy some great libraries of art and rare books, but very little of that has been able to make its way into our stock,” owners Jason Smith and Rachel Weaver wrote on their Indiegogo page, adding that they’ve grown new book inventory since the closure of Borders and also plan to bring back used and discounted books.

The owners launched the campaign to help raise money for the expansion, citing the upcoming repaving of the store’s street as a concern that may dampen business. “While this may not be the ideal time to expand the store, we are also keenly aware that we may not have this opportunity again,” they wrote.

Simonds had announced that the bookstore would close its doors if a new owner wasn’t found by March 31; the accepted offer came from local but as-yet-unnamed residents, pending finalization of the sale.

“We were overwhelmed by the response,” said Simonds. He and his wife, co-owner Diane, received more than 20 calls from people interested in buying the store. “We fairly quickly focused on the party that we did because of what they brought to the table, including retail experience.”

Literati Celebrates Anniversary, Publication of Notes From a Public Typewriter 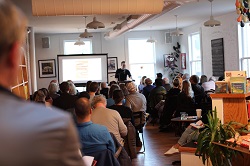 Over the weekend, Literati Bookstore in Ann Arbor, Michigan, celebrated its five-year anniversary as well as the launch of Notes From a Public Typewriter (Grand Central Publishing), a book about the anonymous notes left in the bookstore’s typewriter.

During a launch event on March 30, owner Michael Gustafson and co-editor and designer Oliver Uberti talked about how the book came together. The weekend continued with current and former Literati booksellers reading original work, plus offerings of cake, treats, and more.

Owners Janis Segress, Judy de Jonge, and her husband, Krijn, opened the store in 2013, several months after the closure of Queen Anne Books.

“We feel very vested in the Queen Anne community and very vested in wanting to help our community businesses stay alive, to just keep this downtown core alive,” said Segress. “And the three of us feel very passionate that a literary meeting spot is one of the most instrumental for that purpose.”

The Booksmith Joins Forces With Two Sisters Bar and Books

The Alembic, a bar and restaurant in San Francisco’s Haight-Ashbury neighborhood, has closed for renovations under the oversight of Christin Evans, owner of The Booksmith, and Mikha Diaz of Two Sisters, who are taking over the restaurant.

The restaurant, which will reopen in May, will continue to offer craft cocktails, beer, wine, coffee, and tea, as well as a menu featuring seasonal foods.

“Christin and I view this as a legacy business,” Diaz told Eater San Francisco. “It’s one of those businesses that can have different owners but it’s fundamentally its own self — we’re not going in to dramatically change it; we’re going in to revive its best traditions.”

Olson was a supporter of Frazier, a former Raleigh resident, before Cold Mountain, the newspaper reported. “When Cold Mountain was about to be published, she was so helpful to me in so many ways, including telling me how to do a bookstore event,” said Frazier. “I had never done one before. She offered all kinds of bits of advice, things to do and not to do.”

Quail Ridge Books sold 6,000 copies of Cold Mountain, including 1,200 at Frazier’s reading. He’ll be revisiting Quail Ridge on April 17 while on tour for Varina.