The Next Chapter in Omaha, Nebraska, is now open. 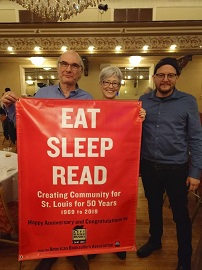 Downbound Books is now open in Cincinnati, Ohio. The store was also featured in an article called “New Northside bookstore won’t have something for everyone, but perhaps ‘everything for someone.’”

Breakwater Books in Guilford, Connecticut, is under new ownership.

Mary and Alix Bernard, owners of Joe’s Place in Greenville, South Carolina, will be putting the bookstore up for sale to focus on their retirement.

Books of Wonder in New York City will be moving to a new location in the Flatiron District. The store has set up a GoFundMe with more information on the move.

Jojo Goerner, owner of the Moosterious Emporium in Haines, Alaska, will be closing her bookstore at the end of November; Amy Kane plans to open a new bookstore in its location.

Raven Book Store in Lawrence, Kansas, published a zine called How to Resist Amazon & Why.

WORD bookstores in Brooklyn and Jersey City have launched a series of short videos on Instagram called ARC Raiders!

The Oklahoman featured Best of Books in Edmond for its events series.

Roundabout Books in Bend, Oregon, held a book drive in support of NeighborImpact Head Start. The store is also celebrating its third anniversary.

A number of ABA member stores made the list of best bookstores in Los Angeles.