Indie booksellers across the country have chosen B.B. Alston’s Amari and the Night Brothers (Balzer + Bray) as one of their top picks for the Winter 2020-2021 Kids’ Indie Next List. 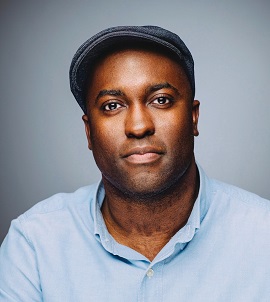 Thirteen-year-old Amari Peters is grappling with her older brother Quinton’s mysterious disappearance when she finds something unbelievable — a ticking briefcase in her brother’s old closet, meant for her eyes only. She soon discovers the existence of a supernatural world filled with magicians, mermaids, and dwarves. And that Quinton’s left her a nomination for a summer tryout at the secretive Bureau of Supernatural Affairs. And that she has magical powers of her own.

To earn her spot as a Junior Agent at the Bureau, Amari must compete against some of the nation’s wealthiest children, and she doesn’t know if she can do it. But if she doesn’t, she might never find out what happened to Quinton.

“What a breath of fresh air!” said Colleen Ross of Books Inc. in San Francisco, California. “This absorbing new middle reader takes you on the kind of exhilarating adventure as only you would find when stepping through the wardrobe to Narnia. With a whole lot of heart — and some guts to boot — in this book, you might well find yourself cheering (with wild abandon) alongside the ever-so-plucky antagonist, Amari, whose spirit shines brighter than any magic wand would. This might easily become the next big #BlackGirlMagic series of the year!”

B.B. Alston: I’m a big fan of the movie Men in Black and one day I just wondered, what if it wasn’t just aliens that lived among us, but all of the things we believe to be myths and legends? From leprechauns to werewolves, and even the Abominable Snowman! What kind of agency would handle that and what would it look like? How would it work? And that’s the basis for how I got started building the world in the story. 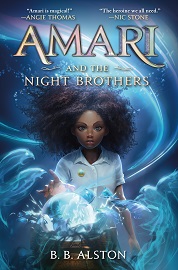 It was while exploring that question that I got the idea for Amari: What if a kid like I was (Black and from modest means) got to go to Hogwarts or Camp Half-Blood? And maybe each kid gets their own unique supernatural ability to better fit into this hidden supernatural world? And Amari popped into my head fully formed, with her brown skin and big curly afro.

BTW: How did you develop the character of Amari Peters from there?

BBA: Amari is based on me and the kids I grew up with. Many of us were kids that didn’t have a lot in terms of money and so I tried to craft Amari around that reality. A lot of her strengths (her determination) and weaknesses (self-confidence) are things that I’ve seen in so many of us who have come from those circumstances — the willpower to want better for yourself even while society often times says that you aren’t worthy of better.

BTW: The supernatural world, as well as the summer camp Bureau of Supernatural Affairs, blends magic with technology in really interesting ways. How did you come up with the magic for this world?

BBA: So much of it was just me daydreaming about how a mysterious supernatural agency might operate and really just letting my imagination run wild. You’d need magic, because supernatural creatures are magical but humans would contribute too, and that comes in the form of really advanced technology. So because the Bureau is where the known world and supernatural world meet, you have a meeting of both technology and magic as well.

BTW: Children are eligible to try out for camp at 12. Is this age significant to you?

BBA: I think the 12-13 age range is really important because it’s around that age that kids start to form their own opinions about themselves and the world independent of their parents’ beliefs. Sure, parents will undoubtedly have a tremendous impact on their children’s beliefs, but this is the time when kids start to evaluate which things they accept and which they don’t. And so, in terms of the story, this is the perfect time to expose them to a hidden world because it essentially means reevaluating your perception of the world. Something they’ll have begun to do anyway.

BBA: I think when deciding to write about a Black character, it’s important to do as best you can to accurately represent what that character feels and experiences. And so Amari being a poor Black kid makes her someone society stereotypes negatively. I wanted to show how those stereotypes can become so prevalent that you not only expect to be treated badly/differently, you start to believe you deserve it too. Amari’s emotional journey in the story is finding the inner strength to accept and love herself for who she is. I think that’s a really important message for all readers.

BTW: At camp, Amari meets Elsie, who helps her adjust. While the two are different, they bond over being deemed outcasts and develop a strong friendship. How did you craft their dynamic?

BBA: While it was important for me to portray what it’s like to not fit in, I thought it was just as important to show that kids have the power to reach out to other kids who don’t fit in. And you don’t have to necessarily fit in yourself to do that. So much of their bond and friendship is simple acceptance and a commitment to be there for one another.

BBA: Kindness. The world is so divided today, and people are so quick to otherize those who might look different, think differently, or feel differently. I hope readers see through Amari eyes what it’s like to be shunned and otherized based on things she can’t change about herself, whether it’s her race, financial status, or having a “bad” supernatural ability. I hope that readers see that when Amari stumbles, others are there to help pick her up again. I want readers to see that they have the ability to be that person in the scenario as well.

I also hope readers learn to be kind to themselves. Especially those who don’t fit in because they are most at risk from self-hatred and neglect. No matter what the reason for your feeling like you don’t belong, there is so much strength and joy to be found in accepting yourself for who you are.

BBA: I love indie bookstores! Some of my earliest memories are visiting indie bookstores with my mom and sitting on the floor with books I’d just found. We’d go hunting for old Star Trek books and I can remember the sheer joy we’d get from finding one we hadn’t read before.

I still make it a point to visit the indie bookstores in the area whenever I’m traveling. I’ve found that the biggest and most passionate story lovers operate those places and they give you a warmth and a coziness that you just can’t find anywhere else. Indie bookstores mean the world to me.