When it came to the cover of the galley for The Mirror Thief by debut author Martin Seay, independent publisher Melville House went in an unusual direction: an ARC completely covered in bookseller blurbs. 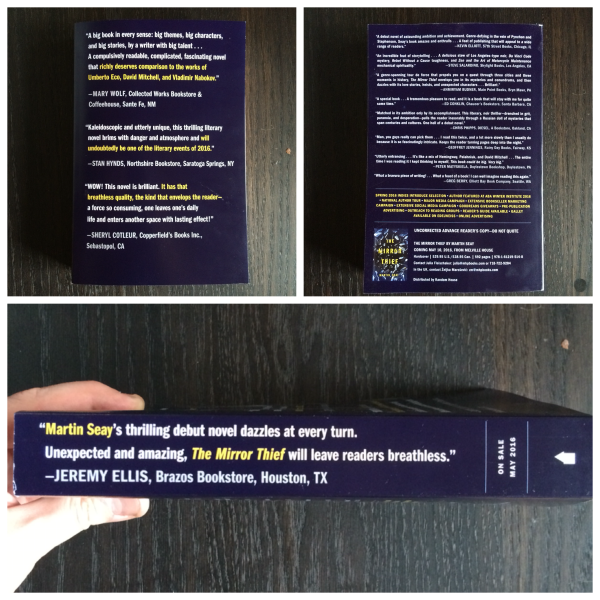 The 588-page galley for the May 2016 title is part of a one-of-a-kind marketing program inspired by indie booksellers, said Melville House publisher and co-founder Dennis Johnson.

“We are really banking on indies being a wind behind the sails of this book and becoming its champions as much as we are,” he said. “We hope that as the buzz builds in the indie bookseller world it will spread out into the rest of the retail market and to the media as well.”

The book, which was chosen by a panel of booksellers for the Winter/Spring 2016 Indies Introduce promotion, spans from 16th century Venice, to 1950s Venice Beach, to The Venetian casino in modern-day Las Vegas.

“I really believe in this book. I thought it was one of the most incredible books to cross my desk in a long time,” Johnson said. “It’s just amazing that this is a first-time writer. It’s a hugely entertaining saga but it’s got some very suspenseful elements to it and the prose is absolutely delicious. It’s an absorbing, cinematic book, kind of like David Mitchell’s Cloud Atlas.”

But knowing that a debut writer and an extra-long book can be a hard sell to readers, Johnson decided to send the book’s 700-page manuscript out to about 75 booksellers to see what they thought.

Melville House received so many enthusiastic responses that Johnson decided to use 12 of the bookseller blurbs on the galley (including one on the spine) as the only marketing copy. The next step, he said, is to bring Seay to Winter Institute 11 in January, where he will meet some of his bookseller champions and, hopefully, find more who will enthusiastically hand-sell The Mirror Thief to customers.

“We’ve always felt like we make books to be sold in indie bookstores; obviously we hope they sell other places, but we have a real recognition of where the people we are publishing for shop,” Johnson said. “This campaign is really geared around the whole concept that this book will live or die [in indie bookstores].”

Johnson said he expects Melville House to do a second printing of the galley soon, which may include a new set of bookseller quotes.