How We Sell Backlist: Scuppernong Books 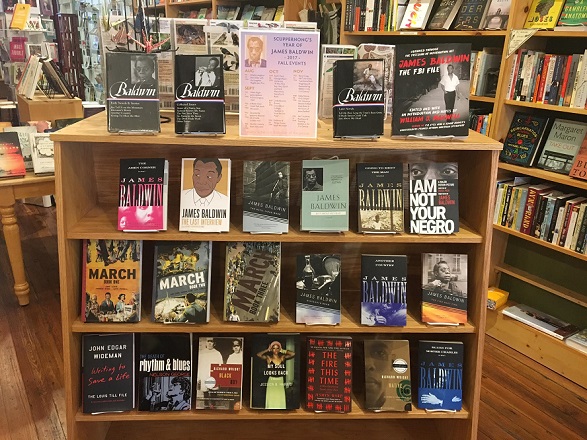 Scuppernong Books is the subject of Bookselling This Week’s third “How We Sell Backlist” column, a new occasional series highlighting ABA’s campaign to promote backlist titles. This series, which explores how ABA member booksellers are successfully selling, promoting, and displaying backlist books, has previously covered Seattle’s

In Greensboro, North Carolina, Scuppernong Books’ third annual “Year of the Author” program has sold more than 200 copies of James Baldwin’s books, the most successful program yet, said Steve Mitchell, who co-owns the store with Brian Lampkin and Kira Larson.

By November 2017, the store will have presented 26 events focusing on the life and work of Baldwin, with 12 events in the spring and 14 in the fall. The program was inspired by a customer who mentioned a Melville-themed bar hop in New York City (which involved participants reading sections of Moby Dick) and was planned with help from 20 members of the local community. “Year of the Author” has since helped sell two classic authors’ backlist titles, in addition to Baldwin; the Year of Herman Melville in 2015 and the Year of Flannery O’Connor in 2016 each led to sales of about 20 to 30 copies of these authors’ books.

Mitchell told BTW that the store decided last year on Baldwin as an author who could help encourage a discussion already taking place in Greensboro about policing and the black community; the subsequent release of the film I Am Not Your Negro brought the conversation about Baldwin’s work to a larger public arena, Mitchell said.

“We have a set display that has been up all year of Baldwin books, and we pretty much have everything available of his that’s in print,” said Mitchell. “Our events have included lectures and book discussions and table reads of his plays and a poetry discussion. We’ve got people coming in from all over, including professors from local universities, to give talks, so we are really covering, either tangentially or very specifically, most of his books.”

In addition to the display, said Mitchell, one of the store’s front windows has been devoted to quotes from Baldwin as well as a Civil Rights timeline since the ’30s, “so Baldwin is kind of ever-present at the store at the moment.”

Mitchell said the Year of James Baldwin program has also prompted higher sales of other black intellectual and revolutionary writers and books. “We have the graphic novel series March included in the display; we have Richard Wright and Ralph Ellison, but we also have Ta-Nehisi Coates as well as a number of other contemporary black authors who are writing in the same kind of field,” said Mitchell.

One obvious way stores can promote backlist in general is to face out backlist titles and not just face out new books, Mitchell said. “Occasionally, we’ll do a display of short story collections and all of those short stories will not be just new books — it will be backlist as well,” said Mitchell. “That’s true for most any display we do, whether it’s seasonal cooking, books on urban planning…we’re always going to mix in some backlist with current books.”

“We’ve also done a couple of these three-minute YouTube videos where two of our staff members will talk about five books that they think are cool, and most of the time these have included both backlist and new books,” said Mitchell. “I think part of it is just not to forget about your backlist, to remember that it’s a really great asset and that people can be really interested in books that aren’t just the current thing.”

“I think this is another thing that keeps our backlist vibrant: that a good amount are not the books you’re going to be able to find in other bookstores, not that they are so obscure, just that they are not the things that the big box stores are necessarily going to carry, and they are not the things that there are going to be 12 copies of at every bookstore you go to,” he said. “People who come in are often excited to find the backlist books that are in our collection.”