Indie booksellers across the country have chosen Laura E. Weymouth’s The Light Between Worlds (HarperTeen) as one of their top picks for the Fall 2018 Kids’ Indie Next List.

Weymouth’s debut tells the story three siblings who are transported from London circa 1949 to a fantastical realm called the Woodlands, where they live for years. Upon their return to London, nothing has changed except for themselves, and the siblings are forced to find a sense of normalcy in their old lives. At its heart, The Light Between Worlds is a story of self-discovery, sisterhood, and what it means to belong.

“Laura Weymouth’s debut is a captivating tale of two sisters struggling to find home and to find themselves,” said Hannah Wilson of Out West Books in Grand Junction, Colorado. “The younger, Evelyn, longs for the days when she and her sister and brother lived in the Woodlands, a mystical, Narnia-like land Weymouth paints with beautiful lyricism. Evelyn has carried the weight of her longing since she and her siblings returned to post-WWII England. When Evelyn goes missing, Philippa carries the loss of her sister, as well as the pain of her own choices. They embark on their own journeys of healing and belonging, each searching for what they’ve lost and where they belong. Written with meaning, feeling, and depth, The Light Between Worlds is a stunning debut.”

Bookselling This Week: Where did the idea for this book originate?

Laura E. Weymouth: Strangely enough, on Twitter! I saw someone in the publishing community say they’d love to read a story about Susan Pevensie post-Narnia. “I’d love to read that too,” I thought to myself, and went on my merry way. A few months later, the same request appeared, and the concept had never really left my mind in the interim. I knew I had to be the one to write it, and drafted the book in an absolute panic that someone would tell that story before I did. Along the way, of course, it grew and changed and became an entity unto itself, but the central premise of “how do you readjust to life in our world after spending time in another” is still what the book hinges on.

BTW: How did you craft the characters of Philippa, Jamie, and Evelyn?

LW: Well, I’ve always loved the tension between Lucy and Susan’s approaches to Narnia in Lewis’ books — they have drastically different perspectives on their magical adventures, and that’s never really explored. It’s just sort of mentioned in passing. I wanted to write a book where the differing experiences of two sisters, both during a magical adventure and throughout its aftermath, was the central story, rather than an aside. Evelyn’s not exactly a stand-in for Lucy — she’s a lot more introverted and unsure of herself, I think, but she fills the role of the sister who wholeheartedly embraces the Woodlands, and as a result has a hard time functioning in our world once she comes back. There’s a lot of my teenage self in Evelyn — I think most teens experience and understand her sense of disconnect, of being out of time and out of place. 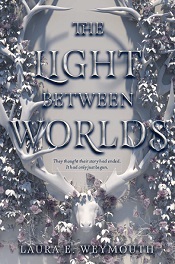 Philippa is a bit more obviously a reference to Susan Pevensie — I allowed myself a few lines that rebut Lewis’ statement that Susan had become very silly in the wake of her Narnian adventures, and only thought about lipstick and nylons and boys. For Phil, a carefully-managed, artfully presented exterior is a way of protecting herself from the difficulties of life, whether she’s living it in our world or another. She’s very polished, very hard on the outside, whereas Evelyn wears her emotions on her sleeve. But when it really comes down to it, Ev is the one with a steel-like resolve at her core, and Phil is the bleeding heart.

And last but not least is Jamie, who presents a more moderate response to Ev and Phil’s very polarized experiences of life in our world versus life in the Woodlands. Certainly, Jamie has his own trials, but he’s better able to compartmentalize and adjust than his sisters and makes his way well enough in both places. A lot of that has to do with the fact that he maintains a greater degree of separation, rather than becoming fully involved with his sisters’ struggles. There’s a message in there about emotional labor, and how the work of nurturing and restoration and maintaining vital connections so disproportionately falls upon women and girls.

BTW: This book deals with World War II England. What was your research process for this aspect of the book?

LW: I was a history major in college (medieval and Renaissance history, in particular) so I LOVE the research end of writing historical fiction. I did whatever I could to immerse myself in the world the Hapwell children live in — for instance, while writing the scene where they’re called to the Woodlands during an air raid, I listened to audio recordings of actual London air raids so as to accurately describe what the Hapwells would have been hearing. The most fiddly aspect of research was rationing — finding out what was rationed when, for how long, and to what extent.

But the biggest challenge was recreating London’s National Gallery circa 1951. Fortunately, the Gallery has extensive archives and a lot of wonderful resources on its fascinating history, so I was able to watch video footage and look at old photographs of the various rooms just after the war, and I was provided with a floor plan from the 1950s by a very helpful archivist. It took a lot of background work to bring everything together, but it was intriguing and I love the feeling of knowing my work is as accurate as I can make it!

BTW: Both poetry and art are important to the characters in this book. How did you decide which poems and paintings to include?

LW: I’ve been a poetry reader since middle school and really love the work of Emily Dickinson and Sara Teasdale, so it felt quite natural to give that enjoyment to Evelyn. Georgie, Ev’s roommate, and Max, her literature professor, share their favorite black women poets with Evelyn, which introduced me to the wonderful work of Frances Harper and Georgia Douglas Johnson. And as far as paintings go, some of those are favorites as well — I love the pre-Raphaelites, so The Lady of Shalott and Ophelia came to mind at once. A few of the others I had to dig for, doing things like Googling “famous paintings of stags.” Research isn’t always a precise undertaking!

BTW: In addition to exploring the experience of art and art’s influence on our emotions, this book also explores the process of art restoration. Does this serve as a metaphor for a larger idea?

LW: I knew absolutely nothing about art restoration prior to beginning this book. I just needed a department of the National Gallery for Philippa to work in that would give her a bit of seclusion and a chance to lick her wounds, as it were. I settled on the conservation department and began to learn about the process of art restoration, and everything I discovered lent itself incredibly well to Philippa and her journey.

During the process of restoring a painting, a single art restorer traditionally completes every aspect of the restoration of a given piece — you don’t have one person stripping varnish, another scraping away patches, yet another handling inpainting, etc. The entire restoration is done by one artist, because it really is an art and not a science. And the process of art restoration became a metaphor for both Philippa’s relationship with Evelyn and her own personal journey, right down to the fact that corrections to a painting are called pentimenti, which means repentances. My absolute favorite scene in the entire book is one where Philippa watches her friend Jack doing restoration work on Rembrandt’s The Woman Bathing in a Stream — you can see the wheels in her mind turning as she makes those connections between what she’s seeing and her own experiences thus far.

BTW: In The Light Between Worlds, chapters alternate between post-war England and flashbacks to the siblings’ life in the Woodlands. Why did you choose this structure?

LW: While Philippa and Evelyn can obviously be read as references to Susan and Lucy Pevensie, one of the primary things I set out to do in The Light Between Worlds was to write a book in which two sisters spend their time telling stories about each other. Where they’ve become so caught up in each other’s narratives that they’re either going to have to find a way to get free and live their own lives, or they’ll eventually collapse in on each other and implode. While Evelyn spends her time remembering the Woodlands, she’s really remembering Philippa’s story there — Ev herself is very passive in her memories of the Great Wood, and doesn’t do much. It’s Philippa who becomes a participant in the larger events of the Woodlands, though she never embraces that world like Evelyn does. And Philippa’s memories of the aftermath of the Woodlands — of the return home — are all about Evelyn and her failure to adjust. Phil and Ev are primarily products of their relationship with each other, so you see both of them reflecting on their past together, while living in a present where they’re both struggling to function and redefine themselves on their own.

LW: Of course! I’ve currently got a second standalone YA fantasy in the works — it’s set in an alternate England where the well-being of the land is governed by five magical manor houses. Think Downton Abbey with a touch of Beauty and the Beast. Violet, the main character, has been separated from Burleigh House, the manor her family has tended for 800 years, and when she’s finally able to return, finds the house in dire straits. It’s up to her to restore her home before it wreaks havoc on the surrounding countryside. Violet’s story is one about belonging (I don’t think I’ll ever get away from that theme!) and expectations, and how the choices and worldviews of the people we’re closest to shape and change us, sometimes for better and sometimes for worse.