Independent booksellers across the country have chosen Matrix by Lauren Groff (Riverhead) as their top pick for the September 2021 Indie Next List.

“Lauren Groff has created an incredibly powerful portrait of the compelling Marie de France, banished to 12th-century England to live in a failing abbey,” said Rosanna Nissen of Barrett Bookstore in Darien, Connecticut. “I fell in love with Marie and the sisters she lives with.”

Here, Groff talks with Bookselling This Week about faith and climate change. 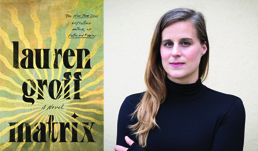 Bookselling This Week: So much of the real Marie de France’s life is unknown. In Matrix, you’ve not just given her a history, but a body. She’s rooted in the earth, her work, in ritual. How did you craft her character?

Lauren Groff: When I began to think of this book, I circled back to the two books of Marie de France that I’d read long ago and loved deeply, her Lais and her Fables. I extracted out of them a great deal of vivid detail, and, over the course of a delirious month, wrote a life backwards, into the detail. I don’t think I kept a single word from this first establishing biography, but I kept the sense of the life, the general biography, the idea of Marie as a humorous, practical, smart, strange human. And then when I went to write the actual book, I wanted to also write about the animal body of this person because there’s no such thing as ecstasy on this material plane without a full embrace of the physical living mortal flesh.

BTW: What was the experience of entering her headspace like?

LG: Historical fiction is a curious thing. The reader, picking up a new book that speaks of times past, knows that it’s a modern voice projected in retrospect; there’s always a little awkwardness in the verisimilitude, a sense of being just a breath behind the beat. I wanted to write a book that embraced this syncopation, that reverberated quite intentionally between the eras, both in the past and in the present: I wanted the time of Marie to speak forward into our times, and our times to speak backward into hers. And so I split her sensibility, a bit; I tried to make her a creature of her own times, but also a creature that resisted her own times in a way that is difficult to see in the historical record, which tends to conflate all experience past into singular collective convention. But people were as varied and strange and humorous and freethinking then as people are now, and I wanted to make space for the brain that was unusual for her time.

BTW: Her faith is layered and complicated. God takes a backseat to her faith in her nuns, her visions, herself, the Virgin Mary. Why write her faith in this way?

LG: There is a shifting and softening in Marie over the course of her life, which comes directly out of the love of her flawed and human daughters in the nunnery. I believe god is found only in a small part in texts and song and work devoted to eternal ideas, but that god is mostly in the people around us, that an unbeliever in dogma can still be the strongest believer in human goodness and all the vast and mysterious light the world contains. To find god in the human seems to me to be the real Christian story, the much larger story, though those of us who were raised in religion have often been taught the inverse.

BTW: There’s a line that sticks out to me. “How strange, she thinks. Belief has grown upon her. Perhaps, she thinks, it is something like a mold” (78). Multiplicity is embedded within this narrative; the abbey sees enormous growth with Marie as abbess. But this growth comes at a great cost, and at Winter Institute earlier this year, you mentioned this book is the first of three dealing with religion and climate change. How do you situate this book in the larger conversation of climate change?

LG: The big question I’ve been working over these past few years is: How much the environmental degradation we’re facing has its roots in the corrosive nature of western religion, how much comes from a deliberate misreading of Genesis, where humans have read domination over nature and the beasts of the sea and earth and sky, instead of stewardship? These books are a way for me to wonder out loud how much the horror we’re facing now comes out of the sheer and boundless avidity of both the Catholicism and Protestantism that formed European culture.

BTW: Power is constantly in question in Matrix. As holy women, nuns were said to have the least power, but Marie nearly resembles royalty in her reach. Can you talk about the power nuns have held throughout history?

LG: I think I was interested in different gradients of power: There’s the power that the abbeys and abbesses held over their own lands in the medieval ages, which was often quite vast, the power that women wield over other women (and if it is different from the power than men wield over them), and the power the sisters held over their own autonomy, which was often hard-fought and rarely won. No matter how protected the nuns were from exposure to men, no matter how the abbesses ruled like sovereigns of their own lands, they were still subject to the rule of priests and bishops and cardinals and the pope. But to be able to find a space for selfhood outside of the marriage contract in a time and place where women were only slightly more valuable than horses feels inherently subversive, no matter how the women in question managed to make it happen.

BTW: Also at Winter Institute earlier this year, you mentioned visiting the Regina Laudis convent in Connecticut for research. What was that experience like?

LG: Regina Laudis is a glorious place, a Benedictine abbey where the sisters are in full enclosure, but, according to the Rule, welcome guests with great generosity and extraordinary food. A visitor is asked to help out with the nuns’ work, and I spent some extremely happy hours clearing out the winter garden and chopping wood with them. Every sister I spoke with was gentle, brilliant, and curious. I love them so much.

BTW: What role do independent bookstores play in your life?

LG: Independent bookstores play an enormous role in my life. Even if I’m in a new city for only a few hours, I’ll try to find the nearest independent; it’s a relief to walk in, a joy to feel at home anywhere I am. Bookstores make up the diaspora of my intellectual life, where I buy all my books, where I meet new writers both in flesh and on the page. I would never be able to spend the hours and years of trial and failure that it takes for my books finally to come together without the support of independent bookstores and booksellers.

LG: I love this question because it’s only when the book is finished and in readers’ hands that the writer ever really gets a sense of what they have been reaching for all along. When I’m writing a book, all I know is that there is something enormous and murky that I’m drawn to, something that I want to spend years examining. In this case, I wanted to think about god, women, power, and the way that humans’ interaction with nature is driven by the spiritual frameworks that they are living within. Beyond that, I want readers to feel as though they have brushed up against real people, with real relationships, that they have had a real and moving aesthetic experience.