A Q&A With Angie Thomas, Author of Spring Kids’ Indie Next List Pick “On the Come Up”

Indie booksellers across the country have chosen Angie Thomas’ On the Come Up (Balzer + Bray) as one of their top picks for the Spring 2019 Kids’ Indie Next List. 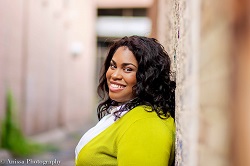 Sixteen-year-old aspiring rapper Bri is the daughter of an underground rap legend who died before making it big. In the years following her dad’s death, Bri’s family struggles to make ends meet. Her mother, a recovering addict, loses her job; her brother struggles to find work outside of food service, despite his college degree; and her Aunt Pooh, who is supposed to be her manager, gets too involved with the Garden Disciples to be able to book Bri the opportunities she needs. Bri knows she needs to make it big to help her family, and she pours her frustrations and anger into her first song. But once it’s released, it becomes viral for all the wrong reasons.

“For her sophomore book, Thomas gives us a heroine — Brianne — who is struggling against both her family’s expectations as well as those of white people as she tries to make her way doing what she loves: rapping. We follow her through ups and downs as she navigates racism at her school and the expectations of black girls in the music world,” said Melissa Fox of Watermark Books & Café in Wichita, Kansas. “Excellently written and incredibly unputdownable, you will cheer and cry as Bri makes her way!”

Courtesy of Balzer + Bray, here is a Q&A with Thomas.

What would you like to share about your new novel, On the Come Up? The main character of Bri seems to have a lot in common with Angie Thomas.

There are bits and pieces here and there that Bri and I have in common, but it’s mainly our love for hip hop. I was a lot quieter than Bri was when I was a teen, but similarly to Bri, I used hip hop to express myself.

The Hate U Give has been made into a feature film. Have you already been approached about making On the Come Up into a film as well? 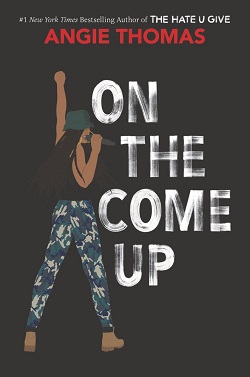 A film is always a possibility. That’s all I can say at the moment.

The Hate U Give and On the Come Up take place in the same town. Is this a reflection of the town you grew up in? And do you foresee more novels based in Garden Heights?

Garden Heights the neighborhood is based on my own childhood neighborhood, down to the landmarks and businesses and even the characters. My third book will be set in Garden Heights as well. After that, I don’t think I will return to that neighborhood.

Who were your greatest influences in hip hop? How important do you feel the storytelling aspect of hip-hop music is as a form of expression and a way of spreading knowledge?

Some of my biggest hip-hop influences are 2Pac, Notorious B.I.G., TLC, Kendrick Lamar, J. Cole, Lauryn Hill, and Rapsody. Hip hop showed me myself when books didn’t, and it told the stores I connected with the most. That’s extremely important for young people especially, because it often reminds them they aren’t alone. Plus, hip hop helps make more people aware of societal issues. We wouldn’t know the truth of what happens in urban America if it weren’t for hip hop.

Are there any books or authors out there that you can recommend to someone looking for more diversity in both characters and life experiences?

Long Way Down by Jason Reynolds
Odd One Out by Nic Stone
Monday’s Not Coming by Tiffany Jackson
The Poet X by Elizabeth Acevedo
Love, Hate, and Other Filters by Samira Ahmed
Little & Lion by Brandy Colbert

Could you share a bit about the We Need Diverse Books movement, and what being the inaugural winner of the Walter Dean Myers Grant meant for you and to you?

We Need Diverse Books has done tremendous work for children’s literature. It has called attention to the fact that marginalized children have not been provided nearly enough books that show them themselves. Winning one of the Walter Dean Myers grants gave me so much encouragement — it let me know that there was a place for stories like mine in children’s literature.

How does it feel to go from finding an agent through a Q&A on Twitter to now being hailed as “one of the most influential literary voices of a generation”?

It’s amazing. I’m honored to know that so many people have connected with my words. I also hope that it inspires aspiring writers — you may get lots of rejections along the way, but all it takes is one “yes” to change everything.

You delve into the topic of racial profiling in On the Come Up. Can you talk a little about why you chose to highlight this topic?

So often when people talk about racial profiling, it is in reference to young Black men, and understandably so. However, young Black women are just as affected. Studies have shown that they’re more likely to be suspended and even expelled than their white counterparts for the same offenses, thus leading to early criminalization. I wanted this book to speak to those girls who deal with that; to the girls who often feel like they’re both too much and not enough. But I also hoped to shed light on how these girls are often wrongfully perceived in hopes that people will work toward changing their perceptions.

You talk about the media in On the Come Up and how they frame a story to fit their agenda. Did you draw inspiration from the media today?

Absolutely, but it wasn’t just because of its current state. For as long as I can remember, there has been media bias against Black people. Even when we’re victims, we’re made out to be threats, and this is something I wanted to highlight. Bri is a victim because of what happens to her at school. She’s a victim of her family’s circumstances. She channels her anger, frustration, and pain in her art, and yet still she’s made out to be a villain. No one ever asks why; they only assume the worst, which is so often the case in the media when it comes to young Black people.

Bri has a complex relationship with her mother, Jay, because of Jay’s history of addiction, but she has forgiven Jay and chooses to stay by her side. You do an amazing job of showing “nontraditional” family dynamics in The Hate U Give. Why did you choose to do the same here?

I love showing nontraditional family dynamics because for so many of my readers, this is their reality in one way or another. Bri’s relationship with her mom is one of my favorites due to the fact it is so complex and at times, there’s so much pain there. Still, love is stronger than all of that, and I wanted to show how it can shine through regardless.

Through her music, Bri becomes a hero in the Garden and a villain to the world. What are examples of hip-hop artists who shared a similar fate?

Immediately, I think of Tupac. When Tupac was alive, he was vilified in the media. Politicians spoke out against his music. There were groups that bought his CDs and destroyed them. But in my neighborhood and other like it, he was a hero. The same goes for NWA. I would say that a lot of today’s rappers are considered heroes in the real-life Garden Heights of the world but are seen as villains by the majority. Even beyond hip hop though, America unfortunately has a history of vilifying those who speak up for Black people. Dr. King is celebrated now, but when he was alive, he was considered an enemy by many white people and a hero to Black America. The list goes on and on.

The Hate U Give paid homage to Tupac, but On the Come Up pays homage to The Notorious B.I.G. (aka Biggie Smalls). Both rappers were influential to hip hop in the ’90s, and both rappers were at odds with each other and divided the hip hop community in some ways. Did you know immediately that this story would nod to Biggie, or did you realize it as you wrote?

I knew from the start that this novel would pay homage to Biggie. In some ways, I see Starr as Tupac and Bri as Biggie (without the beef). This is despite the fact that Starr’s home life is actually more like Big’s, with a family that is financially stable, and Bri’s home life is a lot like Tupac’s — her family’s struggling, and like ’Pac, her mom was once addicted to drugs. For me, the parallels are based on their desires. Tupac was passionate about community, as Starr comes to be. That’s not to say Bri isn’t, but similar to Biggie, her desire to make it rules above all. But just like Tupac and Biggie, despite the fact that these two girls have different experiences and different motives, they both find themselves being voices of their community and come to understand just how powerful their voices can be.

Art is a reflection of the times in which we live. What do you think art says about the time we live in today, and how did you incorporate this into the novel?

Today’s art reveals that there are way more problems that many people realized, and it does this by showing so many different perspectives. I also think that art, specifically YA literature, shows that young people deserve to be seen and heard. I incorporated that through this story by showing a young woman who speaks up, like so many young people want to do, and the way the world unfortunately focuses on how she says things as opposed to what she says.

What will The Hate U Give fans be surprised by in On the Come Up?

What surprised you in writing On the Come Up?

I was surprised at how different the neighborhood could feel for me, the writer. Bri’s story is more intimate in some ways, and the neighborhood almost feels smaller in On the Come Up, which works for this story. I was also surprised that I could come up with a huge cast of characters that were totally different from the ones in THUG.