A Q&A With Charlotte McConaghy, Author of August’s #1 Indie Next List Pick

Independent booksellers across the country have chosen Migrations by Charlotte McConaghy (Flatiron) as their number-one pick for the August 2020 Indie Next List. 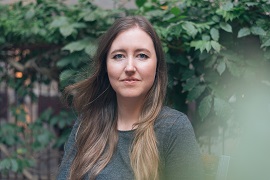 “Imagine a world where almost all the animals have disappeared. Imagine a love strong enough to believe it can make a difference,” said Lisa Swayze of Buffalo Street Books in Ithaca, New York. “In a fragile, near-future world, author Charlotte McConaghy gives us Franny Stone, a character as wild and broken as the few remaining Arctic terns she is determined to follow on what will most likely be their last migration. Franny’s quest is as epic as Captain Ahab’s, and while it leaves much destruction in its wake, it is ultimately a quest toward life. Migrations is a book so beautiful it will leave you breathless. Breathless with cold despair, and breathless with pulsating life and hope. This is a truly stunning debut.”

Here, Bookselling This Week and McConaghy discuss climate change, the migratory patterns of birds, and building a sense of place.

Charlotte McConaghy: It’s hard to pinpoint exactly where the idea for Migrations came from because it came in so many tiny pieces at different times, but I can identify that it started to culminate in my mind when I went travelling some years ago. I went to live in the U.K. for a year, and I travelled around Ireland, a place I really love and feel quite connected to, and became the inspiration for my protagonist Franny’s home. I also went to Iceland, which is an extraordinary place. I remember noticing these beautiful big geese, the Icelandic greylag geese. I felt connected to them because they had these sweeping, long journeys, and I felt a little like I was doing the same. It got me thinking about migratory birds and the people who study these birds, and that’s maybe where the idea for an ornithologist character came from. 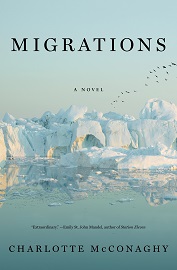 But the book also came from learning about the Arctic terns and their courageously long migration, and the forces of climate change that are making the journey harder for them each year. And it came from learning that humans have killed over 60 percent of the planet’s wild animals in the last 50 years alone. This stark truth forced me to imagine the world without animals and how that might look and feel, which became the setting for Migrations.

BTW: How did you craft Franny Stone’s character?

CM: I wanted Franny to be like the birds she loves: migratory and roaming. I’m not a wanderer myself but we did move around a lot as a kid, so that by the time I was 21 years old I had lived in 21 different houses. I guess I know a little about what it feels like to be unsure where you belong, and this is one of Franny’s defining struggles. She’s someone who is wilder than most people, or at least more easily able to tap into that wildness. She doesn’t feel ambition or greed; she is led through the world by instinct, which is a creaturely trait. She yearns for family and connection and it’s this loneliness that leads her to make a family of the natural world. She’s a character whom I got to know as I wrote her. She unspooled before me in ways I might not necessarily have expected. The losses suffered by the world are reflected within her; she’s a woman who feels very intensely. Yet she’s contradictory in nature: she wants family and love but her wandering feet and yearning for exploration force her to leave her husband over and over. Because she is so instinctive, I had to craft her using instinct. She’s a lot of things I wish I was more of — brave and earthy — and also many things I’m glad I’m not.

BTW: Franny is on a quest to find and follow the world’s last flock of arctic terns on their final migration. Why arctic terns specifically?

CM: I really loved learning about these birds. I remember the wonder I felt when I learned that they have the longest migration of any animal in the world, from the Arctic to Antarctica and back again each year, so that in their lifespans they will travel the equivalent distance of to the moon and back three times. That seemed like an extraordinary distance, a journey that grows more difficult each year, as humans fish their waters to scarcity. They became a symbol of courage and hope for me, and seemed like the perfect choice for Franny to follow.

BTW: This story takes place in a number of different locations, including a ship called the Saghani and a women’s prison in Ireland; Franny also reflects on her time in Galway and in Australia. Why did you choose these settings?

CM: As far as the sea voyage, I was led by the logistical necessities. I looked at the routes the Arctic terns actually fly and I mapped a course for the Saghani based on that route, which, wonderfully, finished in Antarctica — one of my all-time bucket list places. As for Franny’s life, the various locations I chose were simply places I love. I grew up on the south coast of Australia so it felt natural for Franny to spend her adolescence there. And I love Ireland, and always wanted to write a story set there, so that seemed natural, too.

BTW: What was your research process like for this book?

CM: I spent a long time researching before I felt ready to start writing. It was quite a daunting idea, when I broke it all down and realized how very little I actually knew about most of what I’d planned to write! I needed to learn a great deal about what it was like to be on a fishing boat in open sea — a challenge for me, as I get very seasick! — and about oceans, currents, and fishing. I also needed to learn about ornithology, and Arctic terns specifically. I needed to learn about any of the places I hadn’t been, such as Greenland, Newfoundland, and Antarctica. And, of course, I needed to learn more about climate change and the disastrous extinction crisis the world is facing. Though difficult, it was an amazing process and I feel very lucky to have been through it.

BTW: On the note of migration, the idea of leaving is a recurring motif through this story. Franny notes that this is a common trait in her family, but she also discovers it’s a trait among those working on the Saghani, too. What drew you to this idea?

CM: I was curious about the type of people who are drawn to life at sea; you would have to be comfortable with leaving any idea of a normal life behind in order to become a fisherperson. They’re at sea for months at a time, they come and they go, I imagine it to be quite a transient life. And I was curious, too, about people who choose a life of roaming and exploring rather than putting down roots and finding a single place to stay. It struck me as a kind of untethered life, with great freedom to see and do and experience all they can. Perhaps more like wild creatures. There is no stillness in a bird’s life; movement, for them, is survival. And this is true in some ways for Franny. But the burden for her is that she has always journeyed alone, which is why she takes to the crew of the Saghani so well — she has finally met people who are more like her.

BTW: The idea of leaving seems to be emphasized more than having a specific destination in mind. The characters are following ideas, people, or animals. Why did you decide to explore that distinction?

CM: Sometimes life can feel like it has no destination. But the old adage is that it’s the journey that matters, and as simple or as clichéd as that may be, I do think it’s true. Franny has always felt like her life was an endless migration without a destination, and this is painful for her because she has little control over her need to be moving. She says in the book that it isn’t fair to be a creature who is able to love, but unable to stay. It’s this idea of leaving for the sake of leaving that compels her, and is so bewildering. But it’s only by coming to understand that it’s in her nature to wander — that this is okay, it’s part of who she is and she doesn’t need to be ashamed of it — that she can forgive and be at peace with herself.

CM: We live in a world now that’s bombarded with dire threats and warnings, and we all feel some low-level anxiety about the state of our planet, especially when we also have to deal with governments that seem to be actively contributing to climate change instead of trying to fight it. Along with deep anger and fear around that, it also creates a combination of hopelessness and apathy in playing our part. It’s hard not to detach when there seems to be no hope in sight, and the people who are meant to be steering us through this are burying us deeper in it. It takes a lot of inner strength to be optimistic in the face of that.

It was really important to me that despite the book embracing this bleak possible future, it was also hopeful. I created a character who’d lost all hope but, against impossible odds, is able to rediscover it. She’s a woman who’s dealt with unimaginable loss, but is able to find a way to see the beauty that still remains in the world. She's brave enough to pick up the fight that we haven’t yet lost, and I hope that’s what this book inspires readers to do. It’s about trying to deny the pervasive fear that we are powerless. We’re not powerless. We haven’t yet lost the fight. We still have time and each one of us can make a difference.