A Q&A With Megha Majumdar, Author of June’s #1 Indie Next List Pick

Independent booksellers across the country have chosen A Burning by Megha Majumdar (Knopf) as their number-one pick for the June 2020 Indie Next List. 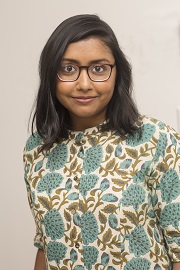 A Burning, Majumdar’s debut novel, follows three characters in contemporary India who each have different dreams: Jivan wants to rise to the middle class, PT Sir chases political power as his country barrels toward right-wing extremism, and Lovely seeks fame. After Jivan is accused of being connected to a recent terrorist attack, their loosely connected lives become intertwined in ways they never could have imagined, and all three must decide what it means to be complicit.

“Majumdar’s suspenseful narrative holds a mirror up to society at large, reflecting the lies people tell themselves to rationalize sacrificing morality for personal gain,” said Lisa Johnson of Penguin Bookshop in Sewickley, Pennsylvania. “Unintended consequences from an impulsive social media post explode against a backdrop of deep economic insecurities and centuries-old prejudices. A searing debut, this novel is timely and timeless. It packs a punch way above its weight. Brilliant.”

Here, Bookselling This Week talks with Majumdar about how she crafted the book.

Megha Majumdar: I was keeping track of the news and looking at what’s happening in India, which is where I grew up. There’s been a rise of the right wing in India, which, I think, is mirrored with the rise of the right elsewhere in Europe and certainly here in the U.S. I wanted to write from that place of fear and alarm and anger, while looking at this turn to the right. And I also wanted to explore how individuals pursue their dreams and hold onto who they are and what kind of life they want to have even when the systems and institutions around them defeat them at every turn.

BTW: Jivan’s narrative touches on many current issues in the political world, from discussions of media corruption to the issue of effective counsel, all beginning with a simple post on Facebook. How did you craft her character? 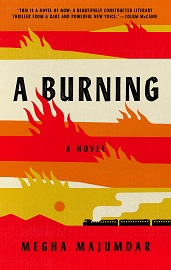 MM: I wanted to write about somebody who has a very earnest goal and is very determined to meet it. I also wanted to write about things that should be very simple, like getting a reliable water supply to your home or having a place to live that is not threatened and does not have to be guarded from demolition, which Jivan is not able to. She has to constantly fight to get these things and is defeated by the social institutions that are meant to serve her, like the water supply board and her lawyer who is assigned to her from the courts.

BTW: On the issue of effective counsel, did you have any recent cases in mind while writing?

MM: A lot of this is inspired by what I read in the news, especially the lynching of people who are suspected of having killed a cow or eaten beef. A frightening thing that’s happening in India is that Hindus consider the cow to be sacred, and they don’t eat beef, but Muslims do eat beef; the sacredness of the cow has become this issue behind which Hindu nationalists have found themselves gathering with increasing fervor, so there’s definitely been cases where people are attacked and killed because they’re suspected of having eaten beef. I wrote about a truck transporting cows being stopped and searched on the highway — that was inspired by stuff that was in the news.

BTW: As an American reader, I couldn’t help but notice the parallels between the society this book portrays and that of the U.S. Was this something you wanted to evoke?

MM: Yes — while being very specifically about India, I also wanted it to ring true for an American reader. I think, right now, we are in a moment during this pandemic where we are definitely seeing how we’re at the mercy of a state that does not really care about the wellbeing of the people who live here. There’s a growing sense that the institutions and branches of the government that are supposed to serve us perhaps don’t have our best interests at heart. And there is also the sense — with bringing up mutual aid groups, neighbors trying to help neighbors, people checking in and doing what they can for each other during this time, and the fundraising that’s going on for so many kinds of nonprofits and bookstores — that we are all we have. The state isn’t stepping in in an effective way. I hope that this sense of being betrayed by institutions that are meant to serve us will help American readers think about their lives and what they’re seeing about government and class and resources and stratification and privilege here.

BTW: Lovely, an aspiring actress, plays what on the surface appears to be a small role in Jivan’s story, but by the end is clearly much larger. How did you craft her character and her voice?

MM: I wanted to write about somebody who is marginalized in all of these complex ways, but still has great intelligence, great humor, and a strong sense of who she is. That’s why I wrote her dialogue and voice in the way that I did, which is a kind of altered English. In India, and I think in a lot of places and perhaps here, too, there is this sense that English is this centered language. You have to learn English to get ahead, and how well you speak English is the gauge for how far up you are in society. I wanted to write about somebody who is not interested in that kind of learning, but still has intelligence and her own kind of learning with which she makes her way in the world. And so, altering her voice a little bit and making it stand out from the other characters was, I hope, a way of signaling those issues of class and education while not compromising at all on the way she’s thinking about social issues and her own place in the world.

BTW: PT Sir, a teacher who falls in with the right-wing party, also contributes to a larger conversation this book engages with about political complicity. Can you talk more about that?

MM: I wanted him to be a complex character, somebody who is drawn to this tiny glimpse of power in a country with huge power differentials, where most people feel that they don’t have very much power in the face of the government. I wanted to write about what this ordinary, middle-class schoolteacher does when he faces an opportunity to grab some power. How will he act? What does he do? And how does his moral center shift? He is a person grasping for power, and you can’t call him evil or not. He’s just reaching for the thing that will make his life and his wife’s better. I tried to keep from portraying him as an evil person, but to show how someone who is very ordinary and has not been involved in politics his whole life can get drawn into this because of the appeal of having some power. He does, of course, become complicit in really profound ways, but I hope that the book is able to urge readers to ask what they might have done differently.

BTW: There’s also brief interludes throughout the book that give readers a look at the world of some peripheral characters. Why did you want to include these perspectives?

MM: Initially, I was a little bummed to realize that I could only really write about three characters in depth and with any real specificity when there were so many stories that I could follow and so many specific lives and circumstances I could explore. So, the interludes, I hope, signal that there is such a wealth of stories in this country. There is such a wealth of people finding their own ways, being creative in their lives, doing what they have to in order to move up and earn a better way of life for themselves and their families. I simply did not have the room to write all of them while keeping it a novel that would follow some people in depth.

BTW: Is there anything that you’d like to add?

MM: I want to encourage readers to buy a book from an independent bookstore right now. One of the silver linings of this moment is that my local bookstore can be any bookstore in the country. I’ve found it really special and enlightening and fun to go to the websites of bookstores that I’ve never actually visited in cities far away from New York and see what their staff picks are and buy from them.