Sales of “The Testaments” Abound at Indie Bookstores

On Tuesday, September 10, Margaret Atwood’s new novel, The Testaments (Nan A. Talese/Doubleday) was officially released, and despite the rocky start following Amazon’s violation of Penguin Random House’s embargo, indie booksellers told Bookselling This Week that they are still seeing plenty of sales of the book.

Rebecca George of Volumes Bookcafe in Chicago, Illinois, said that on top of pre-orders from the store’s campaign in April, she saw an uptick in special orders following the store’s tweet condemning Amazon. 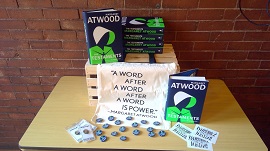 “Our tweet and the New York Times article picked things up a bit,” George said, noting that the book sold well in-store. “If anything, it reminded people they can order from us overall, which, in the end run, is the best possible thing.”

At Trident Booksellers and Cafe in Boston, Massachusetts, Courtney Flynn noted that sales were also strong. “We were pleased, but not surprised, that the book flew right out of the gate,” she said. “We received the books the Friday before, and were even able to get a reorder in and received before the end of the week, so we saw no gap in stock.”

Trident held a midnight release party to promote the book, she added, which featured a scavenger hunt, trivia, and a letter-writing station so customers could contact their local representatives. Additionally, the store collected donations for Planned Parenthood.

Carrie Koepke, the store manager at Skylark Bookshop in Colombia, Missouri, also noted a strong week of sales, stating that her store has sold out of stock once and re-ordered twice already.

“My daughter and I did a cross-generational book discussion for three months,” said Koepke. “In August we did [Atwood’s] The Handmaid’s Tale, in September we did Vox by Christina Dalcher and Naomi Alderman’s The Power, and in October we’re discussing The Testaments. It’s been generating a lot of interest.”

Cassie Clemans of Roundabout Books in Bend, Oregon, also reported that sales for this week, in addition to pre-orders that had already been placed, were promising. “For us, we had a pretty good first week with Atwood,” she said. “We ordered a lot expecting to sell it through the holidays, and I think it will be good. We’re really excited that it’s out!”

And in Monticello, Illinois, Nicole Stewart of Hartfield Book Company told BTW that sales have also been good for her store, both this past week and during the pre-order campaign it ran for The Testaments.

“I think, generally, customers have been positive and excited [about the book],” she said, noting that following the pre-release incident with Amazon, “we had a couple of people come in specifically because they’d heard about that, and wanted to buy from us instead, so that was kind of awesome.”