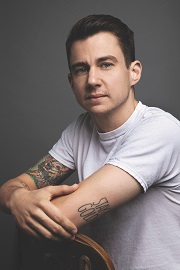 “Pony and Georgia will steal your heart in this gentle gem of an #OwnVoices contemporary young adult novel about a transgender teen who wants his body to match his identity and the girl who slowly but steadily falls for him,” said Joy Preble of Brazos Bookstore in Houston, Texas. “Stay Gold is one of those rare novels that reads easily and has comic romantic appeal, but punches hard realism into your gut. Reminiscent of the nuanced storytelling in K.A. Holt’s Redwood and Ponytail, the novel is both accessible and humorous, yet deeply moving and emotional as Pony and Georgia balance being true to themselves with the often-destructive expectations of family and friends. Hopeful, heartfelt, and very needed.”

Here, Bookselling This Week talks with McSmith about crafting the novel.

Tobly McSmith: I was actually at a sales conference for HarperCollins [in Miami]. I was listening to a presentation by the YA department about #OwnVoices, and in particular it was The Hate U Give that they were featuring, and I hadn’t really heard of or thought about #OwnVoices. As I was sitting there really thinking about it, I realized that I am a part of #OwnVoices. I have my own voice, and a story came into my head — he was always named Pony and she was always named Georgia, and the plot points were just coming and I was trying to grab onto them in my head. I’d never written a book. I studied business in college, so I had to learn how to write, too, but I was so passionate to get the story out that I did it on top of a job and writing musicals.

I wanted to write this book for two reasons. I wanted to tell the experience of one trans person in America, so that other trans and nonbinary people can see a little bit of themselves in the story. But I also wanted to educate more people to our everyday experiences, our everyday setbacks, and all of that. It was important to me to write a book where somebody in Texas could read it and get those facts, and understand things like binders in a fun way. I tried to be as fun and entertaining in that education as possible.

BTW: Stay Gold and Pony’s name are references to The Outsiders. Why did you choose to reference this book? 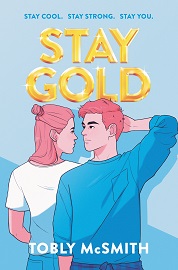 TM: I have “stay gold” tattooed on my arm, and I got it tattooed about a year after I’d transitioned. I’d seen it tattooed on somebody else, because I lived in Brooklyn and everyone has tattoos. When I saw the phrase, it meant something to me. It automatically locked into place that it meant, to me, staying true to yourself. I’d read and loved The Outsiders, and I think that when that book was written in the ‘60s, Johnny was asking Pony Boy to stay innocent in a world of violence and hate. When I think about the LGBT community, it’s not an innocence that we can have because there’s so much violence and discrimination. It’s really staying true to ourselves despite all of the things going on around us. “Stay gold” had always meant so much to me, so it was always obvious that would be the title of the book. And Pony Boy is a nod to S.E. Hinton, but I also really love ponies. I have one tattooed on me — to me, they represent a feeling of freedom, a freedom to be who you are.

BTW: Stay Gold follows Pony, who is going stealth at a new high school in Addison, Texas. How did you craft his character?

TM: Pony is a lot like me. This is my debut novel, and I wrote what I knew. I wanted to write a story about a boy who has gone through a lot of the things that I went through, especially in the first couple of years after I had transitioned. I wanted to write a character that was getting misgendered and deadnamed, and wearing a compression binder and saving up for top surgery. These are all things that I’ve been through. Coming out is also a big theme — coming out to a girl you like. These are all things that I’ve been through, and I wanted to put that into a character so people could understand one story of what it’s like to be trans right now.

BTW: And Georgia is the popular cheerleader he develops a crush on. How did you craft her character?

TM: Georgia felt fun to me. I love Georgia because when I was in high school, I was the [team] mascot — I was fifth in the nation for mascoting — and I hung out with cheerleaders. Many of my best friends are girls, and Georgia is a lot of everybody that I knew. I wanted her to be fun, but I also wanted her to take a journey of understanding a trans person and understanding herself. She lies a bit, she makes up stories, she exaggerates, and I wanted her to get to her truth, too. That was important for me. And it was so fun to do two POVs between Georgia and Pony because I wanted to see both sides of a trans experience, from the inside but also from the outside.

BTW: Pony’s close friends and his sister, Rocky, urge him to come out at his new school and to be a more active participant of the LGBT community in Texas. But Pony isn’t sure he wants that. Can you speak more to this?

TM: Coming out is an interesting topic when it comes to transgender and nonbinary people because no one should ever feel like they have to come out. There are safety concerns, as well as other concerns. And Pony’s friend, Max [who urges him to come out], I understand. I’ve met a couple of people that believe what he does. He’s still young, and he’s very out and proud, and he thinks that we need as many people as possible in the fight to make change. He believes everyone should be out fighting, and that isn’t correct thinking.

No one should ever have to come out as trans, but my hope with this book and the understanding of just one trans person’s life is that we can create a safer and more accepting world, so if people do want to come out they can feel safe. That’s my hope. I am one who stays stealth in communities where I don’t feel safe, and it’s been interesting to write a book with a trans character because I have to come out every time anyone asks what my book is about. It’s kind of changed my life and how I have to live. But it’s an interesting topic and there’s a lot of discussion around it, and I’m glad the book is bringing that out.

BTW: As Pony learns about himself, and as Georgia learns about him, the reader learns about being transgender and what that means. Information is included about discrimination and hate crimes, medical costs and procedures, petitions and fundraising campaigns for trans youth, and statistics. Are there resources you can recommend readers look at next?

TM: There is lots of general information regarding transgender issues at PFLAG.org. For healthcare, Callen-Lorde is my provider and also provides classes and community. The Trevor Project is a place for those in crisis or who need a safe place to talk. And the Transgender Law Center is good for legal questions.

I also want to raise awareness of how important gender-affirming healthcare is for a trans person’s wellbeing, as it lessens depression and suicide. There’s more information at StayGoldFund.org.

TM: I would love for readers to understand one experience of what it’s like to be trans today. That’s why I put the dates on it — I wanted to be sure it lives in history as it was today. In two years, I hope it’s easier, and in five, even easier for trans people. I wanted readers to understand one life, and to have compassion, and that’s it. The theme of it is really staying true to yourself, and it means something different to everybody, but it’s such an interesting thing to think about.