An English literature and writing teacher, Menachem Luchins always had a dream of opening a bookstore as a second career. After a decade of teaching left him horribly depressed, he decided that he needed to change his life. He realized a comic book shop was the answer, and Escape Pod Comics in Huntington, New York, was born. After seven years in business, Luchins decided to join the American Booksellers Association at the beginning of 2020 “to focus on moving forward as a business and store.” 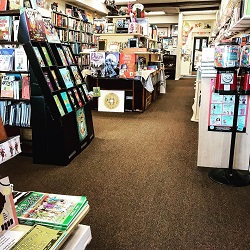 The store’s philosophy is that comics are for everyone. “That doesn’t mean every comic is for every person but that the length and breadth of the medium is wide, that there is a comic out there for every kind of reader. Every aspect of the shop is geared to that idea — that comics is a vast field of material covering all sorts of stories and experiences,” Luchins said.

At a little under 1,200 square feet, three conjoining rooms create an intimate atmosphere. The staff consists of just Luchins and his store manager. Approximately 90 percent of their inventory is comic books, with a few knickknacks, novels, and art books available, too. Their comic selection would best be described as “eclectic.” Luchins said, “we try to carry as wide a range as possible, as that’s our mission.” That means that, at times, they’re not even sure they have a market for certain books. “We generally try to cast a wide net on initial releases, but re-stock based on sales.” With a major focus on kids’ and YA books, choosing which books among many of the same theme or event to carry is part of the curation process.

Escape Pod Comics is inspired by two comic shops: Page 45 in Nottingham, United Kingdom, and Rocketship, formerly in Brooklyn, New York. “My wife and I used to go from Long Island to Brooklyn every few months to shop at Rocketship and were devastated when they closed,” he said. His unhappiness with other comic options was a huge impetus to opening a store of his own. In fact, he features Page 45’s graphic novel reviews on his website, with their permission.

Luchins is cultivating genre interest in his own ways, too. While there is no exact schedule, the store holds an average of about one event a month. Some events are smaller, such as a local artist signing. Others are larger, for example, Free Comic Book Day, where they have as many as 15 different comic creators over the course of the day. They rely heavily on social media for promotion, as many of their customers are long distance.

So why join the ABA now? Luchins thinks that the comic industry is in need of attention. There are trade groups and organizations focused on trying to fix broken aspects of that business, he said, but he feels those discussions don’t really apply to Escape Pod Comics since it is “at least half in the book market.” He said, “often, the issues I was facing were farther and farther from the ones facing the vast majority of comic retailers.” He believes ABA is better to suited to help. While Luchins is looking forward to membership, he actually dislikes the term “community” when used in relation to his customers. “We don’t serve a community; we sell comics. To whom? To anyone who wants them,” he said.