Twitter, Instagram, Facebook, and other social media sites are not magical portals for connecting with customers. That was the message from social media strategist Sarah Benoit in an educational session with booksellers at Winter Institute 13 in Memphis, Tennessee. 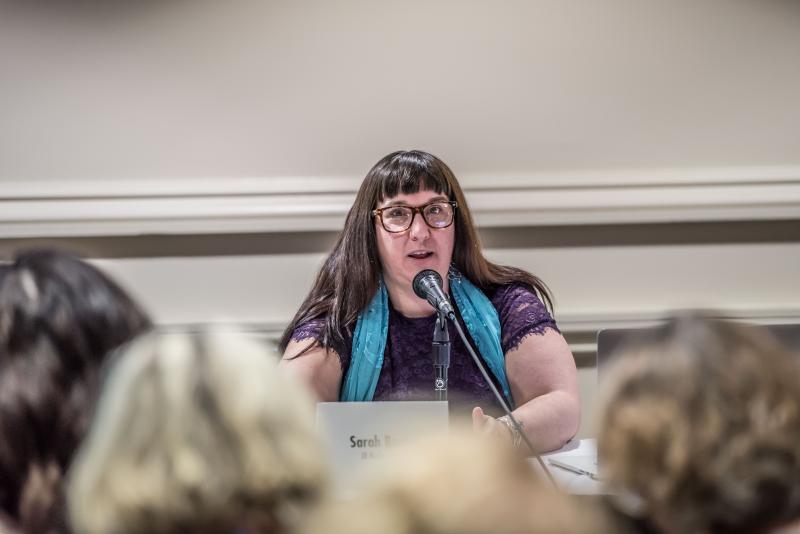 Sarah Benoit speaks to booksellers at Winter Institute.
Unless a bookstore knows what its audience wants, understands who its customers are, and, even more crucially, where they like to hang out on the Internet, any effort on social media can be a big waste of time. “Tweeting doesn’t make you money. Putting pictures on Instagram doesn’t make you money. That’s the reality,” said Benoit, the director of training and lead instructor for JB Media Institute, a digital marketing agency based in Asheville, North Carolina.

“What makes you money is understanding the role of these tools … and how you build relationships with people by communicating through these tools,” she said. “Hopefully, once you’ve done that, you turn them into an advocate who runs around the world talking about how awesome you are.”

The first rule is straight from the Greek aphorism: know yourself. Any social media strategy must be built on a solid foundation of company culture and values that can be communicated through storytelling, Benoit said.

The visuals of Instagram or the words posted on Twitter should all serve the goal of telling the story of a business’ values and identity, which, in turn, will elicit an emotional response from followers. “The reason any of us make a decision to do anything is because we have a feeling,” Benoit said. “We like to tell ourselves after that feeling that we’re super logical, and it all makes sense, but the truth is our brain is motivated by our feelings, so that’s what social media is about: connecting to that part of people and helping them align themselves with your values.”

Making this connection means being specific, Benoit said, noting that generic messages so broad that they could apply to any business or enterprise won’t resonate with customers or elicit an emotional response. “Your audience is not everybody,” she said.

It’s wise to spend time researching the hashtags and keywords that are popular in your industry and among your followers and customers, Benoit said, so that you can join in the chatter. “If they are on Instagram and Twitter, they have a hashtag language that they are using,” she said. “Are you joining that conversation by speaking that same language?” 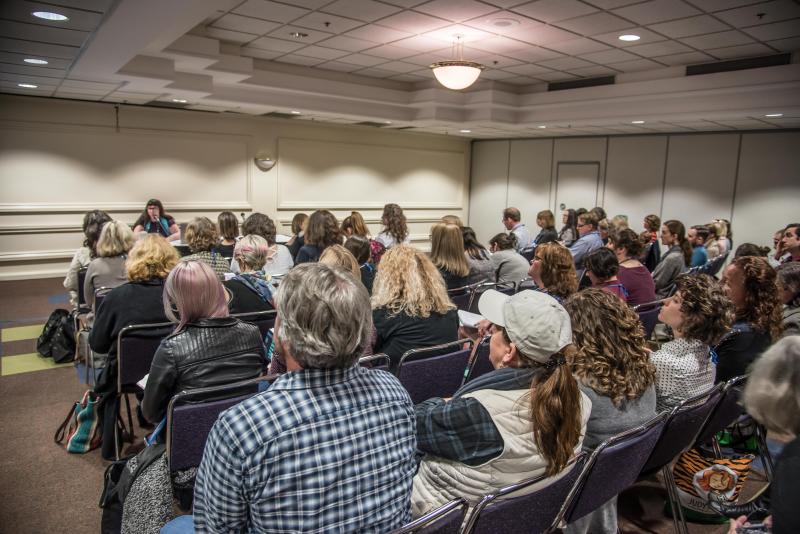 Booksellers at Winter Institute get tips on social media marketing.

Collecting customer feedback is crucial to delivering effective social media content, Benoit contends. Comment cards at the cash register and brief online surveys are good ways to find out what customers think. “If you’ve already had customers for any amount of time, find out what kind of content they want,” Benoit said. “Find out what they care about. Find out which social media sites they are using. Give them simple three- to five-question, yes-or-no surveys where they can let you know how they are interacting online so that you can show up there.”

While Instagram is increasingly popular, Facebook still rules, especially outside urban areas, Benoit said, noting that 79 percent of adults use Facebook. “You don’t have to use every social media site out there, but you know what you have to do? You have to use the social media sites where your customers potentially are hanging out,” Benoit said. “If you’re not with them, then they’re not going to see you.”

And while it’s fun to take artistic photos of store windows or share reading recommendations, social media also means putting in the work to analyze the impact of such posts. Benoit recommends checking out Twitter Analytics, Pinterest Analytics, Facebook Insights, and Instagram Insights at least once a quarter, and ideally once a month.

The data can help inform what time of day to create posts, for instance, and which types of content prompt engagement from customers. “If you can see that a certain type of content falls flat all the time, stop doing it,” she said. “It’s not working. You’re talking into a dead zone because people aren’t relating to what you’re saying. Change it up.”

Equally important is ensuring that customers find consistent factual information across all social media profiles, including Google, TripAdvisor, Yelp, and anywhere else a bookstore has a following. “Let me be clear,” Benoit said. “One of the things your credibility is being judged by is whether or not your name, address, and phone number are consistent everywhere. If you can’t get your own name, address, and phone number right, that’s a major misstep. If you’ve never checked, Google yourself.”

Benoit also advised booksellers to remember that even in the new world of social media, old-fashioned customer service still rules. That means replying to each and every Yelp or Google review, responding to posts on Facebook, and commenting on Twitter.

“Read all your comments and reviews,” Benoit said. “Not only read them, but pay attention to what people are saying and respond. This is one of the biggest mistakes people are making.”

Sometimes people feel that if a comment isn’t a question, it doesn’t merit a response. To illustrate just how this is perceived by the customer, Benoit complimented an audience member’s eyeglasses, then asked her to imagine how odd it would seem if she failed to say thanks or even smile in acknowledgement.

“In real life, that’s super rude, and on social media, it’s just as rude,” Benoit said. “Just because they don’t say something negative or complain doesn’t mean they don’t deserve a response. If they say something awesome, tell them how much you appreciate that.”

Even negative comments can be positive if a business provides excellent customer service to resolve a complaint. “People who actually read reviews and care about them want to see a mixture of things, and what they want to see most is how you handled it,” she said. “Did you respond? Did you respond like you cared about the person’s experience?”

In her own work, Benoit said she replies to every comment, review, and rating, and recommends everyone do the same. “I respond to everything to say to thank you because they took the time to click five stars,” she said. “That was an effort on their part. They had to go to your listing, click on that, put the five stars in. If they weren’t already signed in, they had to actually sign in. So, to me, that’s the greatest effort you’ll get on the Internet these days.”