Wi13 Keynote: Daniel Pink on Why There’s a Best Time for Everything

Using scientific data, bar charts, and an imaginary Hershey’s Kiss as a prop, author Daniel H. Pink entertained and educated booksellers attending Winter Institute 13 about why they should think about the timing behind the decisions affecting their lives and livelihoods. 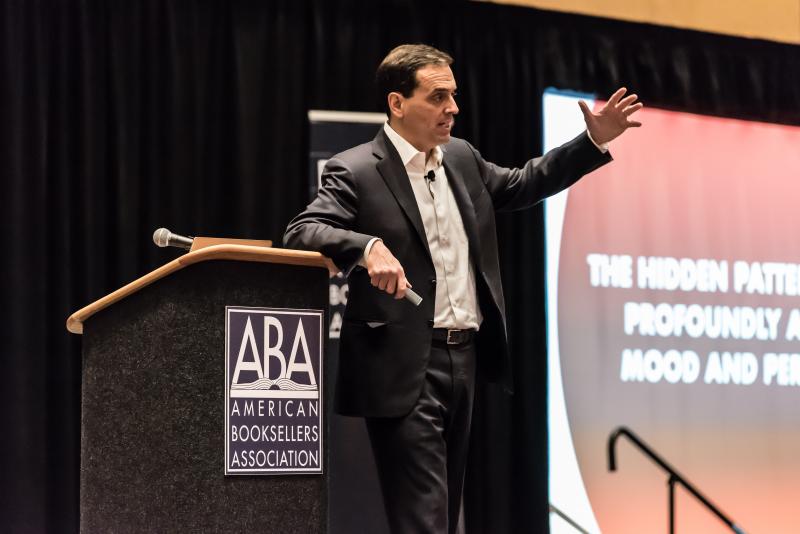 Daniel H. Pink speaks to booksellers in a keynote presentation at Wi13.

Showing a mastery of comedic timing himself, the bestselling author elicited plenty of chuckles in the January 23 keynote address, which covered the major themes of his latest book, When: The Scientific Secrets of Perfect Timing (Riverhead Books).

When follows in that mold by analyzing hundreds of scientific studies to assert that there are optimal times for everything, from having a colonoscopy to taking the SATs. “If there is one big idea here in this book, it’s this: We believe timing is an art, but timing is really a science,” Pink said.

Pink, in his fourth Winter Institute appearance, drew examples from topics as disparate as medicine, zoology, and NBA basketball to deliver four basic lessons in timing for the hundreds of booksellers gathered for his standing-room-only talk.

The first lesson was that there is a hidden pattern to every day that exists everywhere on Earth, across every culture and continent. The pattern revealed itself when Pink looked at studies that mapped people’s moods and behaviors over the course of a day. “All times of day are not created equal,” Pink said.

One example was research that analyzed the emotional content of 500 million tweets generated by 2.4 million Twitter users in 84 countries. Scientists found that there was a change in mood over the course of the day, starting with a peak, then falling into a trough, and finishing with a recovery.

That pattern of peak, trough, and recovery was echoed in study after study that Pink uncovered. For example, he found a study that showed that earnings calls from publicly traded companies conducted in the late afternoon were likely to be viewed so pessimistically that the stock tumbled regardless of the quality of the report.

“Surely these seasoned, hard-headed corporate executives can be able to resist these diurnal patterns in mood, right? Wrong. Here is what they found: Afternoon calls were more negative, irritable, and combative, leading to temporary stock mispricings for firms hosting calls later in the day.”

The effect of the “trough” was so profound that Pink said he’d be loath to submit himself or a loved one to a medical procedure in the afternoon, when anesthesia errors rise and the quality of colonoscopies dips. Even taking a standardized test is fraught in the midday.

The implications for booksellers are to be mindful of when they schedule tasks that require a focused brain. Analyzing financial data makes more sense in the morning, for instance, while easier chores like updating social media could be saved for that afternoon trough. “If you’re more intentional about moving the right task to the right time, you’re going to do better,” Pink said. “When people work often matters as much as what they do.”

His second message for booksellers was to schedule breaks with as much diligence as they do other tasks to keep up their energy and mood.

Pink cited a study that found that prisoners who went up before a parole board in Israel early in the day were more likely to win their freedom than those who were judged in the afternoon. However, if the judges took a break, the chances for release went up. “Breaks can change our decision making,” Pink said.

Managers are just starting to wake up to the benefits of breaks, Pink said, recalling that as recently as 15 years ago workers bragged about pulling all-nighters. “I’m convinced that the science of breaks is where the science of sleep was not too long ago,” Pink said. “Breaks are an integral part of what we need to be doing every day.”

He told booksellers that any break is better than no break, but the best breaks are taken with a companion and involve physical activity, preferably outdoors.

Pink, who lives in Washington, D.C., said he started scheduling two breaks for himself every day, including a 10-minute walk around 1:30 p.m. and a 15-minute round-trip stroll to the local post office with his wife at 4:00 p.m.

“Don’t think of breaks as a deviation from work. Think of them as part of work,” Pink said. “When you have your booksellers who are on the floor…make sure they take those breaks. There are some people who want to impress you or feel heroic or feel so fully committed to literature that they say, ‘Oh, I’m going to skip my break.’ No. Don’t let them skip their break. Breaks are really important.”

Pink’s third insight was to look for the midpoint in a project, event, or activity and to be mindful of its potential for good and ill.

Just as in the day, the arc of a human life resembles a curving “U,” with the feeling of well-being peaking in young adulthood, drooping in middle age, then rising as the senior years approach. “The absolute nadir of well-being for American men is 52.9 years,” Pink said, referencing one of the charts he projected for the audience.

Even though the midpoint was correlated with a slump, there was some good news about the midpoint. It turns out that teams working on a project start to get the most focused at the midpoint regardless of whether it falls on day 17 of a 34-day project, day six of an 11-day project, or 30 minutes into an hour-long activity.

“There’s something about the midpoint that can fire us up,” Pink said, calling it the “uh-oh” effect when someone realizes there’s only half the time left.

An analysis of NBA basketball games found that while teams ahead at halftime were more likely to win, that advantage disappeared when their rivals were behind by just a point. While the clear winners at the halfway point can become complacent and the distant losers can become dispirited, it turns out that being slightly behind can be invigorating.

The great power of endings as motivators was the theme of Pink’s final point. “Endings help us energize,” he said. “When the end of something becomes salient, we kick a little harder.”

Endings need to be concrete to be motivating, Pink said, pointing to a study that found that people who were given a gift certificate that expired in three weeks were five times more likely to use it than those given one expiring in two months.

“For retailers, in particular, endings are just super, super important,” Pink said. “Think about endings as a galvanizer, an energizer.”

That means that the person also has to know the end is coming. Pink shared the example of a study that gave two groups of college students a series of Hershey’s Kisses. Scientists asked the students to rate each of five candies, delivered in succession, on a scale. In one group, they were told that each chocolate was the “next one.” In the other group, they were told the final chocolate was the “last one.”

“People loved that last chocolate,” Pink said, sharing a bar chart that showed students rated the “last” chocolate much higher than the others. “I think there are a lot of opportunities for retailers to use this last chocolate phenomenon.”

People like an “ending that elevates,” Pink said, adding that this explains why people prefer to hear bad news before good news and sharing his own version of both to wrap up the talk.

Pink’s talk was a hit with booksellers who heard him, including Mary Rork-Watson of Plot Twist Bookstore in Ankeny, Iowa, who said she plans to change the order of her own day to save her e-mail for the afternoon and do her financial work in the morning. “I appreciated him bringing it back to booksellers and making some points about how you can apply it to retailing and merchandizing and to working with customers and employees,” Rork-Watson said.

Doug Robinson of Eagle Eye Book Shop in Decatur, Georgia, said that as a longtime fan of Pink, he enjoyed hearing him speak. “I thought it was excellent,” Robinson said. “I love listening to Daniel. I’ve read the book, of course; I’ve got all my notes. We’re having a storewide meeting Sunday when we get back so we can impart all this great Winter Institute information to staff.”