Wi14: ABA Past Presidents on Their Early Years in Bookselling 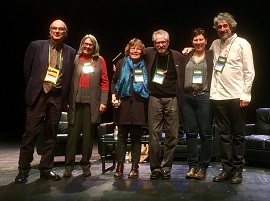 “We’ve assembled a group of former ABA presidents to share with you a little bit about their experience in the book business and a little bit about their experiences with ABA,” Teicher began. “The five former presidents here represent a long line of former booksellers who have served as ABA President, and we’re delighted that of the five who are here, they represent those who are still in the business.”

ABA Past Presidents on Technology

Teicher began the conversation by asking each of the former presidents to share what about the industry has changed most since they opened their store, as well as what they know now that they would’ve told themselves when they began their bookselling careers. Each of the presidents onstage agreed that technology has been the most significant change in their careers.

“When we opened our store,” Burton said, “we had two shoeboxes with three-by-five cards, and another shoebox for when we sold a book. We sorted them by publisher and typed purchase orders, and it was a very good system.”

Shanks said that when she opened her store in 1974, there was no such thing as buying online or the Internet. As her store grew from a tiny store to a bigger one, dealing with technology became more and more important.

“To take technology and see it as positive, I think about Edelweiss and Above the Treeline, and I think, gosh, our world is so different now,” she said. “We, too, had little index cards and shoeboxes, but now we have this ability to buy, look at our buys, and pay attention to what other stores are selling in a way that was never a possibility before.”

If she could tell anything to a new bookseller, Shanks said she would recommend becoming completely immersed in their local community: “I think we all know that as booksellers, but it comes back to us tenfold. When we first became very political, in this last particular election, you sort of run that risk of alienating or gaining supporters. My feeling is you cannot be a bookseller today and not take a stand on issues, and I think when you do that, what I have found is the support is enormous. Having that kind of integration in your community is absolutely imperative.”

From an operational standpoint, Tucker added, technology has been hugely efficient, especially in regard to social media. It completely changed Books Inc.’s relationship to its customers and how the stores do events. “Before,” he said, “if you put a $5,000 ad in the San Francisco Chronicle, it might reach X number of people. You never really knew how many people you were bringing in, how you were connecting, and the immediacy of how you were connecting.”

And what he wished he had known when he first started bookselling? “Always remember: Lift with your knees. Some things don’t change,” he said.

“One of the things I would tell anybody who’s opening a bookstore now would be to please take time for your own life. Leave it at work,” Anderson advised, but noted she knows how difficult that can be.

Teicher then asked everyone on stage to share their feelings on the bookselling industry’s relationship with publishers, which has fluctuated over the years.

“We are in a better place now,” Tucker said, recounting various lawsuits with publishers and bookstore chains from when he was on the ABA Booksellers Advisory Council. “There’s a lot more openness to hear what we need to have happen, and we’ve seen some movement in that regard, certainly in terms of margin.”

Shanks, while agreeing that the relationship between independent bookstores and publishers has improved, said there was still work to be done. “I love that they take chances with authors, that they send authors to our stores, that they feel like our reading their books and really promoting those authors is a good thing,” she said. “But, on the negative side, I think that the finances of our industry are broken.”

When she has to choose between stocking tea towels, socks, or fast-selling non-book merchandise instead of another case of books, Shanks said she feels that the system isn’t working. If putting out non-book items allows her to send another person to Winter Institute, she said, she is worried.

Burton added that the best way for booksellers to bring a publisher’s attention to this issue is to be clear regarding how valuable independent bookstores are to the business. “They don’t get the bottom line,” she said, “so they aren’t willing to give enough to help our bottom line...When you’re talking to them, give them a concrete example of how you’ve not just sold a book yourself, but sent it out there in the world and have gotten it views that it never would have otherwise.”

Anderson agreed that relationships have improved, noting that many ABA initiatives have helped on this front, and she also shared the belief that things could always be better. She added that she’s tired of having wonderful employees that she can’t offer a higher wage to, commenting, “It’s hard to replace those people who are impassioned and loved books beyond belief.... We’re not in this business to make big bucks, but we want to be able to make a living.”

On Their Term as ABA President

Referencing the ABA Board and staff, Kaplan said the highlight of his term was, “how much everyone really cared about making sure that” independent bookselling could survive. “Because we were embattled,” he said. “We battled with Amazon just getting on their feet, we still had the superstore issues, we had issues dealing with the e-books — everywhere we turned it felt like we were getting smacked around left and right.”

The best memories, he continued, were ones of working together and seeing how unselfish everyone was.

Like Kaplan, Tucker was also president during a time when booksellers were embattled. During his term, he said, the economy completely collapsed. “I remember going to Winter Institute thinking, we’re going to lose a third of the membership. There’s no business at all this Christmas, it’s crazy,” he said. “Getting there and seeing people be optimistic, I thought, what’s wrong with these people? But it was an interesting time. People sort of bucked up with that.”

During that time, he learned more about the interests of the trade, he added, and booksellers requested panels on ownership succession. “The number of stores in the last three years that have been able to turn over ownership successfully, to me, is brilliant,” he said.

During Burton’s term, booksellers brought up issues regarding the lack of diversity in the industry at Winter Institute. “We as a board knew that the diversity topic was big, and that although we had tried, we hadn’t tried hard enough. We knew that,” she said, noting that she didn’t want to get teary speaking about it. “These vibrant young people, particularly the young women, but the whole group got up there one after another with passion and conviction. They were angry and they wanted something done, but they also loved this business. They were smitten the way we all were when we first started.”

“I looked out there and I didn’t feel defensive at all,” she added. “I just thought, thank God, here you all are. Here is our future.”

On Their Favorite Author Events

Burton’s most memorable event was the one that didn’t quite happen. Her store had invited Rohinton Mistry, author of A Fine Balance and Family Matters (both Vintage) for an event, but after being strip-searched at customs in Canada, the author and his wife returned home. “It was fall and it was dark out, and this was before we could really notify people,” she said, adding that the store had asked customers to bring canned goods for a food drive. “So, we had to be there and gather the food that they brought and talk about it. It turned into an incredible conversation.”

Kaplan said that two specific events stood out to him, including the first signing event he ever hosted, which was with Isaac Singer, and a reading at the Miami Book Fair with Czesław Miłosz.

At the time of Singer’s signing, Books & Books was only 500 square feet, which was not enough room for the number of people who wanted to get a signed book. So, Singer invited Kaplan to stop by his apartment in Miami Beach to have the books signed, and Kaplan spent about five hours with Singer watching him sign books and listening to him tell stories.

“He told one story that may be apocryphal,” Kaplan said. “He had just been up to New York and his publisher, Roger Strauss, threw a party for him. He was seated at a table and people were coming up to have their books signed, and he didn’t always know who they were. There was this one very attractive woman who was finely dressed, and somehow, he got it in his mind that she was a budding writer, that she wanted to write. So, he wrote in the inscription, keep plugging away and one day success will be yours. And it was Jacqueline Kennedy Onassis.”

Shanks shared a story about Terry Tempest Williams recognizing an old high school teacher during one of her readings and stopping to go hug her, and Tucker recounted the time Dave Eggers and Daniel Handler came to his store for a Giraffes? Giraffes! event.

Teicher ended the session by asking each panelist what advice they would give to booksellers. Burton recommended that new booksellers participate in ABA’s educational sessions, and Tucker suggested that booksellers always reach out to fellow booksellers with questions. Anderson noted the importance of using books as a bridge to their community and to connect with others. Kaplan told booksellers that if they’re looking to open up a store, they should always buy the building so they don’t get pushed out by rent increases.

“I think my advice is bookselling is not going to get you rich, but it’s going to fill up your soul,” Shanks said. “After 44 years of being a bookseller, that is really the thing I want to say...I could never have woken up in the morning and said I don’t want to go to work, and I think there are very few professions in the world where people feel that way about what they’re doing. I hope you all feel like that, too.”